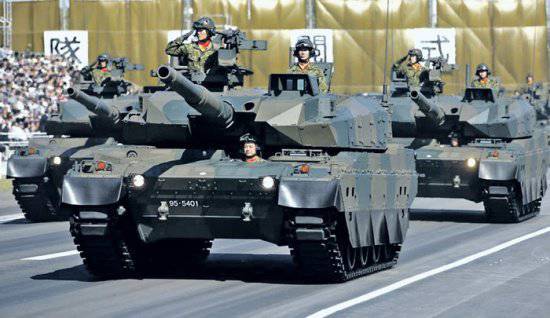 Since 1976, the Japan Department of National Defense (UNO) has published a White Paper on Japan's Defense Issues each year. This is a comprehensive report, approved by the Cabinet of Ministers, which provides an official assessment of the military-political situation in the region and outlines the main directions of military policy for the near future.

In July last year, the Japanese government approved the “White Paper on the country's defense for 2013 year”, submitted by Defense Minister Itunori Onodera. Recently, DNA issued a brief digest of the “White Book” in the form of an illustrated digest in Russian. This is a clear indication of the development of good-neighborly relations between our countries, the desire for greater mutual understanding and openness.

- The security situation around Japan.

- The defense policy of Japan and the Japanese-American system of security measures.

Japan, like any other country, is concerned about the environment, closely follows all the factors of destabilization and potential danger. And the Office of National Defense notes the aggravation and complication in a number of areas.

In particular, the invasion of the planes of the State Oceanic Administration of the People's Republic of China into the territorial airspace near the Japanese islands of Senkaku, which China calls its original territory, has been recorded. The most dangerous incident involving the Chinese Navy occurred in January 2013, when the Jiangwei II frigate irradiated with a radar fire control system, in fact targeted the Yudati destroyer of the Japanese self-defense forces.

The Asia-Pacific region attaches great importance to the US National Defense Strategy. Washington intends to strengthen relations with its allies in the region, as well as expand cooperation with partner countries. This is regarded as strengthening stability. But in Japan, the US financial situation is worrisome, resulting in a sizeable reduction in defense spending.

The White Paper provides a rough schedule for reducing Pentagon budget requests and a forecast for lowering US defense spending. The reduction could reach 500 billion dollars over 2012 – 2021's. This may adversely affect the grouping of US troops in the region. Recent trends in the activities of US forces in the region are assessed as follows.

Japan: Deploying the F-5 22 Generator and Deploying the Osprey MV-22 Converters; the redeployment of the 3rd Marine Expeditionary Division (III MEF) and ground forces to Guam, the Hawaiian Islands and other bases in the region; the deployment of F-22 fighters in Iwakuni (Honshu Island) in 2017 year.

Hawaiian Islands: change of home registry of a single aircraft carrier from the Atlantic coast to Diego Garcia base in the Pacific in April 2010.

South Korea: maintaining garrisons of American troops in the country to accommodate 28 500 people.

Singapore: rotational deployment of littoral warships (LCS). Announced in June 2011. In June, 2012 was largely agreed between the governments of Japan and Singapore. In April 2013, the deployment of the first ship began.

Philippines: Free Transfer of US Coast Guard Boats in August 2011 and May 2012.

Indonesia: donation of X-NUMX F-24 fighters (announced in November 16 of the year).

It should be noted that a number of activities planned as early as 2011 have not yet been implemented, especially with regard to the transfer and modernization of armaments.

Japan’s particular concern is North Korea’s (DPRK) actions. It is noted that the head of the DPRK and supreme commander Kim Jong-un often makes inspection visits to military units. It is assumed that he attaches particular importance to military affairs and relies on the army.

North Korea supports and strengthens the so-called asymmetrical military capability, repeating military provocations. This increases tensions on the Korean Peninsula, and is a factor seriously threatening security in all regions of East Asia, including Japan. Therefore, it is necessary to closely monitor the actions of North Korea.

Pyongyang’s nuclear ambitions pose a particular threat. Nuclear tests and an increase in the tactical and technical characteristics of ballistic missiles seriously threaten Japan and disrupt stability in the region. The launch of the rocket in December 2012 of the year, called the “launch of the satellite” by the DPRK, demonstrated technological progress to increase the range and accuracy of ballistic missiles. From this follows the conclusion that development work in the field of ballistic missiles in the DPRK has entered a new phase.

Japan has high hopes that China recognizes its responsibility as a power, begins to comply with international norms, as well as play a positive role and go for greater cooperation on regional and global issues. But while he is on the path of confrontation with neighboring countries, including Japan. And it is not clear in which direction the new PRC Chairman Xi Jinping will pursue domestic and foreign policy.

China is prone to resolving problems by force on the basis of the principle of opposing the established world order, sometimes taking dangerous actions with unintended consequences. This trend is worrying about the future of China. Now the PRC is promoting an extensive and accelerated modernization of the armed forces, and is rapidly activating activities in the airspace and at sea. This trend, complemented by the opacity of everything related to military affairs, raises concerns in the regional and global community.

China does not reveal data on its armaments, plans for the development of the armed forces, the formation and deployment of troops, the results of military training. Remains an opaque military budget. PRC defense spending is growing at a rapid pace, increasing 4 times in the last 10 years and 33 times in the last 25 years. In September, 2012, China launched the aircraft carrier "Liaoning" and continues to research and development in this direction.

The activities of China near Japan cannot but lead to the invasion of territorial waters and to the violation of airspace. Such actions are unacceptable, China must adhere to international standards.

It is assumed that one of the goals of China in the oceans is to weaken the effective control of other states and strengthen their claims to territorial superiority through various types of monitoring and observation activities and the use of armed force in the sea areas around the islands for which China claims.

Japan’s self-defense forces react to the appearance of foreign aircraft in the airspace. Aircraft self-defense air forces rise into the air if there is a risk of violation of the country's airspace. In 2012, the alarm takeoff frequency exceeded 500 times. At the same time, the frequency of response to Chinese aircraft for the first time exceeded the frequency of response to Russian aircraft.

The graph for the 2003 – 2012 years of alarm takeoff frequency is given. 10 years ago, China was inferior in flight frequency even to Taiwan, but in 2005 there was a sharp jump from 13 to 107 flights. In 2012, Chinese aircraft appeared around Japan 306 times, and Russian - 248 times (2010-m - 264 times). Additionally, there is a long list of various kinds of incidents and actions in the near waters of Japan related to the activities of the Chinese armed forces.

Against this background, Russia's military activity in the region is reflected rather weakly. The attention of Japan is attracted by the issues of modernization and structural reform of the economy, which also entail the modernization of the army. Against the background of the recovery of the Russian economy, there is a tendency to intensify military training (exercises) and other types of military activity in Russia, probably with the aim of checking and confirming the reform of the army. So it is regarded in the "White Paper".

From this we can conclude that Japan does not see the threat from Russia. She is primarily interested in economic activity. Exercises, including those that are fairly large on land and at sea, are not considered as a factor in the aggressive aspirations of the Russian Federation. This is a serious indicator of good neighborly relations.

In the South China Sea, the ASEAN countries and China confront each other, making territorial claims to the Spratly and Paracel Islands. In addition, there is a growing interest in the problem of freedom of navigation. In particular, China claims almost the entire area of ​​the South China Sea, expanding its territorial waters almost to the coast of the Philippines, Malaysia and Vietnam.

In recent years, against the background of economic growth, the countries of the region are increasing defense spending and promoting the modernization of the armed forces, mainly the navy and air force. It is clear that this is caused by the marine activities of China.

Among the new threats to stability and security, two trends are highlighted - cyber danger and international terrorism. It is noted that information and communication networks of government agencies and armies of foreign countries are often committed cyber attacks, in which the government bodies of China, Russia and North Korea are suspected.

In January, 2013, Muslim extremists seized a gas field in Algeria, killing 10 Japanese. Even Japan was among the victims of Islamic extremism.

One of the pillars of the defense of Japan is the Japanese-American security system on the basis of the relevant agreement. It is the core of peace and stability for the Asia-Pacific region. The garrisons of American troops perform the function of deterrence and emergency response. The forces of the Self-Defense Forces of Japan and the American forces conduct various types of joint military exercises.

At the highest state level, it was decided to raise the Japanese-American relations in the field of defense to a new stage. US Secretary of Defense Hagel commented that Art. 5 of the Japan-US Security Treaty extends to Senkaku Islands, and the United States will oppose any unilateral action in an attempt to change the status quo of these islands. US President Barack Obama welcomed the efforts of Japan to strengthen the Japan-US alliance, considering it very important for the US as a Pacific state.

However, in Japan, the process of relocating American troops is also under way. For example, land plots south of Kadena Airport should be returned to Japan. In January, the Ministry of Defense 2013 completed the procedures for assessing the environmental impact of the land plot for the transfer of the Futenma military airfield (Okinawa) within the prefecture from a densely populated area. This was preceded by protests from residents who demanded that the airbase be removed altogether.

Taking into account the growing situation in the region in January 2013, at a meeting of the Cabinet of Ministers of Japan, it was decided to revise the main directions of the national defense program adopted in 2010. The budget plan for the 2013 fiscal year provides for the purchase of destroyers of a new type, the modernization of DRLO aircraft and E-767 control, the purchase of armored personnel carriers and the purchase of amphibious vehicles for the defense of island territories. Defense spending increased for the first time in 11 years. Previously, they have only decreased since the 2003 year.

Self-defense forces are trained to deter and repel enemy attacks. If some islands are occupied, an operation will be carried out to free them with a landing party.

To maintain and develop the level of the defense sector, Japanese enterprises were involved in the production of the F-35 fighter. These aircraft will be purchased for self-defense air forces, and participation in their production will ensure technical safety and a high coefficient of operation. Since 2013, Japan has been participating in the final assembly and inspection of an airplane glider, in the manufacture of engine parts and radar components.

Self-defense forces have recently experienced difficulties in recruiting military personnel. The draft force has declined due to lower fertility. A negative factor was the increase in education. Women are actively involved in military service.

In February, 2013 was established a Commission to discuss the reform of the Ministry of Defense, headed by the Deputy Minister of Defense. There is a discussion of the new look of the Self-Defense Forces. To ensure their effectiveness is assumed by strict civilian control.