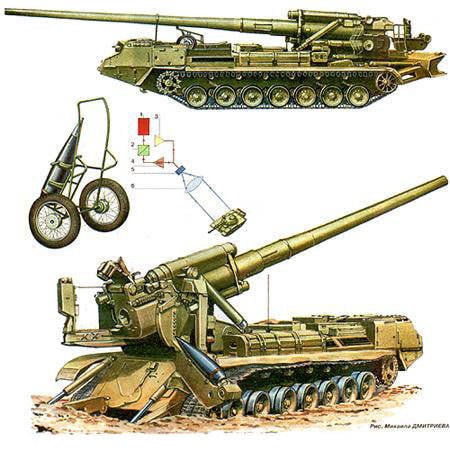 16 December 1967. The Ministry of Defense Industry adopted Resolution No. 801, which called for the deployment of research and development work on a new self-propelled system on tracked chassis. It was intended for the destruction of concrete, reinforced concrete and earthwork fortifications, the destruction of enemy long-range artillery and installations of tactical missiles and other means of delivering nuclear weapons. It was assumed that the greatest firing range should be at least 25 thousand m, while the class of the gun and the caliber had to be chosen by the designers themselves.

The designers offered several options for installing guns on a tracked chassis:
1) imposing a barrel from the 180-mm C-23 towed cannon to the T-55 tank chassis with a conventional projectile firing range - 30 km, active-projectile - 45 km. This project received the designation "Peony-1";
2) imposing a barrel from the 210-mm C-72 cannon onto an experienced tracked chassis (“429 object”) with a conventional projectile range - 35 km, active-rocket projectile - 50 km on the “429 object” chassis;
3) imposing a barrel from the 180-mm coastal cannon MU-1 (Br-402) on the undercarriage of the T-55 tank;
4) placed in the wheelhouse - on the undercarriage borrowed from the T-64 tank - 203,2-mm cannon with improved ballistic characteristics, developed by specialists of the Leningrad Kirov plant. Either the gun of the same caliber is openly mounted on the “429 object”, providing it with a folding opener that improves stability when firing.

After a lot of controversy at the beginning of 1969, it was decided to adopt the caliber 203 mm. In September, the XI NUMX of the Leningrad Kirovsky Plant presented for the consideration of the MOP a preliminary design of the ACS Pion based on the T-1969 chassis in open man-made design, and the Barricades factory on the basis of the 64 open object chassis. As a result, it was decided to develop an ACS based on the open source 429 object. By a joint resolution of the Central Committee of the CPSU and the USSR Council of Ministers on 429 in July 8, No. 1970-427, it was decided to design the 151 mm self-propelled 203,2X2 “Peony” with a range of 7 32 and conventional ammunition and 000 42 m, and a man. 000 March 1 g. GRAU approved the updated tactical and technical requirements for the designed system. They proposed to work out the possibility of using a special shot ZVB1971 from 2-mm howitzers B-203. The maximum firing range of an ordinary 4-kilogram projectile was determined in 110 km, and the minimum ricochet-free in 35 km. The firing range of the active-missile was 8,5-40 km. The design developer No. XXUMX of the Leningrad Kirov Plant was appointed as the lead developer. 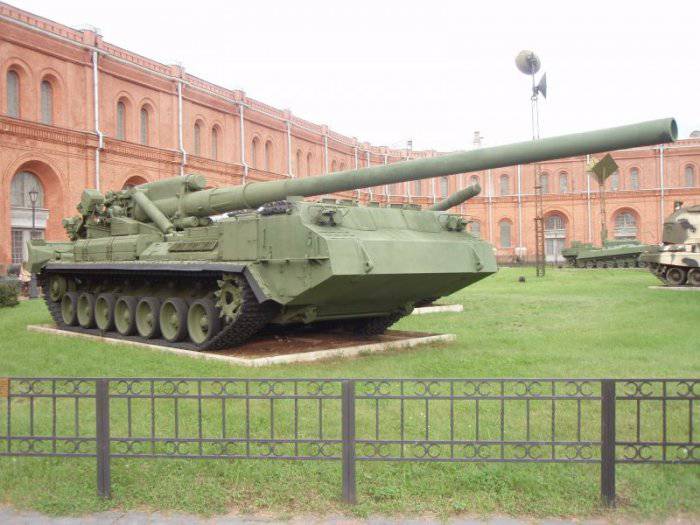 The artillery unit was developed by the Volgograd factory “Barricades” under the leadership of the chief designer GI. Sergeyeva. Artillery part Volgograd performed according to the classical scheme, but with some features. In particular, the barrel was not monoblock, but collapsible, consisting of a free pipe, casing, breech, coupling and bushings. Such trunks offered back in 70-s. XIX century. specialist Obukhovsky plant A.A. Kolokoltsev. The fact is that rapid wear of their rifled part during firing is peculiar to especially powerful artillery systems. Monoblocks that have become unusable in such cases are sent for replacement to special enterprises, which requires a considerable amount of time during which the tool is inactive. In collapsible the same operation is easy to carry out in artillery workshops located in the frontline rear.

After conducting factory and state tests, in 1975, a self-propelled gun was adopted by the Soviet Army and put into mass production. The artillery unit was made at the Volgograd factory "Barricades". A special chassis “216 object” was manufactured at the Kirov factory and the final assembly of the instrument was carried out.

In addition to the USSR, 2С7 was in service with Poland and Czechoslovakia (later the Czech Republic). At the moment (2010 year) 2C7 is in service with Russia, Ukraine, Belarus, Azerbaijan.

Self-propelled gun 2C7 is designed to perform the following tasks:
- the destruction and suppression of nuclear weapons, artillery, mortars and other fire weapons and equipment;
- destruction of field and long-term fortifications;
- suppression and destruction of rears, points and command and control bodies of troops and artillery;
- the suppression and destruction of manpower and equipment in areas of concentration and on the lines of deployment.
The self-propelled gun 2C7 is made according to the reckless pattern with the placement of the gun open in the rear part of the tracked chassis. The 2C7 consists of an 203-mm 2-44 mechanized cannon and a tracked chassis.

The 2А44 cannon consists of a barrel, a bolt, a firing mechanism, a loading chute, a cradle, a chock, a turning and lifting mechanism, two pneumatic balancing devices of a pulling type, an upper machine, sighting devices and a loading mechanism. The gun has a barrel with a casing and a two-stroke piston valve (with a plastic seal of the "bunge" type), which opens upwards. The shutter is equipped with a firing mechanism of a shock type, a special mechanical drive that allows you to automate the processes of opening and closing the shutter (in emergency mode, these operations can be performed manually), and a balancing device that facilitates the opening of the shutter. In the firing mechanism, a nest is made for a magazine of capsule tubes. The release is made using the electric release or release cord (in emergency mode). 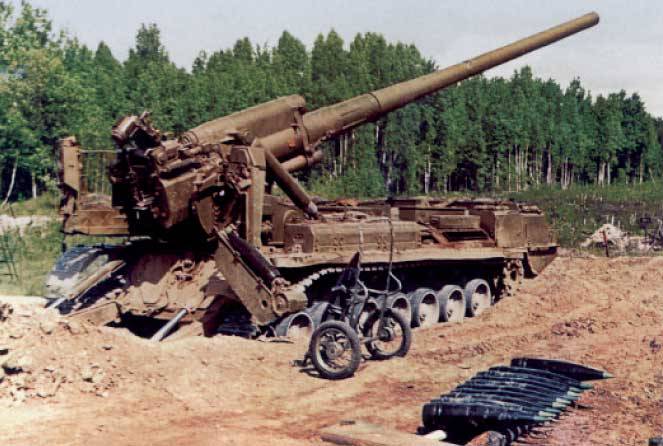 The cradle of cylindrical type is installed on the upper machine. Attached are the cylinders of the recoil device, the gear arc of the lifting mechanism, the rollback length sensor, and the bracket for fastening the aiming devices. The recoil device includes a hydraulic recoil brake with a system for equalizing the volume of working fluid and two hydropneumatic tensioners. Rollback length is no more than 1400 mm. On the upper machine mounted lifting and turning mechanisms and balancing devices. Guidance gun in the vertical and horizontal planes by using hydraulic actuators or manually (in emergency mode). The angle of vertical guidance is from 0 ° to + 60 °, the angle of horizontal guidance is ± 15 ° relative to the longitudinal axis of the machine.

The refusal to use the muzzle brake provided a muzzle wave of low pressure at workplaces and made it possible to refuse to install special protection for the calculation.

The gun is equipped with a semi-automatic hydraulic loading system that allows this process to be performed at any elevation angles of the barrel. Management of all operations of the loading mechanism occurs from the castle lock. First, a projectile is placed in the charging chamber, then a propellant charge, and at the last stage (before closing the shutter) a cap tube is manually inserted into the socket of the firing mechanism. After the shot, the used capsule tube is ejected automatically when the shutter is opened. 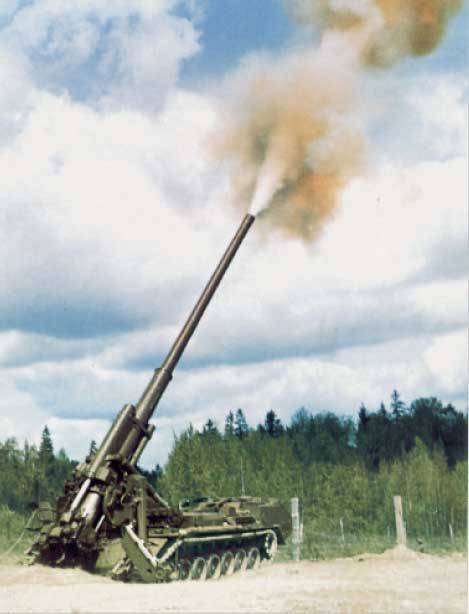 Aim devices consist of a mechanical sight D726-45, a panorama PG-1М, an optical sight OP4М-99А, an artillery collimator K-1, milestones Sat 13-11 and a lighting device Luch-S71M. The ACS can fire both from closed positions and direct fire.

For firing from a cannon, caseless split shots are used, consisting of a projectile and a propellant charge (full or reduced). Powder-type propelling charges are enclosed in a canvas sheath and are stored in an airtight container. 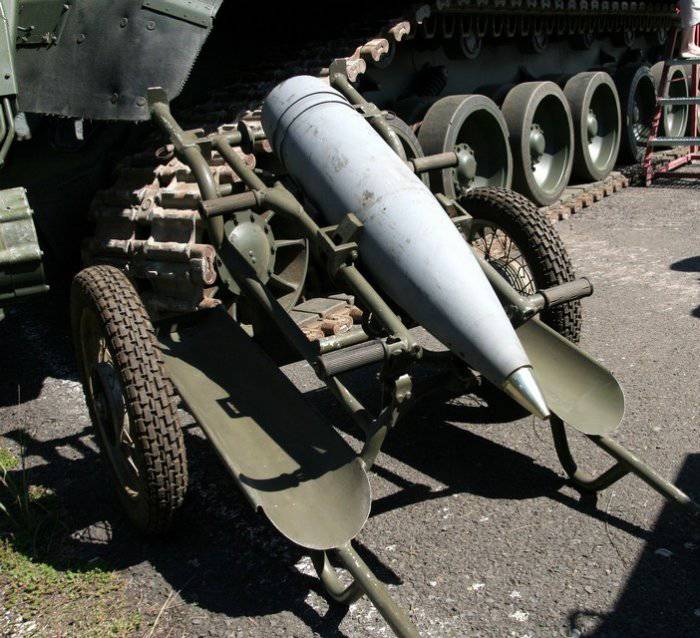 The ammunition consists of 40 shots, of which 4 are placed on a self-propelled unit, and the rest are transported in an accompanying transport vehicle.

The chassis body is a welded box-section, which the transverse partitions are divided into four sections: control, power, calculation and aft. In front of the hull there is a control compartment with three workplaces for the commander, the driver and the gunner, followed by the engine compartment with the main and auxiliary power units, the compartment for the four crew members and the aft compartment in which the batteries, fuel tanks and the store are located for ammunition. The cockpit is far ahead. In addition to its main purpose, it also serves as a counterweight to the gun mount. 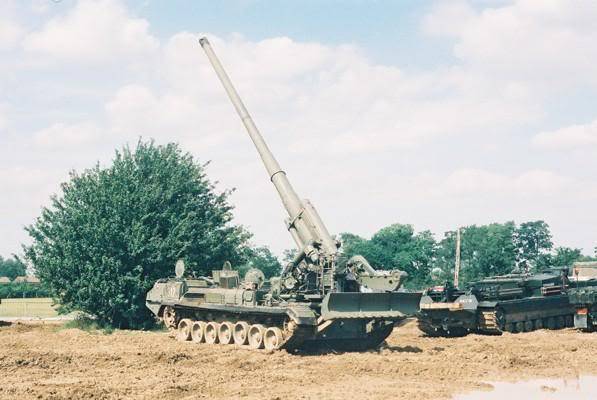 The undercarriage consists of front drive wheels, seven pairs of track rollers, six pairs of support rollers and rear guide wheels. The car used caterpillars with rubber-metal hinge and an independent torsion bar suspension with telescopic hydraulic shock absorbers (on the first, second, sixth and seventh pairs of road wheels). Many chassis nodes are borrowed from the T-80 tank. The manual transmission with a bevel gearbox and onboard gearboxes was borrowed from the T-72 tank.

For the perception of a very significant recoil force of the gun in the aft part of the chassis housing mounted down the coulter-type opener with the help of a hydraulic drive. It penetrates the ground to a depth of 700 mm and provides good stability of the gun when firing. The guide wheels of the crawler chassis, which are lowered with the help of the hydraulic drive, and also the blocked hydraulic shock absorbers of the suspension roller units of the road wheels, help to increase stability. At small elevation angles and when using reduced charges, firing of the gun can be conducted without lowering the opener.

The 12-cylinder V-shaped four-stroke diesel B-46-1 with turbocharging power 750 hp is installed on the self-propelled gun as the main power plant. The auxiliary power unit consists of a 4-9-4-6 2-cylinder diesel engine with a power of 18 kW and a gearbox with a starter-generator and a hydraulic system pump. 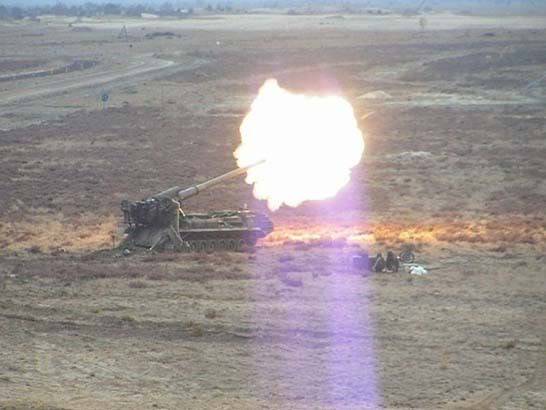 The gun is serviced by a crew of 14 people, of whom 7 is the crew of a self-propelled unit and placed on the march in the control and calculation units, and the rest in the truck accompanying the unit or armored personnel carrier. 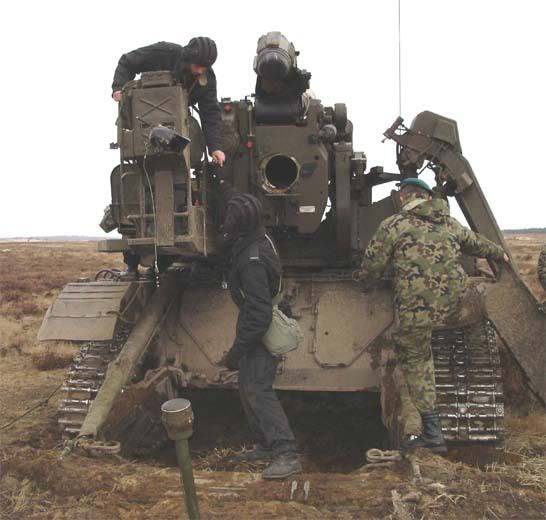 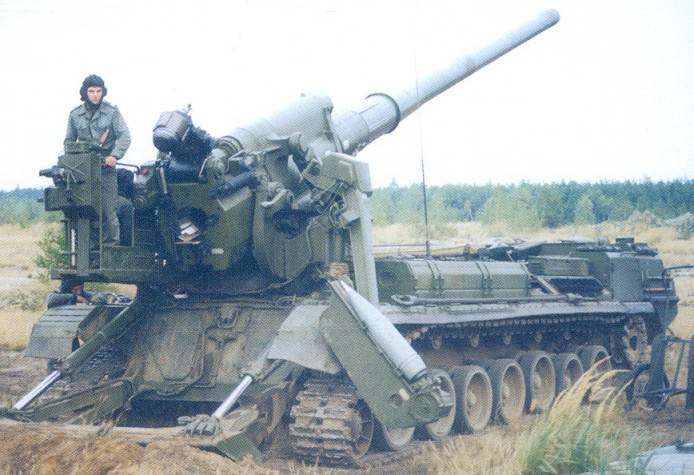 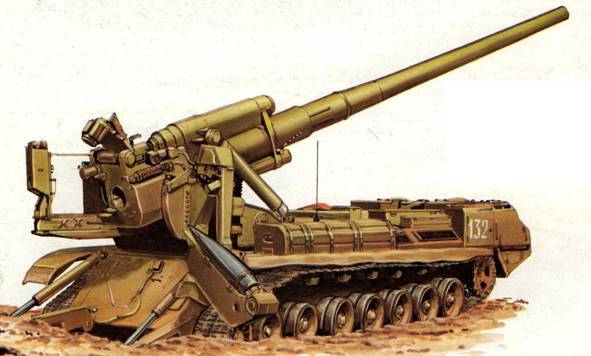