Brazil brings troops to the streets for the World Cup 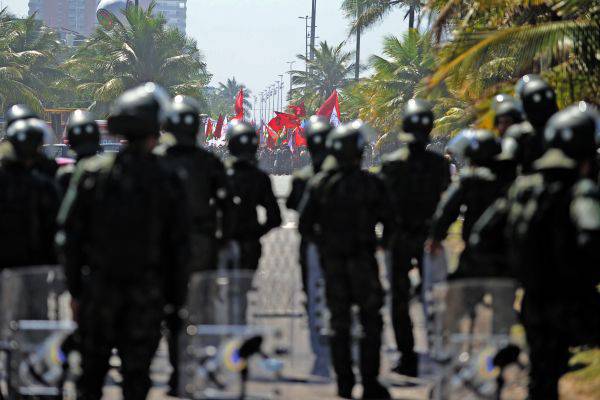 On Wednesday, in the capital of the Brazilian state of Bahia, the city of El Salvador, located in the north-east of the country, at the request of the governor, two and a half thousand servicemen were mobilized. They will perform the functions of the police, which on the eve declared an indefinite strike.


The environment was remembered by the residents of Salvador half-empty streets, closed banks and shops. At universities and many schools, classes were canceled. Those who decided to open their restaurants and small kiosks did not hide the fear of being robbed as a result of an armed attack by bandits. According to local news agencies, on this day a record number of crimes was recorded for the last time.

Entered into the city, the carnival of which is considered the second most colorful in Brazil, the troops will perform police functions until the end of the strike. And although the union declared the strike was indefinite, the local court has already rendered a verdict on its illegality. After the delivery of the court order to the trade union leader, the defenders of law and order will have a day to return to their duties. Otherwise, 23 fine thousands of dollars will be imposed on them every day. While the receipt of the court decision is not reported to the police.

In recent years, El Salvador has seen a serious increase in the level of crime, in particular, armed attacks on shops, banks and passersby. A foreign tourist, getting here an expensive smartphone, or a good camera, can experience the hard look of a dozen local residents, whose appearance does not inspire confidence. In a large number of cases, he also risks being left without expensive equipment.

El Salvador became the third city where armed forces are being deployed to protect the rule of law. The military is already performing police functions in the southern state of Bahia in the major city of Ileus.

Troops were also introduced in some slum areas of Rio de Janeiro. By order of Brazilian President Dilma Rousseff in the favel mare complex, soldiers are already helping the police in protecting the rule of law. It is planned that this operation will last until the end of the World Cup.

Entering the armed forces in the capital of the Brazilian carnival became necessary after representatives of the drug mafia returned to the policemen who had previously been cleared by the police and began attempts to return the territory that had been controlled earlier. The attackers entered into an armed confrontation not only with the police, but also with their direct competitors.

El Salvador, along with Rio de Janeiro, is one of the cities that should host the games of the World Cup, which starts on June 12. In some of the other 12 capitals of Mundial, there is also a worsening security situation. However, to a greater degree there it is connected with protests of the local population against the World Cup. Brazilians believe that the money spent on its organization could be spent on improving education and health care.

Ctrl Enter
Noticed oshЫbku Highlight text and press. Ctrl + Enter
We are
What is memorable exhibition Indo Defense 2016Military robots will guard law and order at the 2014 World Cup in Brazil
Military Reviewin Yandex News
Military Reviewin Google News
11 comments
Information
Dear reader, to leave comments on the publication, you must sign in.