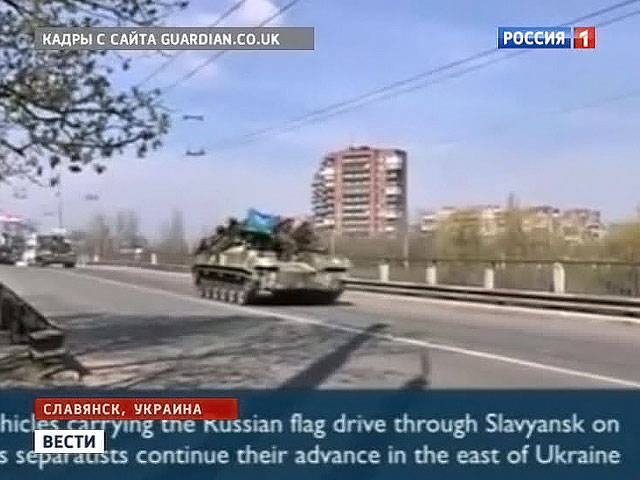 The Western press is gradually reducing the anti-Russian degree. Articles are beginning to appear in newspapers in which, at least, the position of Moscow and residents of the eastern regions of Ukraine is shown. The tone of reporting by journalists who work in the conflict zone and see everything with their own eyes is also changing.

The journalist of the American television company CNN lively argued with the allegations of the US State Department that events in eastern Ukraine are now controlled from Moscow. “No, no, there are no clear signs. There is no obvious connection between those who operate here and the Kremlin, despite what the US Department of State claims,” says Nick Payton Walsh.

The question of who these people are, who are armed, but do not resort to violence, in camouflage, but of the insignia they only have St. George ribbons, today worries the Western media. Foreign journalists working in the east of Ukraine, most often call them streamlined - pro-Russian forces. This is how a correspondent for the British Guardian newspaper describes a meeting with them in the city of Slavyansk.

“The military itself reluctantly tells journalists about who they are and where they come from, what intentions they have, and where they got armored vehicles. But most of them resemble members of the same armed militia that recently seized government buildings in the region. The rest are reported to be Ukrainian paratroopers from the neighboring Dnepropetrovsk region, who went over to the side of the rebels, ”writes the Guardian correspondent Alec Lun.

Correspondent of the influential French television channel `` France 2 '' in the final issue News expressed the opinion that the blitzkrieg conceived in Kiev in eastern Ukraine failed.

“These combat vehicles in the very center of the city, exhibited as a military trophy, clearly demonstrate the defeat of the Kiev government and the army sent to them, which, however, is located in 40 kilometers away,” says Marc de Chalvron, a special correspondent for the French TV channel.

“What is this - a police operation or practicing actions in case of a civil war? In any case, one thing is clear: the local population is not met with special arms sent by special forces sent by Kiev,” Sergio Cantone, a special correspondent for the Euronews TV channel in Ukraine, reports from Kramatorsk .

What strikes everyone, and it is impossible to hide, is the enthusiasm of the locals, who meet the militia as liberators. “You don’t expect such moods in the city, which, in fact, is under siege. This is not a holiday, but it’s obvious that people are happy and very proud of these masked people who brought world-wide fame to this small town,” says Phil Black, a special correspondent for CNN in Ukraine.

TV channels broadcast video frames as unarmed people stop heavy armored vehicles of the Ukrainian army. It is evident that the soldiers are confused, they do not understand why to fight against civilians. All this does not at all fit with the statements from Kiev about the terrorists and saboteurs operating in the east of the country.

“We are in Kramatorsk, about a hundred kilometers north of Donetsk. Residents of this pro-Russian city are holding back the Ukrainian armed forces, blocking roads. In front of you are Ukrainian soldiers, Tankswho arrived in the provincial cities of Kramatorsk and Slavyansk to defeat the invaders, pro-Russian activists. The pro-Western transitional government of Ukraine has ordered the use of force against pro-Russian activists, ”reports Christoph Wanner, special correspondent for the German television channel N24.

Unlike those who pour in from afar unsubstantiated accusations, reporters working in Ukraine deal with reality, the way it really is. But Western politicians, as if all this does not see, or do not consider it necessary to pay attention to what does not fit into their concept of information struggle.