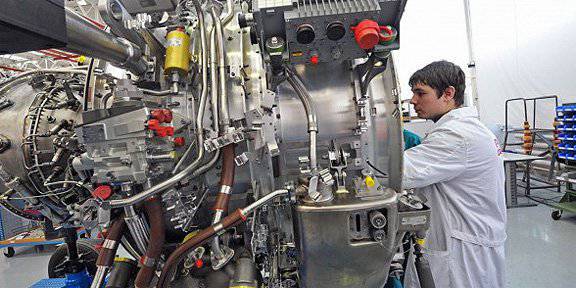 Holding "Aviation equipment »State Corporation Rostec, as part of the import substitution program of the Federal Target Program of the Russian State Atomic Energy Agency, plans to create an emergency fuel system and the main unit of the power supply system - a direct current generator by 2016. In the long term, new developments will be able to replace equipment of foreign companies, which is now being used on the boards of promising aircraft manufactured in Russia as part of international cooperation.

The total amount of investment in the development and creation of 280 million rubles. At the same time, the company's own funds will be about 33 million, the remaining funds will be government funding.

In January, 2014 of the year, Aviation Equipment Holding started the development of a fuel system for promising Russian helicopters capable of eliminating a fire in the event of an accident. Fire safety is ensured by maintaining the tightness of the fuel system during an emergency landing, as well as by using a module for inflating fuel tanks with neutral gas.

In 2014-2015, under the Federal Target Program “Development of Russian Civil Aviation Equipment for 2002-2010 and for the period up to 2015,” about 110 million rubles will be invested in the development and creation of fire-resistant equipment.

At the same time, the holding is working on the creation of the Russian DC generation system, which will provide all the onboard systems of the aircraft with electric power. In December 2015, a subsidiary of Aviation Equipment, the Ufa Aggregate Production Association (UAPO) plans to transfer the development to mass production. Investments in the creation of a promising system will amount to more than 170 million rubles.

“In Russia, no one has ever been involved in the development of such products,” said Maxim Kuzyuk, general director of Aviation Equipment Holding. “Our systems will fully meet both Russian and international requirements for quality and reliability, which will enable the holding to enter the international market already in 2016 year.”

As Expert Online explained in Aviation Equipment, import substitution plans are not associated with the threat of sanctions against Russian enterprises and with limitations in military-technical cooperation due to the situation in Ukraine.

“Back in 2012, the Ministry of Industry and Trade set the task of import substitution within the framework of the Competitiveness Program. As part of the development strategy for the aviation industry for the period up to 2025, Russian manufacturers of aviation equipment should become the main suppliers of complete systems for aircraft of Russian and foreign production. In the future, the number of foreign-made components and assemblies for promising SSJ-100 and MC-21 long-haul aircraft, as well as the latest Russian multi-purpose Ka-62 and Mi-38 helicopters, will be significantly reduced, replacing them with domestic counterparts, ”the company explained.

In particular, we are talking about those manufacturers who now supply aviation equipment to Russian aircraft. For example, the Samara-based Aviaagregat, which is part of the Aviation Equipment holding, has already successfully tested the machining process during a visit by representatives of the French company Messier-Bugatti-Dowty (MBD), the world's largest manufacturer of landing systems for aircraft. In 2014, the company will launch mass production of chassis elements in partnership with a French company. Cooperation with MBD will allow Aviation Equipment to replace the imported chassis with a Russian counterpart, and in the medium term to enter the world market as a supplier of elements and complete landing gear systems for leading aircraft manufacturers.

The newest landing gear system allows the helicopter to land at elevated vertical speeds, and also ensures the survival of the crew and passengers during an emergency landing at speeds of descent to 15 m / s. This makes it possible to use and place a helicopter on the decks of ships, including military ones. A unique feature of the landing gear (TLU) is the modular design, which significantly reduces the cost of maintenance and repair.

In total, it is planned to deliver 2025 chassis kits before 250. Funding is provided in the framework of the Federal Target Program “Development of Civil Aviation Equipment up to 2015 of the Year” and the holding’s own funds.

In the future, Aviation Equipment plans to participate in the development and supply of components and integrated landing gear and power supply systems for all airplanes and helicopters of Russian and foreign origin.

Holding "Aviation Equipment" is part of Rostec State Corporation. The holding includes 35 enterprises located throughout the country - in Moscow, the Moscow region, Ufa, Samara, Ulyanovsk, Omsk, the Arkhangelsk region and other regions of Russia. The holding's enterprises carry out their main activities in the areas of development, production and after-sales service of aircraft systems and components. In addition, the holding manufactures parts and assemblies for such industries as oil and gas, automotive, transport, energy. The key partners and customers of the company's enterprises are OJSC United Aircraft Corporation, Russian Helicopters, United Engine Corporation, Russian Railways, AVTOVAZ, Gazprom, and Aeroflot Airlines, Sibir, UTair, "Russia" and others.

Ctrl Enter
Noticed oshЫbku Highlight text and press. Ctrl + Enter
We are
World MIC - who is in the topLessons MAX-2015
Military Reviewin Yandex News
Military Reviewin Google News
10 comments
Information
Dear reader, to leave comments on the publication, you must sign in.