8 2013 June
26
The cessation of work in the USSR on the creation of almost all types of artillery armament at the end of the 50-s led to the lag of domestic artillery from the United States and other NATO countries in a number of areas, and primarily in the field of self-propelled, heavy and long-range guns. History proved the mistake of the Soviet military strategists: despite the successful development of tactical and operational-tactical missiles, the role of long-range cannon artillery in local wars did not decrease, but increased. So, at the end of 50 - the beginning of 60 - our advisers in China were in an uncomfortable position. The Kuomintangs installed batteries of American long-range guns on islands in the Taiwan Strait and opened fire on mainland China. There was nothing for the Chinese to answer. The most long-range Soviet-made X-NUMX-mm M-130 guns did not reach the Kuomintang batteries. Fortunately, one of our experts found an ingenious way out - to heat the charges and wait for a fair wind. They waited, heated and got, to the great surprise of the Americans. The USSR’s 46-mm 107-152 “Hyacinth” 2-mm self-propelled gun, the development of which began in the hard-ware of Perm Machine-Building Plant (PMZ) in December 5, became a somewhat belated response of the USSR to the American M1968. 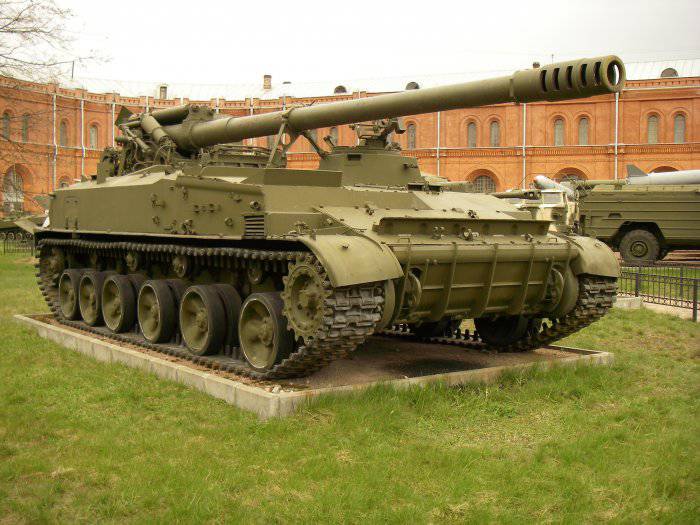 From the very beginning, the work was carried out in two directions: the towed and self-propelled versions of the gun, the “Hyacinth-B” and the “Hyacinth-S”, were created. GRAU (Main Missile and Artillery Directorate) assigned the 2А36 and 2А37 indices to these guns, respectively. Both versions had identical ballistics, and ammunition for them was developed specifically. Interchangeable with “Hyacinth” shots of other 152-mm guns in the Soviet Army was not.

SKB PMZ designed the artillery unit, the Sverdlovsk Transport Engineering Plant (SZTM) - the chassis, and the Scientific-Research Machine-Building Institute (NII) - ammunition. In September, 1969 of the year, the projects of CAU “Hyacinth” in the open (tower) and turret versions were submitted to the RAA, however, they accepted the first one. In June, the 1970 of the year resolution of the CM No. 427-151 authorized full-scale work on the ACS “Hyacinth”. In March and April, two experimental 1971-mm guns “Hyacinths” (ballistic installations) were made 152, but due to the lack of shells not provided by the Institute, they had to carry out firing from September 1971 to March 1972. Originally, the CAU planned to arm the 7,62-mm PKT machine gun, but in August 1971 decided to remove it. However, he later appeared again. By April, 1972, the projects of the “Hyacinth” were finalized and finalized in self-propelled and towed versions with separate-cartridge loading guns. An alternative variant of the Hyacinthe-BK ACS with the 2A43 cannon-loading gun was also developed. However, finally adopted separately-sleeve. Hyacinths were launched into mass production in the 1976 year, and they immediately began to enter into service with artillery brigades and divisions. 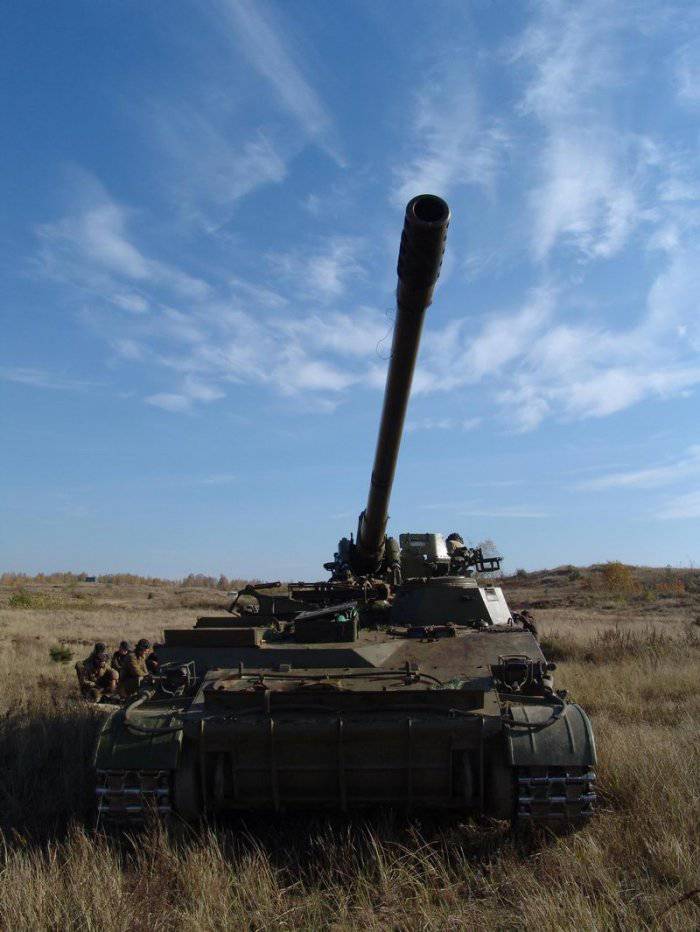 The barrel of the 2А37 cannon consists of a monoblock pipe, a breech and a muzzle brake. The multi-caliber slit muzzle brake is screwed onto the tube. Semi-automatic shutter - horizontal wedge rolling type. The hydraulic recoil brake is grooved, equipped with a pneumatic knurler, whose cylinders roll back along with the barrel. The longest pullback length is 950 mm, and the shortest is 730 mm. The electric motorized rammer collects in two stages: first the projectile, and then the sleeve. The gun has a sector lifting and turning mechanisms and a pneumatic pushing balancing mechanism.

The rotating part of the gun is a machine mounted on the center pin of the chassis. The horizontal angle of the gun is 30 °, in the vertical plane it is from -2,5 ° to 58 °. The gun is equipped with a light shield covering the gunner and some of the mechanisms from bullets, small fragments and the action of a muzzle gas wave when firing. It is a structure stamped from sheet steel, mounted on the left cheek of the upper machine. The gun’s sighting devices include a D726-45 mechanical sight with a PG-1M gun mount and an optical OP4M-91A sight. The chassis “Hyacinth” is created on the same base as the chassis of the ACS 2С3 “Acacia”. Ammunition is also located inside the case, but the projectiles and charges from the machine are delivered manually. When firing, the ACS is stabilized by means of a folding base plate-coulter placed outside the aft of the hull. For this reason, shooting on the move is fundamentally impossible. The transfer time of the car from the traveling to the combat position is no more than four minutes.

Initially, the regular ammunition was a 39 kg VO80,8 shot with a high-explosive fragmentation projectile OF-29 (46 kg) filled with 6,73 kg of high-explosive A-IX-2 and having a B-429 impact head fuse. Depending on the target, the shooting could have been one of the four types of charges used. Later, the 2C5 developed a ZVOF86 shot with an extra-range RP-59 projectile, which can be fired at a distance of up to 30 km. According to information from the Western press, the Hyacinth ammunition includes a shot with low-power 0,1-2 kT nuclear ammunition. Today in Russia several new 152-mm shells are being developed. Among them, 3-0-13 cluster projectile with fragmentation combat elements, cluster projectiles with self-targeting combat elements equipped with target sensors, directing projectiles of active and passive radio interference.

The 2A37 cannon is designed for counter-battery warfare, the destruction of long-term firing points and field structures, to suppress rear areas and command posts, to combat heavy self-propelled artillery and tanks the enemy. Sights provide firing from closed positions and direct fire. Self-propelled guns can be operated in various weather and climatic conditions. 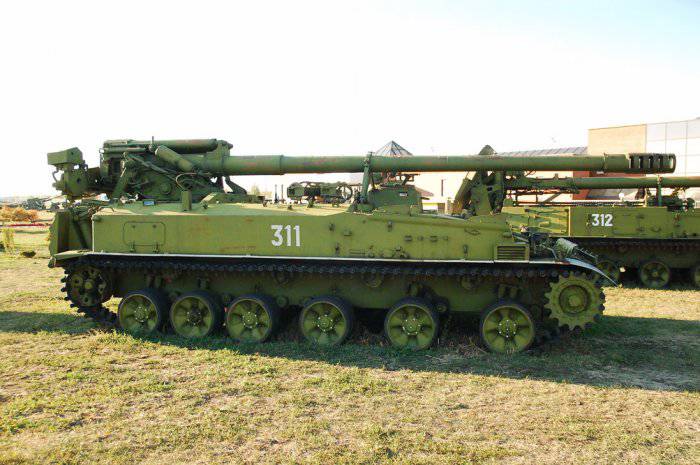 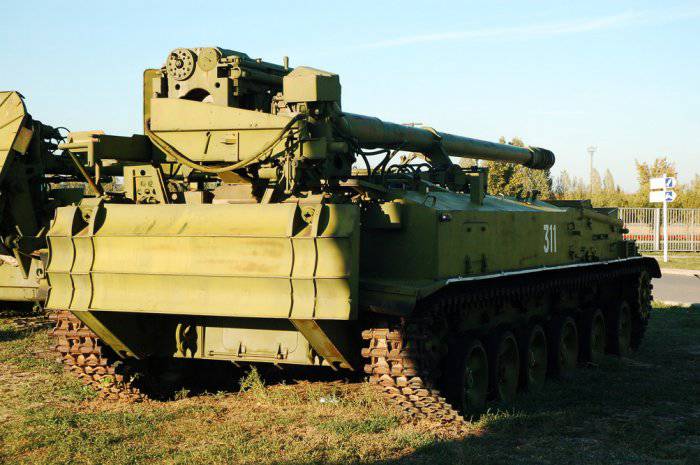 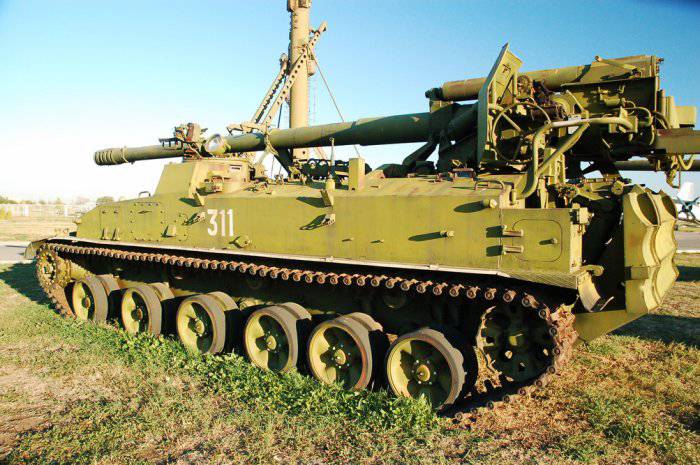