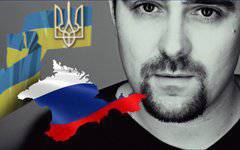 Writer Platon Besedin: Crimea showed Donbass the only possible format of dialogue with the Kiev authorities


The fact that the Crimea became Russian is logical. He has always been so - mentally, spiritually, culturally. And the more Russianness was crushed on the peninsula, the stronger it became stronger in the hearts of its inhabitants. In order to erupt at the crucial moment on offenders with the lava of righteous anger.

Euromaidan made a mistake, having forgotten: the Russian person cannot be humiliated - from this he only gets stronger to return and, finally, to take his own.

The peninsula was Russian economically. Crimean plants worked first on the Soviet Union, and after - on Russia. Ukrainian independence has sentenced them. At the same time, the destruction was of a paranoid nature: when an enterprise received an order from Russia, people from the Ukrainian government structures appeared in the director’s office, explaining that there could be no communication with the enemy.

Yes, in such conditions Crimea was doomed to become Russian again. It was necessary to raise only one question - the issue of security. And he was raised when they started talking not about the dialogue between the Crimea and Kiev, but about “trains of friendship” and intolerance towards Russians.

Having chosen Russia, Crimeans insured themselves against the bloody East Ukrainian scenario. Sevastopol did not become the Crimean Lugansk, and Armyansk - Slavic.

A few days ago I was at the Sevastopol school. The children showed numbers in Russian and Ukrainian, and Tyutchev's portrait was side by side with the portrait of Shevchenko. This is to the word about respect and tolerance, which are possible only in safe, and therefore favorable conditions. One can hardly talk about them when on the streets - either a revolution, or a counter-revolution, or a mobilization, or a military action.

Yes, there are difficulties in the Crimea, there are a lot of them. After 16 in March, Sevastopol did not automatically turn into New Vasyuki, and Simferopol - into New Moscow. But the path has begun. And never before have the inhabitants of the peninsula been so optimistic.

No examples of her are inspiring. And mistakes are taught little. Turchinov, Yatsenyuk, Poroshenko, Avakov will be the people about whom in textbooks stories write: "Guilty of the loss of the Crimea." And they can continue and add: "... Donetsk, Lugansk regions." It’s just that the defendants themselves seem to still not believe that they are capable of making mistakes. The ghost of the sinlessness of Euromaidan stands behind their left shoulder.

That is why no conclusions have been made. That is why the policy of double standards, which is deadly for the integrity of the country, continues.

Who do these people work for? To Ukraine? Hardly. If their colleague Dmitry Yarosh was categorical in his recent address: “During the war, the authorities are not criticized. It is right. But it is worth remembering another thing: during war, traitors are shot. ”

“Bullet in the forehead” is today almost a favorite saying to those who defended the new Ukraine in the squares of the country. Where are their dividends? And the new tariffs and prices - here they are, you will not be fooled.

In the country of collapse, and Parliament continues to stamp ridiculous laws. Dabbled in philology and nationalism before the loss of the Crimea, have fun with them and in the conditions of the flaming East. They did not go to Simferopol - they did not even go to Donetsk. In the Crimea, Ukrainian military units abandoned by the state stood, while “national guardsmen” were sent to the East, who, in the opinion of the authorities, apparently only dream about war with the brothers.

Donbass is even more Russian territory than the Crimea. There are no Tatars here. There have always actively voted, starting from the first of the pro-Russian sympathies. And most of the enterprises here are sharpened on the Russian market (up to 70% of exports).

The more suicidal for the Ukrainian authorities to bend the policy of double standards, repression, military suppression and appeal to the topic of Russian intervention. But she, like a kamikaze, continues to hold this course, falling under the definition of "both laughter and sin."

There is a simple explanation for this - lack of professionalism. A similar trouble has tormented Ukraine, like Russia, always: only bastards and rogues who forged successful fates in bloody squabbles sucked in on the trough, while decent people read books and prayed sins. The system was built in such a way that “troechnik” came to power.

Any structure is an example. Euromaidan, along with a dozen other Ukrainian ills hiding cancer cells in the square of the body, also extracted this shortage of personnel. In the ministers there are taxi drivers, in the presidents there are pastors.

Under become people and methods. Need to resolve the issue? We go to the assault, stock up tires. Need to agree? We blackmail, we are all Ukraine. Need to take into account the interests of citizens? We are talking about the titular nation, let the rest calm down.

But to govern the country is not to do Euromaidan. There is little revolutionary adrenaline and populist rhetoric. Here, they say, it is necessary to plow. Do not hurry. And it is unlikely to accelerate. For an adequate perception of reality is broken. New Ukrainian heroes are still there - on Euromaidan. And he will be with them, in them always.

This is Euromaidan of the brain, mixed with the effect of psychological infection. Songs and dances, promises and oaths in non-stop mode will change the mind of anyone. The feeling of unity, of the fact that everything is possible together, is certainly good, but in the context of the special prose of life, it is deadly, because other qualities are valued in it.

But many have not moved. It still seems to them that they are among like-minded people and with them - the people. In fact, now they met with all of Ukraine, including the one that they did not want to admit. And the people, even their own, are farther and farther away from them. Contact with reality is lost.

True, these characters in politics for a long time, so that after all, but they parade. The main symbol of Euromaidan in Ukrainian politics is Interior Minister Arsen Avakov. Here is a special flight of thought! How brilliantly, professionally, he disarms, surrounds enemies, collects, mobilizes wards! In Facebook.

All this might seem comical, if not ridiculous, with the attempt to, so to speak, unpretentious humor, but today in the East of Ukraine people are actually being killed and blood is being poured, and armored personnel carriers and Tanks surround Donetsk and Slavyansk. However, even in ancient Rome, the circus was a place not only for fun, but also for executions and torture.

In such conditions, it is constructively problematic to speak. Either laugh, or slaughter. Meanwhile, Donbas, like the whole of Ukraine, is in dire need of serious conversation. And, perhaps, Crimea showed him the only possible format of dialogue with the new Ukrainian government.

Ctrl Enter
Noticed oshЫbku Highlight text and press. Ctrl + Enter
We are
What you didn't want to know about EnglandList of destroyed the largest and most high-tech enterprises
Military Reviewin Yandex News
Military Reviewin Google News
66 comments
Information
Dear reader, to leave comments on the publication, you must sign in.