"Ten thousand for Moscow": the Ukrainian media about the rates for shooting people

April 17 2014
194
In Mariupol, on the night of April 17, fire was opened on the territory of the military unit against the people's militias, who came to the military to talk with them. However, it all ended in shooting. In the Department of Health of the Donetsk Regional State Administration (RSA) they talk about two dead and fifteen wounded, reports Interfax.


It is noted that "information about the identity of the dead and wounded is not." Earlier, the head of the Ministry of Internal Affairs of Ukraine, Arsen Avakov, reported that during the "attack" on a military unit of the National Guard in Mariupol three attackers were killed, 13 people were injured, 63 were detained. According to him, "there are no losses among the employees of the Ministry of Internal Affairs".

Meanwhile, on one of the Ukrainian Internet portals, information appeared that the Dnipropetrovsk oligarch Kolomoisky, the commander of the unit, would pay 500 000 hryvnias (about 42 thousand US dollars at the current rate) for shooting unarmed Mariupol men.

In one of the social networks, according to the Russian Spring portal, Kolomoisky’s deputy Boris Filatov, who became famous for the phrase: “We must make any promises to the scum, and we will hang them later.”

"And yet. It was decided to pay 500 000 hryvnia to the personnel of the military unit of Mariupol who repelled the attack. Please contact the commander. Or we will find you in the evening," wrote Filatov. 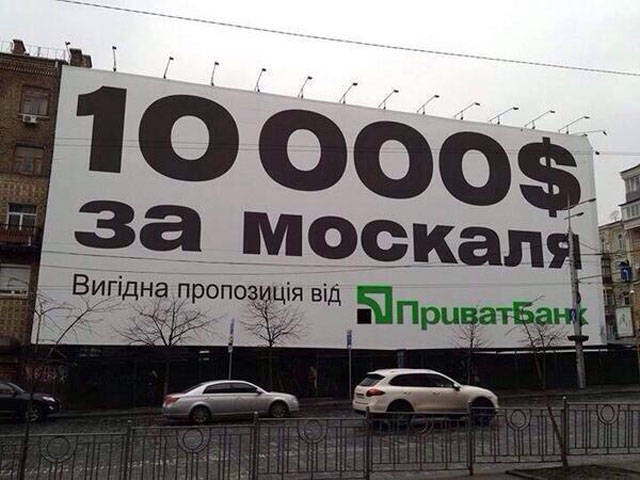 In addition, a photo of the "advantageous offer" from one of the Ukrainian banks has spread on the Internet. In particular, news portal "Press of Ukraine" reports that "in troubled Donetsk and Lugansk, where armed pro-Russian separatist terrorists are operating," a new social advertisement appeared. The banner says: "A favorable offer from PrivatBank: $ 10000 for Moskal." 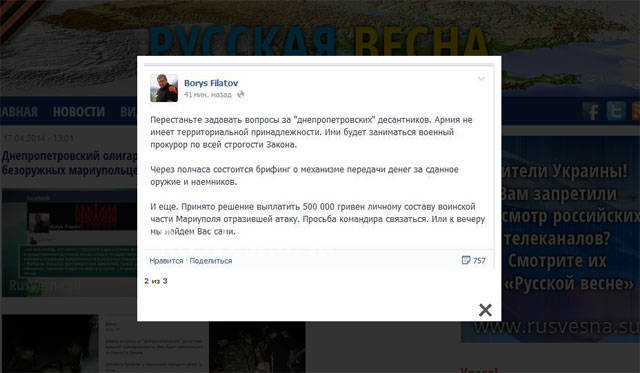 "As you know, the leadership of the Dnipropetrovsk region, headed by Igor Kolomoisky, established a reward for the capture of Russian mercenaries and surrender weapons. For each green person transferred, the 10 reward is thousands of US dollars, ”reports the Ukrainian news portal.

I'd like to hope that after all this photo is a fake. However, it is well known that PrivatBank, whose main office is located in Dnepropetrovsk, was founded by its current owners, Gennady Bogolyubov and Igor Kolomoisky.

At the same time in March, it was reported that the Dnepropetrovsk oligarch began to dump its assets in Russia: in particular, Kolomoisky put up for sale Moskomprivatbank, a subsidiary credit institution of the Ukrainian PrivatBank.

In response to a statement by leaders of the Dnipropetrovsk region about reward for the capture of pro-Russian activists, a Kazakhstani businessman opened a Ukrainian safari.

Taychibekov said on the social network that he would pay a million rubles to anyone who caught or liquidated Igor Kolomoisky’s emulator from Dnepropetrovsk region.

At the same time, Taichibekov presented a list of all enterprises owned or co-owned by Kolomoisky. Taychibekov after receiving evidence promises to transfer the "grant, fee, premium" on any bank card.

At the same time, a Kazakhstan businessman set a time limit for completing the task. "Hunting season", as Taychibekov wrote, is open until 1 this May.

http://rusvesna.su
Ctrl Enter
Noticed oshЫbku Highlight text and press. Ctrl + Enter
We are
“Russian Spring” on the festival of colors in Kiev and bloodshed in the Donbas
Military Reviewin Yandex News
Military Reviewin Google News
194 comments
Information
Dear reader, to leave comments on the publication, you must sign in.