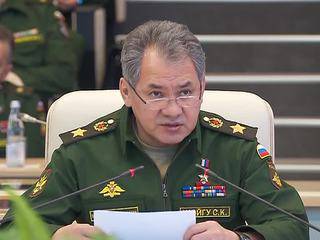 Russian Defense Minister Sergei Shoigu believes that the Kiev authorities' statements about the involvement of Russian special forces in the events in Ukraine "look like paranoia." He is sure that after these words it is impossible to take the actions of Kiev seriously.


"With regard to the allegations of the use of Russian special forces in the events in Ukraine, I will say only one thing - it is difficult to look for a black cat in a dark room, especially if it is not there. It is even more stupid if this cat is clever, brave and polite," the minister quotes ITAR-TASS. According to Shoigu, statements by SBU chief Valentin Nalyvaychenko were perceived by the Defense Ministry "with deep surprise." In general, after such statements, he gets the impression that the only combat-ready units in Ukraine today are various press centers.

The Russian defense minister is confident that the Kiev authorities should stop looking for “the hand of Moscow” everywhere and instead stop calling residents of the south-east of Ukraine separatists.

or terrorists and start a constructive dialogue with them.