The Northern Fleet is preparing to receive new submarines 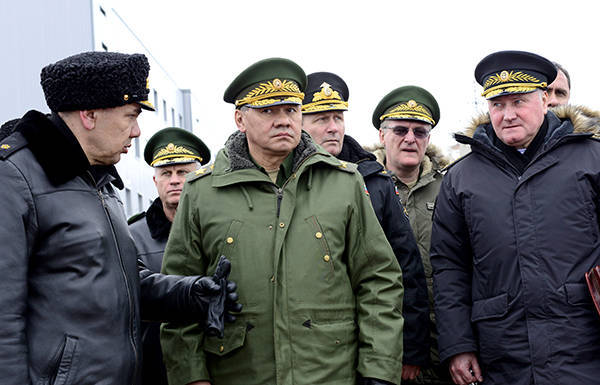 Russian Defense Minister Sergei Shoigu inspected the garrison of North submariners fleet Gadzhievo, which is being prepared to receive submarines of the Borey and Ash-tree class. There, for the first time, the military is implementing a new strategy for basing nuclear-powered ships. Its meaning is that the boats standing near the mooring wall are supplied with electricity, heat, purified water for nuclear reactors and other necessary components around the clock.


According to the commander of the submarine forces of the Northern Fleet, Alexander Moiseyev, "this will save the life of ships for its use when they leave the sea." The admiral showed the Minister new objects and gave detailed explanations. In particular, he reported to Shoigu on the commissioning of the first-line coastal infrastructure and berth No. 17. Sixteenth sailors should take in June. Its construction is now engaged in 4-e management Spetsstroy Russia.

Seen the heads of the military department, it seems, was pleased.

"Continue to continue to work as well, while everything is going fine with you," he said to Moses.

Having looked at how the submariners' families are set up in Gadzhiyevo, the Minister ordered to start their holidays in departmental sanatoria of the Crimea with the beginning of the holiday season. And in the town decided to create a cultural center. It will complement the universal sports and training complex already existing in Gadzhiyevo.

- The doors of the cultural center should be open not only for the garrison servicemen, but also for all residents of the military town. There must be provided for various circles and sections for children in the interests of their full development, - said Sergei Shoigu.

A less pleasant conversation with the minister was awaiting the leaders of the Zvezdochka Ship Repair Center and its branch, the Nerpa Ship Repair Plant. At a meeting in Severomorsk, Shoigu demanded that they increase the pace and efficiency of the work carried out in order to prevent backlog and disruption in the execution schedules of the concluded contracts. This is all the more important since the Defense Ministry is fully and on time fulfilling its obligations to finance them.

The head of the military department recalled that there was a plan in the ministry before 2020 for technical re-equipment of the army and navy, which was planned for each military unit.

“It is clearly defined there, at what time, where, what equipment should arrive, what infrastructure should be built, what training of personnel should be carried out,” Shoigu said. - We have everything tied up in a single complex, synchronized with the commissioning of the social and military infrastructure, so it is necessary to strictly observe the deadlines for the supply of ships to the fleet.

Meanwhile, the Northern Fleet is awaiting a major update. In the next five and a half years, 6 multipurpose nuclear and non-nuclear submarines, 2 large landing craft, a destroyer destroyer of the new project, as well as 5 frigates, 5 base minesweepers and 21 support vessels will go there. This will allow North Sea residents to more effectively protect Russia's national interests, both in the Arctic and in other areas of the World Ocean.

Recall that the cardinal re-equipment of the Federation Council began last year. In January, the 2013 fleet was replenished with the latest strategic missile submarine, the Yuri Dolgoruky. It is the lead ship of the Borey-class 955 project. In December of the same year, two more new ships entered the Navy - the strategic rocket carrier Alexander Nevsky of the same project and the multipurpose nuclear submarine Severodvinsk, whose crews will improve their naval skills in the Northern Fleet. The situation with the modernization and repair of submarines has somewhat improved. The nuclear submarine missile cruiser Smolensk, the strategic missile submarine cruiser Verkhoturye and the diesel-electric submarine Kaluga have returned to operation.

Ctrl Enter
Noticed oshЫbku Highlight text and press. Ctrl + Enter
We are
Russian submarines project 885 "Ash" will compete with the American submarine fleetIn the near future, the Russian Navy will include seven multi-purpose nuclear submarines Yasen and Yasen-M, the commander in chief
Military Reviewin Yandex News
Military Reviewin Google News
24 comments
Information
Dear reader, to leave comments on the publication, you must sign in.