The world may be on the verge of nuclear war 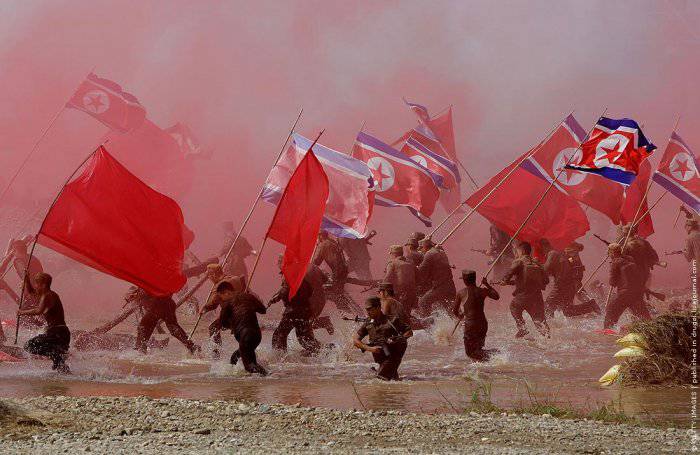 The world map may soon be replenished with another hot spot, and hostilities that can start at any time threaten to escalate from a local confrontation into a war in which many countries of the world will be involved. We are talking about the possible beginning of a military confrontation between North and South Korea. So, 25 of April on the pages of the electronic directory of the Ministry of Defense of the Russian Federation "Weapon Of Russia ”was published a message about the deployment of South Korea on the islands of Yonpyendo and Pannёndo, located in the Yellow Sea, Kuryong 130-mm jet propulsion systems. The missiles of the deployed system are aimed at the territory of the DPRK. Kuryong units are equipped with 36 guides for launching missiles that are capable of hitting targets at a distance of 36 kilometers. In Seoul, it is indicated that their installation exceeds the fire capabilities of similar systems available to the DPRK. The South Korean government regards its actions as protection against a real threat from Pyongyang.

South Korea and the DPRK for more than 60 years continue to be in a formal state of war. The peace treaty, signed in 1953, remained on paper, in reality, states periodically enter into armed confrontation. The current confrontation broke out in connection with the collapse in March 2010 of the South Korean corvette Cheonan in the Yellow Sea, which, according to Seoul, was hit by the North Korean torpedo. As a result of this, 23 in November in the area of ​​Yonpyendo Island, through which the controversial line of separation between South Korea and the DPRK runs, an armed incident occurred, the largest in the region in the last half century. According to reports from Seoul, the territory of the island was shelled by the northerners, and the Southerners fired back missile fire. As a result of the incident, two South Korean servicemen were killed and 17 were injured. One of the reasons for the conflict in the Yellow Sea was Pyongyang’s refusal to recognize the northern boundary line in the Yellow Sea, which was unilaterally carried out by the Americans after the Korean War during the 1950-1953 period.

In essence, the DPRK and South Korea are a single nation that was artificially divided in the year of 1945, and over the course of the years of the 66, virtually a national conflict has occurred. The separation resulted from the capitulation of 10 on August 1945 of Japan, which at the time ruled Korean territory. The United States and the USSR decided to divide Korea along the 38 parallels. According to the plan, the units of the Japanese army, located on the northern side, were to surrender to the troops of the Soviet Army, while at the same time the troops of the Japanese army remaining in the southern part were to be capitulated by US generals. For this reason, the peninsula was divided into two completely different camps. At first, this division was planned as temporary, but later two different states were created - the DPRK with the capital Pyongyang and South Korea with the capital Seoul.

But the United States, using bases located in the south of the Korean Peninsula, began to expand the “zone of state interests” in the Pacific region. Of course, this could not but cause opposition from the USSR and China, which provoked an armed confrontation between South Korea and North Korea, which lasted from 25 June 1950 to 27 in July 1953. In practice, it was a confrontation (unstated) between the United States and its allies and the forces of the USSR and the PRC. The northern coalition consisted of: North Korea and its armed forces, the Chinese army, the USSR, which did not officially take part in the war, although in many respects assumed its financing, and also sent air force units and multiple army experts and advisers to the Korean Peninsula. From the South, South Korea, the United States, England and a number of other states united in the UN peacekeeping forces participated in the war.

After eight years of confrontation, 27 July 1953 was signed bilateral agreement on the truce in Korea. In order to separate the opposing sides, a special military demarcation line was established, crossing the Korean Peninsula along the 38 parallel and located in 62 km north of Seoul and 215 km south of Pyongyang. The only inconsistent area remained the sea border in the Kanhvaman Bay water area. The United States unilaterally 30 August 1953 of the year established the northern boundary line, the existence of which Pyongyang does not recognize, indicating that North Korea was deprived of a significant part of the water area belonging to it on the basis of the Armistice Agreement.

For the first time, Pyongyang officially demanded a revision of the borders in the Kanhvaman Bay water area and made demands on a number of islands in early December of 1973. There were no ambitions in this, but purely economic interests prevailed, primarily due to the fact that the disputed area is very rich in fish resources. During the 1977-1978 period, both Korean states, adhering to the norms and laws of international maritime law, considered and unilaterally adopted legislation that established economic zones and divided 12-mile territorial waters, including Kanhwaman Bay. This confused the situation even more with SLL. At the end of the 90-ies, the North Korean leadership unilaterally established a “maritime boundary line” (MRL), extending significantly south of the SRL - at points located at an equidistant distance from the coast of the DPRK and the ROK.

In reality, today, despite the huge number of by-laws, the issue of the maritime border in this region is still not settled, which creates conditions for the frequent exacerbation of tension. Given the ongoing conflicts, both the DPRK and South Korea continue to maintain powerful ship groups in the Kanhwaman Bay region. All this only warms up the already tense military component of the conflict. By and large, it is necessary to conduct a negotiation process that would equally take into account the interests of each of the opposing sides. But the United States by all means interferes with this; this is due to the considerable interest of the Americans in this region.

It must be recognized that this region has always been within the sphere of US interests. Given China’s rapid economic and military growth, this region is seen as strategically important for the United States. China is currently more supportive of the DPRK, but, given the growing criticism towards official Pyongyang for conducting nuclear tests, the political vector may change, all the more so that politicians from Washington are pushing for it. The US media openly discusses the growing tension around Korea and the creation of favorable opportunities for establishing significant US military and political influence in the region. American politicians have long demonstrated significant concern about the increased activity of the Chinese Navy. And the opportunity to respond to the aggressive behavior of the DPRK creates an excellent excuse for increasing the arms race by South Korea, the United States and Japan, which, in fact, is already happening. Not long ago, a series of US-South Korean exercises were held; intensified and the conduct of intelligence activities of the Allies in the Yellow Sea. The presidents of the United States and South Korea signed an agreement on joint nuclear protection of the territory of South Korea from the treacherous northern neighbor. A representative of the presidential administration, Barack Obama, made an official statement that Washington would not prevent Japan from delivering a unilateral preventive strike on North Korean military and nuclear facilities, and would fully support the modernization of the forces intended to increase the strength of such a strike. For the first time since the end of the Second World War, Japan was granted the right to start a new wave of militarization. But an obstacle to the plans of Tokyo was an earthquake, which significantly shaken the economic situation of the country. In response, the DPRK began preparing to launch tactical ballistic missiles capable of hitting targets in the United States, and began at an accelerated pace to withdraw its finances held in foreign banks.

Events on the Korean Peninsula cause concern among the world community. First of all, this is due to the fact that huge stocks of strategic nuclear weapons are located here. Many experts see the main threat in North Korea, given the unpredictability of the regime ruling in Pyongyang.

In the region, four countries have a nuclear arsenal in service. Russia, China, North Korea and the United States not only have a powerful potential, but can apply it at any time.

At the moment, the situation is extremely tense, and no one can predict with confidence how events will develop in the future. Positively, the issue will be resolved only if the politicians' ambitions do not exceed their common sense.
Ctrl Enter
Noticed oshЫbku Highlight text and press. Ctrl + Enter
Military Reviewin Yandex News
Military Reviewin Yandex Zen
3 comments
Ad