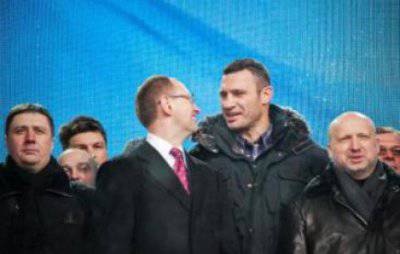 When they ask me what is happening in Ukraine, I answer shortly: in the fake state, a fake revolution broke out between fake revolutionaries against fake power, as a result of which a fake junta was established, which launched a fake civil war. It’s not just the king naked, the whole kingdom is pornographic naked.


Yesterday, terrible reports about bloody battles near Kramatorsk appeared in the media, and today around the city they cheerfully roll under the Russian flags on anti-terrorist forces APCs of the Donetsk Republic militia embracing the Donbas suppressors.

It turned out that there was no battle for the airfield. It was just that the locals tried to control the semi-abandoned military facility with their bare hands, and its watchmen called for armed reinforcements, which fired the people away from the airfield building.

In response to this, standing up along a barbed wire fence, the residents of Kramatorsk showed obscene gestures to those in the depths of the territory of the Ukrainian military and shouted: “Bandera, bring home! Who are you going to shoot ?! Who was shot ?! ”

During the “battle” for the airfield, as it should be, a Ukrainian fighter flew in the sky and let in for the beauty “heat traps”, which successfully replaced the fireworks.

More over Kramatorsk was "shot down", as it later turned out, fake Syrian helicopter-plane.

And at this time, near the city of Rodnenskoye, Donetsk region, local residents captured with the help of a Niva car and a three-story mat during persistent “battles” Tanks"Anti-terrorist contingent." From the faces of the tankers it was clear that they saw a pastor and a “speech therapist” with their “anti-terrorist operation” in a deep, dark and indecent place. The boys clearly did not understand where the enemy was, which must be ruthlessly, as Tymoshenko calls, to shoot from the tank. Around only evil, but absolutely their men, who can fill the face for the “war”.

There is a feeling that all the so-called “armed forces”, which will send Kiev to the South-East, are doomed to quietly and completely dissolve into Donetsk cities and villages. Despite the frenzied hysteria in the media, the image of an enemy in the form of the South-East does not add up in the mass consciousness of people. And to do something bad YOURSELF, without understanding why, no one is burning with desire. Therefore, all hope is now on a separate shock battalion formed from deputies of the Verkhovna Rada, journalists from the Kiev media, party activists and members of the current government. Why are the most ardent supporters of hostilities in the South-East still not mobilized? They even weapon no need to give. There is so much hatred in them that with her psychic fluids she will kill all life within a kilometer radius. It is foolish not to use this potential.

In general, while the struggle continues ...

If we proceed from the facts, then this whole so-called “anti-terrorist operation” of Kiev rather resembles an anti-terrorist imitation. Obviously, the American commanders of the Kiev regime demand decisive action from the pastor, and he, in order to please them, organized a fake army and began to carry out a fake special operation. After all, the fake power cannot do something that is not fake, just as a hyena cannot give birth to a lion.

It is strange that so far not all cities of the Donetsk region are under the control of the Donetsk Republic. Obviously, they simply have not reached their hands.

Interestingly, during the “battle” for the Donbass, the 20 of the brave American mercenaries disappeared along with their curator from the CIA. Of course, I am not a psychic, but gentlemen are surrendering to me that they were dragged off by “green men”. It will be funny when, against the background of hysterical cries about the presence of the Russian military on the territory of Ukraine, American fighters will suddenly appear at a press conference in Donetsk, who, broken in fear, will speak in pure English about who they are and why they came to Ukraine. But according to the assurances of Washington, there are no American citizens (especially armed) on Ukrainian territory.

That would be Vladimir Vladimirovich’s funniest joke in recent months.

In the meantime, the revolutionary masses are fermenting in Kiev. In recent months, the people have yearned for revolution. Bored hundreds of “Maidan” want to take something by storm or catch some enemy of Ukraine. The last time the revolutionary energy of the crowd was redirected from the Verkhovna Rada to Oleg Tsaryov and the Kiev "Berkut". But what will happen when “enemies of the people” end in Kiev? I would have thought about this in the place of the new government. After all, if the “guard gets tired”, neither the “struggle” with the separatists nor the ardently correct speeches from the tribune of the session hall will save them.