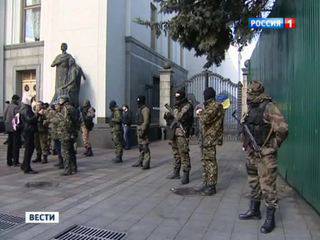 Kiev continues to pull military equipment to the southeast of Ukraine. To combat peaceful protesters, everything that goes and flies was raised on alarm: Tanks, armored vehicles, planes and helicopters. All this, however, so far exerts only psychological pressure. The story of what will happen if combat vehicles begin to be used for their intended purpose.


Troops that were pulled into the town of Izyum in the Kharkiv region are now making a forced march. They left the village before dark, although during the day everything was filled with military equipment, and about two thousand soldiers were based in the residential sector. They went to the Southeast. Where regular troops met local residents, the military was constantly asked the question: why do you need so many weapons, ammunition, against whom? The soldiers themselves do not understand.

To the south of Raisins - above the residential buildings of Kramatorsk - the Ukrainian Air Force arranged, as they said here, the local le Bourget. In the clouds - the full range of active combat aviation. With full ammunition under the wings. MiG-29 front-line fighter charged with missiles to the eyeballs. Su-27 fighter in combat peak. And these are the maneuvers of the SU-25 Grach - also armed. The landing in the fields in the suburbs was provided by the Mi-8 military transport helicopters. And they covered the operation from civilians, also hung with weapons, the Mi-24.

The West of Ukraine, as soon as he could, equipped the so-called National Guard in a military campaign against the residents of Donbass. In addition to the regular army - conscripts and contract soldiers - internal troops were involved.

Their unit of special forces "Omega" participated in the confrontation of euro-makers in February in Kiev. And the special unit of the SBU - "Alpha", equipped not only with Kalashnikov assault rifles, but also with imported high-speed assault weapons.

To the East rushed heavy tractors with howitzers, able to level any city to the ground. And rocket mortar systems of volley fire "Grad", which do not leave anything alive after them.

On the tracks of the Donetsk region went tanks: T-64, T-72, T-80 - all that Ukraine has. Numerous light armored vehicles: BRDM, BMP, BMD, BTR - everything that the army was rich with.

The National Guard was urgently replenished with reservists from the western regions. Under the gun got those who were listed in the reserve. Willingly joined the Guard ranks and the "Right Sector". Over 350 militants who had previously undergone special training in nationalist camps. We were pleased to try on new camouflage seventeen-year-olds who were inspired by the ideas of Bandera and Shukhevych.

This came to the East National Guard "liberators".

“Automatic weapons will be handed out without any verification of their biography, criminal record and other relations with the law. That is, these are sounder teams - that’s already reached what! That is, an attempt to spread the Bandera movement in general to the whole of Ukraine,” Timoshenko was horrified.

In other words, the recent initiative to disarm the "Right Sector" - repeatedly proclaimed by the appointed Interior Minister Arsen Avakov turned out to be a farce. The "Right Sector" is now armed to the teeth. In Izum, they silently shoveled food and cigarettes from the stores.

Ctrl Enter
Noticed oshЫbku Highlight text and press. Ctrl + Enter
We are
Reports from the militia of New Russia for 2 September 2014 of the year
Military Reviewin Yandex News
Military Reviewin Google News
26 comments
Information
Dear reader, to leave comments on the publication, you must sign in.