Once again about Ukraine 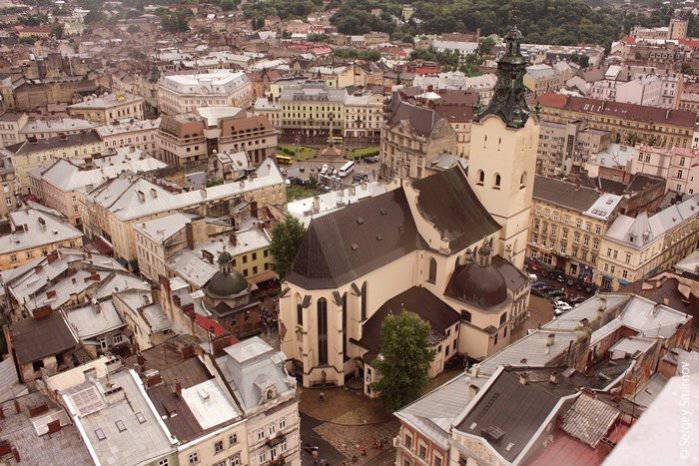 For two months now, Ukraine, and Russia lives with it the news from the "non-occupied". Articles, opinions, analytics, reports, from the Maidan, from the Rada, from Odessa and, finally, from the Southeast. Started история, like a strange and funny vaudeville, begins to turn into tragedy.

We are shown hourly representatives of the “Right Sector” and enter into the head that they are direct descendants and heirs of Bandera, Shukhevych and the rest. On the sleeves of the swastika, in the heads of a hodgepodge of Goebbels, Hitler's speeches, etc. Actions are not discussed at all. They explained to us where they came from. We believe. More precisely, many believe.

I want to tell one story. She is almost thirty years old. Back in 1986, I arrived in Lviv. Having lived there for two days, I ended up in the same house. The owner of this house is an elderly professor, a teacher at the Lviv Medical Institute, and a head of the department. He invited me to his office, offered to sit down and went to make coffee.

In the big room there was enough space for good furniture. There was a piano by the wall. Older people remember the time when children were taught to play various instruments. Those who were richer purchased pianos for their children. And, as I remember, they put vases, elephants, lamps on it. And some put the photo in frames. That photo in the frame caught my attention. I got up, walked over, looked closer and could not believe my eyes.

In the old photo was captured a young man, slim, taut, smiling. He was dressed in the black uniform known to me from the films about the Great Patriotic War. SS form. I stood amazed.

The master has come. Brought coffee. Saw my confused and bewildered look. He paused and told.

When the war began (he did not say, as we say, the Great Patriotic War), he had just graduated from the medical institute and underwent an internship. Those. He has not yet become a full-fledged doctor. The Germans came. Learned about his specialty. Caused where necessary. The question was put bluntly - either you serve us or in a concentration camp. “I chose the first,” he said. He paused and added: “I did not kill anyone.” I treated. "

It is necessary to understand that, on the one hand, I am a man of the Soviet system. My inner world is sharpened so that I will never accept this brown ideology. My father, my uncles, fought, shed blood and died for this country. Fought with the carriers of this ideology. And he calmly compromised with his conscience.
I thought so. The visit was crumpled. I said goodbye and left.

We Russians are always hypertrophied and pitiful to everyone without exception. True, there are cruel. If dopekut.

So here. After a while I began to justify him in my soul. I tried to put myself in his place. It turned out all somehow uncertain, crooked and askew. But the Komsomol upbringing and membership in the CPSU did not let me completely soften. I decided that he was a scoundrel, but already punished. After all, he served ten years in the camps after the war ...

At this all could be forgotten.

Thirty years have passed. What we see. Yes, all the same that was in Germany in the 30-ies. Again torch processions. Again, trimmed strong guys with a swastika. Again, nudging everyone who disagrees with their philosophy. And the question arises.

And when were the conditions created for the formation of such a philosophy? Do you think after the collapse of the USSR? I think otherwise. After all, the professor, after serving ten, got a job safely. And where? In medical school. To teach children.

They are like him, with such a worldview, and taught everything they knew themselves.

Sometimes a wave of indignation rises at Stalin in my soul. For the fact that he showed perverse softness to the western Ukrainians.

Yes. Were Bandera. Fought with weapons. They are definitely enemies. They must be punished. And punished. But they ran through the woods until 53. Someone fed them, washed them, treated them. They had children. These are the ones who helped them, who are they? Our brothers and sisters?

I recently read an excerpt from an interview with Kuchma (and maybe Kravchuk, I don’t remember). So here. This "man" talked about how the kid ran into the woods, carried food. To whom? Bandera.

So. It was necessary to take all the Western Ukrainians in the polar zone of the USSR. For a period of 25 years. With pre-sterilization. The children of nonsense give hands. And everything would be fine now. And so we with the thoughts well can not decide.

And what do we do now with Ukraine? On the TV screens are all and sundry. And cool tips give. And they talk about holding Donetsk, Lugansk, Kharkov. Field reports (literally and figuratively) are breathtaking. But everything is perceived as a football match. If the opponent takes possession of the ball, we worry. If we are possessed, we rejoice. And we are surprised at how well done Eastern Ukrainians are. With bare hands Tanks and the armored personnel carrier is stopped. The crews surrender. Flags outweigh. Nobody seems to want to fight the people. There is an easy and boring chatter about the referendum. On the federalization of Ukraine. On the redistribution of powers. Aw! Wake up. You live in the same house with a mentally abnormal type. Sleep behind one door. There is no lock on the door. And this type has an ax under the bed. And in a day (even every day) he says that soon he will poke someone on the head.

I do not know about you, but I, if the silenok is not enough, hands on legs and on the move. And if that's enough, I will take the ax and his tuknu. But we will never live with him in the same hut!

I hope there are no readers among those who are called tolerant people? Who do they want to cheat these referendums? Americans? They are not as stupid as they seem. Naive Donetsk guys think with a democratic vote to secure their freedom. It will not be her. Never.

Because now your people support these movements, just holding on to the idea of ​​help from Moscow. But she will come when you are halved (God forbid!). Well, Moscow can not do anything now. So you should do everything yourself. And decide on specific goals. And what to do? I do not want to be a teacher, but I will tell you.

You have a fifth column at your side. You know its participants in person and by last name. These are under the former government, under Yushchenko, under Kuchma, and so on. sat in warm places. They are your ideological antipodes. They will always be at the top with any authority. You know that does not sink? And their wives and children, and grandchildren - you are not companions, but enemies!

Further. Former employees of the SBU, police, prosecutors. These are famous blood-feeding world-eaters. They are just waiting for the right moment. Young people who tried to mow under the "Right Sector". Finally, the "Party of Regions". That they are now singing Lazarus, when torn from the trough. Wait. As soon as they are determined, they will quickly get rid of those who are in the Rada. Again, they want to bowl.

You calmly all enter and leave. Yes, in one night you can bring half a thousand people by bus, railway, cars. Weapons throw helicopters. And what will you do? With grenades throw? It is easier to cut the transport arteries with neighboring areas than to wander knee-deep in blood. Airfield - on the castle. Neither arrival nor departure. A piece of iron to disassemble, and three or four cars with coal downhill. Road dig up. Bridges - disassemble. Bottlenecks - under control with guys with RPG. Continue?

Border guards - to disarm, and beyond the territory. The border with Russia should be free to move. Both there and from there. All that flies from the West - shoot down! And then you will understand where you are going. Crush you.

Question. And where to get all this? So you have Akhmetov sitting. At your side. Ask for money from him. If you ask for good, it will give enough. The main thing is to ask where to the ground level will be two or three meters. And the bars on the windows - so as not to run away. The wallet should always be at hand.

You and Yulia Vladimirovna in Donetsk. Again, not a poor woman. And she was going to shoot you, Katsapov, with nuclear weapons. For idle talk and answer is not a sin.

And the referendum will be held "with a bang!" And separate yourself for health. And join.

Here is a letter. Not a letter, but the April Theses. I think that among you there are many stupid, but with military training. Read Lenin, as he recommended to take power. He's all black and white.

Ctrl Enter
Noticed oshЫbku Highlight text and press. Ctrl + Enter
We are
A great interview with Sergey Lavrov: about Ukraine, Obama and IranWhat you didn't want to know about England
Military Reviewin Yandex News
Military Reviewin Google News
31 comment
Information
Dear reader, to leave comments on the publication, you must sign in.