The agony of Kiev authorities. Reality or fiction? 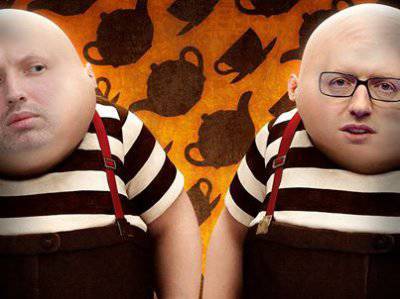 Everything that the media are reporting today on the conduct of the so-called anti-terrorist operation (ATO) in the south-east of Ukraine, causes mixed feelings.


If you do not take the political part, about which there is a sense to speak separately, then what is happening is very similar to agony.

I will begin with a complete failure of the idea of ​​raising funds for the restoration of the Ukrainian army. Collection points, invoices, SMS messages, mass calls for the need to protect the country. Everything went nowhere, as soon as it became clear from whom it was planned to defend. The result - collected about 100 million hryvnia. Lot? If divided, then each resident of Ukraine donated as much as two hryvnia. Seven rubles for our money.

Further. Who was supposed to carry out actions on the ATO?

Militia. Today, it can be said with confidence that most of the police in the Southeast are on the same side of the militants for federalization. For the separatists, if in Kiev.

Internal troops. In fact, they ceased to exist as a branch of troops. Full demoralization since the days of Maidan.

National Guard. Another failure. Planned set as much as 60 000 people. From among those same conscripts of the army and internal troops. It was only when it turned out that the monetary allowance was at the janitor’s level, and loyalty to the Kiev ideals was also required, then problems began with the willing. From among the Maidan self-defense forces, a whole battalion was recruited into 450 people.

Special Forces. Fighters of the Alpha group were among the first to declare their unwillingness to participate in the ATO. "Omega" seems to be listed among those who will take part in the ATO, but perhaps it is up to the moment that they, in fact, begin to participate.

Army. I will not say anything, he first read that the separatists seized several armored personnel carriers, and then saw, however, not armored personnel carriers, but very much BMD with Russian flags and people in the form of the Ukrainian army on them. With the army, too, everything is clear that no one, except, perhaps, immigrants from the West, is not torn to restore order in their native places by the Kiev measure.

What happens? The army, police, specialists do not want to shed the blood of their fellow citizens. But something needs to be done. Therefore, various organisms are assembled, of which new divisions of the National Guard, Dnipro and others are formed. It seems that loyal parts are being transferred from the West. Doesn't this remind you, dear readers?

History repeats. I have already voiced this in another material. Sounds familiar? Total mobilization, the transfer of units from west to east, lacking only the "Hitler Youth". But I think Tymoshenko is doing this.

Exactly 70 years ago, here, they also rushed from corner to corner, plugging holes with clerks, cooks and other specialists. But all ended with what? I remember. Collapse. And the liberation of Ukraine.

Why do all the efforts to curb eastern Ukraine so remind me of the deeds of bygone days? Is it because Yatsenyuk and Turchinov speak with such hope of billions from the USA and the EU, as one famous character spoke of a certain “miraculousweapons"?

I will not be greatly surprised if, after receiving the coveted billions from the West, these characters will immediately disappear from the scene. In any case, before the elections in May, they can not hold out.

One historical character said: "February always comes in February." This he said about the revolution. I would say on my own that May always comes in June. Even if through a series of bloody and hard days.

But I believe that May will come for Ukraine.

Ctrl Enter
Noticed oshЫbku Highlight text and press. Ctrl + Enter
We are
Donbass Chronicles 6. Winter at gunpoint and on 3 truce hryvniaSituational analysis of the death of the MH17 flight (Malaysian Boeing 777), made on the basis of engineering analysis from 15.08.2014
Military Reviewin Yandex News
Military Reviewin Google News
47 comments
Information
Dear reader, to leave comments on the publication, you must sign in.