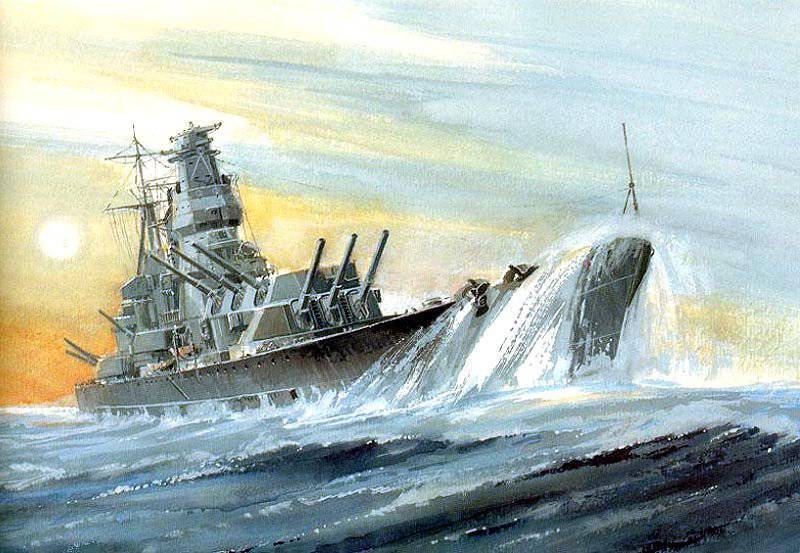 The design of heavy cruisers in the USSR began in the middle of the 1930-ies, simultaneously with the development of projects of large (type "A") and small (type "B") battleships. In 1934 – 1936 several pre-sketch and draft designs of ships with 240-mm and 280-mm guns of the main caliber were considered, but they did not receive further development.

The design of the heavy (in fact linear) cruiser, which was assigned the index “project 69”, was performed by the collective of CDB-17 (until January 1937 of the city - TsKBS-1). In the course of the work, it turned out that it was impossible to meet the specified displacement - it was necessary to exclude torpedo armament, lower the range of travel and reduce ammunition.

After the elements of Scharnhorst-type cruisers built in Germany became known to Soviet designers, the Defense Committee of the USSR SNK at the end of June 1938 decided to include in the range of tasks assigned to new heavy cruisers to fight these ships. July 10 approved the "Basic tactical and technical specifications for the design of heavy cruiser project 69". The main gauge increased to 305 mm, the standard displacement was limited to 31.000 T, the travel speed was 32 knots.

A new version of the draft project was submitted for review on October 20 1938. According to the conclusion of the Shipbuilding Department of the RKKF, it had a number of significant shortcomings, for which a special commission was created. The result of her work was the following recommendations: to replace 130-mm guns with 152-mm, to strengthen the booking and mine protection by reducing the cruising range and leave the speed unchanged.

Heavy cruiser project 69I. Side view

Heavy cruiser project 69I, view from the bow and from the stern

The layout of the heavy cruiser project 69I. Copy of the original drawing

In preparing the revised draft, the above remarks were taken into account, while reinforcing the booking of the conning tower, the main and anti-mine caliber towers. Slightly increased length, width and height of the side and, as a consequence, the displacement.

The revised draft project was reviewed by the State Defense Committee and approved by 13 on July 1939. The building orders were issued in March by 1939, the deadline was set in 1943. 12 on April 1940, five months after the bookmark, by the decision of the Defense Committee, the technical design of the ship was finally approved.

Due to the lag in the creation of main-caliber guns in 1940, it was decided to accept the offer of the German company Krupp to supply main-caliber towers with 380-mm artillery. At the talks that took place soon, the German side expressed its readiness to supply six sets of two-gun 380-mm towers (for two ships of the 69 project) and firing controls for them.

The political decision to acquire 380-mm towers and PUS in Germany was made without taking into account the opinion of the Navy. 10 July 1940 was approved by "TTZ for the re-equipment of the 69 project ship with German 380-mm towers instead of 305-mm MK-15 towers and main caliber CCP." October 16 of the same year, the project 69-I (and - foreign) was ready.

The placement of the new gunships required significant changes in the overall location of approximately 40% ship length. Mine protection was extended by 9 m. To accommodate new firing controls, it was necessary to increase the size of the conning tower, to change the upper tiers of the tower-like foremast, the superstructure under the stern command-range post. The set of fire control instruments included two KDP with one 10-m range-finder in each (installed at KDP-8 sites). All these changes led to the fact that the ship’s standard displacement increased from 35.250 to 36.240 tons, the speed decreased.

In October 1940, the deadline for the delivery of cruisers was shifted to 1944 year.

In November, 1940 signed a contract for the supply of 380-mm towers and control devices, but they were not sent to the USSR.

The construction of the head Kronstadt was suspended three months after the attack of fascist Germany on the USSR - 10 of September 1941 of the year - with the readiness of the entire 12%. During the war, the armor prepared for the ship was partially used for the construction of fortifications near Leningrad. At the end of the war, the completion of the ship for technical reasons was considered inexpedient, and it was dismantled for metal. By that time, the readiness of the cruiser was just 7%.

The second cruiser - "Sevastopol" - 15 August 1941 g. At readiness about 13% was captured by German troops. During the occupation, the Germans partially dismantled it for metal. After the liberation of Nikolaev by Soviet troops, the ship’s readiness was estimated at 4% (and the fascists undermined the slipway during the retreat) and refused to complete the construction.

The program for the construction of heavy cruisers like "Kronstadt"

The main 230-mm armor belt with a height of 5 m was mounted with an 6 ° inclination outward and covered the middle part of the hull for between the barbetts of the end towers (76,8% of the hull length at the waterline) and was closed by the beam: 330-mm bow and 260-mm aft.

The upper edge of the belt adjoins the 90-mm medium armored deck. Below was the 30-mm splinter deck, whose thickness outside the citadel was reduced to 15 mm.

Mine protection within the citadel had a depth of 6 m and belonged to the "American" type, it consisted of five longitudinal bulkheads and boules. Bulkhead thickness - from 14 to 20 mm.

The power plant included the 3 turbo-gear unit of the Kharkov Electromechanical and Turbo-Generator Plant (manufactured under license from the Swiss company Brown-Bovery) with a total power of 201.000 hp; steam was produced by 12 steam boilers 7 bis (pressure 37 atm, temperature 380 ° С). The possibility of a two-hour forcing of a power plant up to the power of 230.000 hp was foreseen. and achieve full speed 33 nodes. The power plant was located echelon in six boiler rooms and three engine rooms.

According to the project, the main caliber was to consist of three three-gun 305-mm tower installations MK-15, located in the diametral plane. 305-mm / 54 guns B-50 had an elevation angle 45 °, which ensured the firing range of 470-kg projectile 260 KBT.

The GK artillery fire control was carried out by two KDP-8 with two 8 range finders in each: on a tower-like foremast and on the aft superstructure. In addition, each tower had its own 12 range finder.

Mine caliber counted 8 152-mm guns in the four MK-17 two-gun turrets in the middle of the hull. Their fire was controlled by two KDP-4. To ensure the fire of anti-aircraft 100-mm units MZ-16, there were two stabilized pickups with 4-m range finders.

According to the book "The Second World War Battleships" - M .: Collection, Yauza, Eksmo, 2005,