The Kiev junta has no chance against the South-East. Arrangement of points over the "military operation" 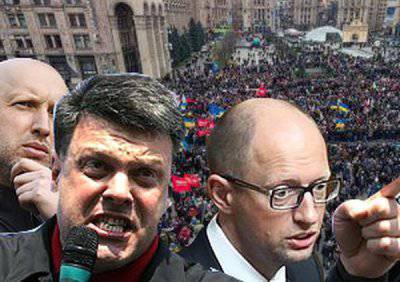 Western curators Kiev junta allowed to start a real civil war. No matter how much they deny it. The very fact of visits to Kiev by CIA Director John Brennan, and now also a whole US Vice President Joe Biden - speak not only about the importance of Ukraine in American strategic plans, but also about the controllability of the Kiev junta directly from Washington. And now the Kiev putschists are trying to find the strength and means to fulfill the orders of the owners. However, about this separately.


We note only one important point.

The United States and the Kiev junta do not stop accusing Russia of helping the insurgent Southeast. Meanwhile over Dnepropetrovsk, as this video shows,

the MK-1B Predator assault drone is circling and easily identified. This UAV was produced in the USA, was actively used in Iraq, Afghanistan and Pakistan for reconnaissance and strikes with AGM-114 Hellfire missiles at terrorists and aboriginal weddings. Delivered only to Turkey, Italy, the United Arab Emirates and Morocco. And it is very doubtful that such a device belongs to the armed forces of Ukraine or any private collector like Kolomoisky.

Now for the reasons why the US is pushing the putschists to suppress the uprising of the Southeast. Now the general situation on the territory of the former Ukraine, as well as around it, is such that the junta can no longer be inactive. The American special services, which organized the February coup, are now not going to let the situation go, but now they are continuing to work on the transformation of Ukraine into an anti-Russian springboard. Why they can not hesitate?

Yes, because events in the South-East of Ukraine threaten all current plans. In order not to lose the ability to control the processes occurring in Ukraine, Americans need to have the following conditions:

1. Ukraine must maintain the status of a state entity, a subject of international law. This is necessary so that the Kiev junta has the opportunity to act at the interstate level as a legally equal partner and can conclude any interstate agreements. Simply put, as long as Ukraine maintains the formal status of a state (a territory in which uniform laws and authorities operate) - Washington does not need to agree on its future fate with Russia or even Brussels. You can sign anything in a bilateral format with Turchinov and Yatsenyuk.

2. Ukraine should remain a unitary state. This is important for the USA. As soon as local governments receive independence and the ability to make decisions, laws of local significance, negotiate contributions to the federal budget in exchange for respecting their interests, the central government in Kiev will automatically become a platform for compromises. Then, without taking into account the views of the South-East, it will be impossible to carry out any political decisions affecting the fate of Ukraine as a whole. Thus, the transformation of Ukraine into a federation or, more likely, into a confederation will mean for Washington the loss of Ukraine and its economically expedient rapprochement with Russia. This the United States will not allow. They are more satisfied with bloody civil strife and chaos than confederation and peaceful coexistence of all parts of Ukrainian society. As a result, at the current stage - the United States is ready to support any form of totalitarianism and the dictatorship of the Kiev junta, even if it organizes a real slaughter in the South-East.

3. The legitimacy of the seizure of power by agents of American interests must be confirmed by elections. Even if the free will of the Ukrainian people will be declared frank farce. Therefore, it is so important for the United States to suppress the resistance of the South-East. They need at least the appearance of compliance with the election procedure throughout the territory. If the elections are not held or are held in the conditions of an obvious (noticeable even in the Western media) revolt of a significant part of the population, the legitimacy of the junta will remain unconfirmed.

All three points are interconnected and describe the current situation, fixing the February success of the Americans in taking Ukraine under direct control. This position of the United States would like to leave unchanged. However, it is almost impossible, since the coup in Kiev has launched a number of processes that cannot be frozen or reversed. Their development will inevitably lead to a change in the balance of power and the loss by the Americans of the levers of influence on the development of the situation.

However, in this case, the United States is completely satisfied with the complete disorganization of Ukraine and its transformation into the territory of chaos. And pushing the Kiev junta to actively suppress the uprising of the Southeast — the United States loses nothing for any outcome.

Now about the disposition of forces inside Ukraine. And why the junta in Kiev has no chance of crushing the uprising.

The resistance forces made the most important step for the success of their struggle - they took in hand weapon. Now, on the territory of Lugansk and Donetsk regions, the militia rooms of police departments take control of the rebels (with the transfer of personnel to the side of the people's self-government bodies). Weapons are captured during transportation between warehouses and redeployed units of the Armed Forces of Ukraine. The warehouses and places of permanent deployment are monitored by resistance forces or blocked by activists. Roadblocks and highways are also organized, which greatly complicates the maneuvering of forces that are formally still subject to the junta. Work is underway to attract units of the Armed Forces of Ukraine and law enforcement agencies to the side of the people.

We should also separately mention the city of Slavyansk, which has become one of the main lines of defense, as well as a place of provocation, which was supposed to unleash a lot of bloodshed. Slavyansk is the most important road and rail transport hub. It adjoins the key highway Kharkiv - Rostov, it starts from the highway to Donetsk and further to Mariupol. In operational terms, the control of transport routes in the Slavyansk and Kramatorsk areas will not allow retaliators to retaliate to Donetsk and Luhansk from the north-west. That is, Slavyansk and Kramatorsk cover Donetsk and Lugansk People's Republic. Since the organization of the resistance forces is occupied by former and current military personnel, as well as law enforcement officers - they just could not help but take care of the reliability of their defensive positions. To strengthen Slavyansk, the Lugansk Army of the Southeast yesterday, by the way, sent a detachment of volunteers.

Now the uprising can no longer be strangled by "pinpoint" strikes against individual captured buildings. And the original plan of the so-called "anti-terrorist operation" involved inflicting aviation bomb strikes on strongholds of the resistance forces (in particular, on the "Luhansk Fortress" - the building of the SBU), followed by a cleanup by foreign mercenaries. Now this "limited-scale" operation plan will simply not bring results - the self-defense forces are numerous and dispersed over many strong points over a significant area. To suppress an uprising of this scale, a full-fledged military operation is needed, it is necessary to attract significant forces.

And the junta has no such forces - attention - no.

As we have repeatedly written, the armed forces are more likely to be a potential danger to the junta than its power tools. There is no desire to shoot at one’s own people while performing a punitive operation on the servicemen and their commanders. But the transition to the side of the rebels (or at least disobeying orders) - is already observed with might and main. So, the provocation near Slavyansk was supposed to “motivate” the units of the 25-th brigade of the Airborne Forces of Ukraine to open fire on self-defense activists. And led to the opposite result - to the transition to the side of the people, which the paratroopers and sworn.

The local militia and internal troops are already (with a few exceptions) on the side of the rebels. Formal (but inactive) loyalty to the junta is maintained only by units of the Ministry of Internal Affairs and the Security Service of Ukraine, hastily transferred from the western regions. The degree of their loyalty is indicated by location separately from local units of the Ministry of Internal Affairs. Thus, the territory of the Donetsk Military Engineering School has been turned into a stronghold of groups of explosives and SBU, with which the junta tried to strengthen the local police. However, those locked in there are preparing not for an “anti-terrorist operation”, but for their own defense. They are waiting for the fate of the Crimean armed forces of the Armed Forces of Ukraine, betrayed by their own command. And most likely - they understand this perfectly.

The idea of ​​creating the so-called "national guard", which was supposed to become such "alternative internal troops", which would be staffed by nationalists and therefore be able to shoot at their own fellow citizens - which is already quite obviously failed. It was simply not possible to collect the necessary number of scumbags (including because part of the most radical Nazi groups boycotted the “Turchinov army”). And those who still managed to attract, were not only little combat-ready, but also poorly controlled. The junta has ceased to count on them as a capable power tool.

Now the junta, fulfilling the order of Washington, is trying to create a new structure. This time it will be called the "corps of the special forces of the Ministry of Internal Affairs", which is planned to be recruited locally again from radical Nazis (of whom else?), Cautiously called "civilian formations." “Patriotic volunteers” are promised to pay well — far better than soldiers. However, as a result, the forces that are loyal to the junta will finally turn into a variegated vinaigrette, which is poorly controlled and therefore incapable. And besides, not quite ready to fulfill any order.

All recent movements of the junta (including the transfer of heavy military equipment to the South-East) are more likely to be hysterical than effective. In fact, the junta is only capable of provocation. And, most likely, she will take care of them. Strengthened forces in the South-East - specially trained provocateurs - will provoke a discovery of fire on the rebels. The rebels will be provoked to open fire on those who were driven "to suppress". And this “antiterrorist operation” simply cannot lead to the success of the junta. Only to bloodshed, mutual bitterness and the beginning of a real civil war.

Ctrl Enter
Noticed oshЫbku Highlight text and press. Ctrl + Enter
We are
On the eve of the war - 2Battle without a win
Military Reviewin Yandex News
Military Reviewin Google News
140 comments
Information
Dear reader, to leave comments on the publication, you must sign in.