Andrei Vajra: "The end in the Southeast is near" 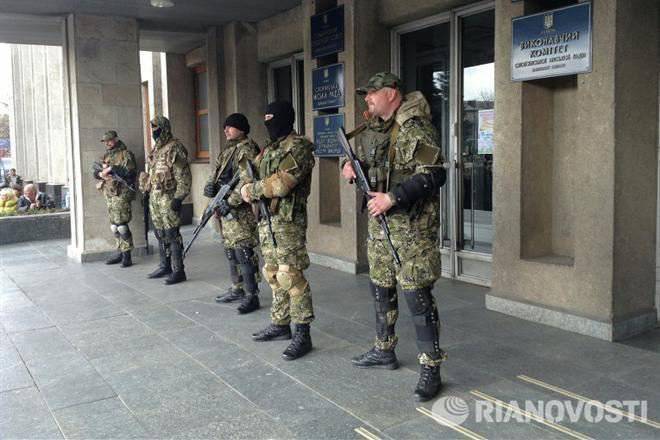 The federalization of Ukraine contradicts the ideology of Ukrainian nationalism that won in Kiev, therefore it is impossible

Andrei Vajra is one of the few Internet characters that is truly "iconic."

Let's start with the fact that 99,9% of readers of his most popular articles of the author himself have never seen. Rumor has it that this is a whole team writing under an assumed name (and it’s flattering to be credited to your humble servant).

However, the Vajra is a real person. But the "cult" gives him first of all not mysteriousness, but the coming true predictions of the development of the situation in Ukraine and no less accurate sociopsychological diagnoses for Ukrainian society as such.

On the current situation, Andrei Vajra told the Navigator.

Andrei Vajra: I am an ordinary person, I use public transport, I walk the streets and see that despondency and bitterness reign everywhere. Kiev is filled with gray and gloomy faces. It seems that people were crushed by some unbearable burden. The people grumble, with astonishing unanimity, scornfully speaking of the new "hetman". For almost everyone, the distinction between power and opposition, between right and left, between ideological nuances has been erased. For ordinary people, Ukrainian politicians have become monolithic "they." "WE AND THEY."

"Navigator": But in the Internet space, ideological battles between maydanschiki and antimaydanschiki, between supporting (albeit with reservations) the new government and their opponents are very hot. How influential is this segment of society? What is the reason for such a difference between “virtuals” and “reals”?

Andrei Vajra: The reason is motivation. “Virtuals” need ideology more, and “reals” need sausage. But in Ukraine, sausage has always won the ideology. "Reis" the vast majority, and they will go for those who give them this sausage. He will not promise, but will give real, here and now. Putin is doing it, so he is the greatest danger for our hetmanship, which can only take.

That is why the Ukrainian media are trying so hard to make fun of it. That is why Russia is served as a kind of Mordor, where Ukrainians are eaten alive.

Navigator: Ukraine is nearing presidential elections. What can be said about the campaign?

Andrei Vajra: Most people do not see who to vote for in the elections. They are going over politicians as they are exploring expired goods in a store, trying to find at least a “second freshness” among the tukhlyatiny. That is, with the fact that you still have to eat rotten, resigned.

On this psychological background, state patriotism begins to look like clinical idiocy. The pathos of patriotic frenzy totally covered the information space. Even beer advertising calls to fight for Ukraine.

Navigator: Media psychologists say that even in wealthy countries (as was the case, say, in the United States, on the eve of military incursions), such pumping is effective for no more than a couple of months. How long can she work with us?

Andrei Vajra: Even less. People have very strong psychological fatigue. Therefore, every day it is necessary to invent another “encroachment” of Russia, more and more implausible.

“Navigator”: You called the current government the “hetman”. This is the only historical an analogy that came to your mind?

Andrei Vajra: This is not an analogy, this is fate. Fate has walked for centuries in a vicious circle of “ruins,” “hetmanschins,” “cossacks,” and similar civil wars. History made a spiral spiral and returned to the starting point of movement, but, as usual, already in the form of a farce. Getman, as you know, never controlled the entire territory of Little Russia. Their power depended on external forces, and ordinary people hated them fiercely. Isn’t it the same now? These are not historical analogies: they are real hetmanism. Just like Ruin is absolutely real. And the people just asks for the Russian Tsar, as requested during the ruins.

"Navigator": Well, not all the people ... And what will be the next, further spiral of the conditional Left Bank (today's Southeast) and the Ruins (Center and West)?

Andrei Vajra: Unlike the Right Bank hetmans, the current Kiev authorities are afraid to realize that half of the state does not recognize their power. The so-called leaders of the Maidan do not even want to see the obvious fact that not only their Maidan, but also all of their good health, is disgusting to whole regions of Ukraine.

The new regime consoles itself with the illusion that if it, unlike Yanukovych, holds real "anti-terrorism measures," it will be able to force South-East to loyalty. But even if it succeeds with a little blood (which will not allow Russia to intervene), the people from the Left Bank will run to Russia, as during the Ruin fled from the Right Bank. And if, up until very recently, people fled from Ukraine individually (in terms of emigration, we are in first place in the world), now whole regions will dream of this.

"Navigator": The deterioration of the socio-economic situation may exacerbate the situation.

Andrei Vajra: And here already any lies of the “inappropriate” journalists about the “horrors of Raska” will not help. The people will be brought to such a state that it will not even be the best to crave, but at least hopes for the best!

... We, the people of Ukraine, are the biggest hypocrites. We do not want to recognize reality. Hence these propaganda hysteria in the media about the "united country". The Crimea has fallen off, Sloboda, Donbass and Novorossia are boiling, and joyful boys and girls in a zomboyaschik are pathetically convincing that Ukraine is one more than ever.

It’s like an old joke about Vovochka, to which the Komsomol propaganda brigade came to kindergarten and began to talk about how wonderful life is in the Soviet Union. Little Johnny listened, listened, and then he took it and bitterly burst into tears: “I want to go to the USSR!”.

Tricolor for residents of the South-East is not only a symbol of hope for a better life, but also a symbol of salvation in the case of "anti-terrorist operations." Although in the event of an imminent economic catastrophe, there is not enough “anti-terrorism” for all dissatisfied. After all, people will have nothing to lose ...

"Navigator": And if right now go to federalization?

Andrei Vajra: It seems to me that the possibility of federalization, Ukraine has already slipped. This is also because the “federalists” - all these Kolesnikovs, Dobkins, Efremovs - with whom it was possible to carry on a dialogue and reach an agreement, were strangled in the bud. As real politicians, of course. And instead of them came “separatists”, who do not need dialogue. For their ideas, they are ready to fight, in contrast to the above, and with weapons in hand.

Yes, federalization is unrealistic in the post-Maid period, because it contradicts the ideology of Ukrainian nationalism that has won in Kiev, which postulates, in defiance of reality, a united and conciliar Ukraine. It turns out that federalization is traded for civil war. Clever, you will not say anything.

Navigator: Do you speak of civil war as a reality?

Andrei Vajra: Southeast is in the initial phase of the uprising. As soon as the first blood is shed, there will be a massive outburst of hatred and violence. The people to this more than matured. We now see that he will have no problems with weapons. Even if the troops transferred to the Donbass start firing at civilians, these regular units are not much different from the militia in terms of armament (we can see how the unrepaired equipment has been continuously broken for decades) and in combat training.

If we assume that in the first days of the armed confrontation on the side of the rebels, the units of the Russian special forces that have passed through Chechnya will prove to be, the result of this confrontation is not difficult to guess. And hardly any of the adequate people doubts that if blood is shed in the South-East, the Russian army will not enter the conflict zone for peace enforcement.

According to my sources, our Ministry of Defense does not doubt it either. They believe that in the event of a direct military confrontation with the Armed Forces of the Russian Federation, the Ukrainian army will cease to exist within five days.

So the outcome is close.

Ctrl Enter
Noticed oshЫbku Highlight text and press. Ctrl + Enter
We are
A great interview with Sergey Lavrov: about Ukraine, Obama and IranWhat you didn't want to know about England
Military Reviewin Yandex News
Military Reviewin Google News
126 comments
Information
Dear reader, to leave comments on the publication, you must sign in.