April 17 2014
175
Two large German publications (Bild and Berliner Zeitung) decided to send a petition to the Bundestag demanding that the Russians be removed Tanks from the memorial to the fallen Soviet soldiers in Tiergarten. The memorial is located on Berlin Street on June 17 near the famous Brandenburg Gate. 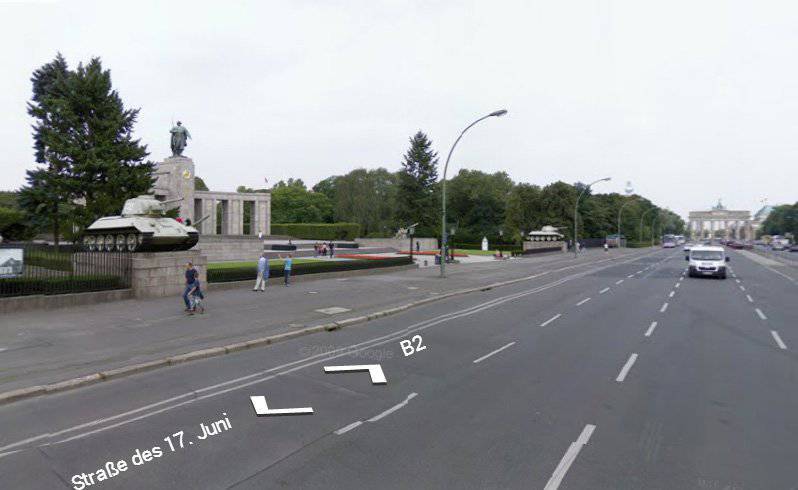 Edition "Bild":
Russian tanks are a symbol of the Cold War policy. Therefore, "Bild" and BZ ("Berliner Zeitung" - approx. "IN") sign a petition with the following requirement: we do not want Russian tanks and other military symbols on the Russian memorial at the Brandenburg Gate in Berlin.

The Bundestag must decide that the Russian tanks from the Tiergarten Memorial be dismantled. The reason is that Russian tanks today threaten a free, democratic Europe. We do not want to see Russian tanks at the Brandenburg Gate.

For the first time since the end of the Cold War, Russia has stepped over a peaceful revolution, having introduced its troops into the Crimea. Today, Russian military units are deployed on the border with Ukraine, threatening the freedom and sovereignty of the state.

We do not refuse the respect of the Russian people and do not deny their enormous suffering and sacrifices during the Second World War, but we believe that the memory of the Red Army soldiers who have been loyal to the earth should be preserved without underlining the militarism of the current leadership of the Kremlin, without reminding Putin’s tanks.

In general, there is a lot of text in the petition: from horror stories about Putin’s tanks threatening Europe, to the absurdities about a certain “peaceful revolution” through which Russia in Crimea allegedly stepped over. We, of course, understand that for some German editions of “only” 100 corpses and 1000 injured in Kiev for the sake of a “democratic” idea, this is quite a “peaceful” action (well, compared to the tens of millions of people killed and tortured in pursuance of the idea German leader during the Second World War), but, by and large, one such thought is already criminal, especially if it is expressed by such German publications respected in certain circles ...

The memorial complex itself, located in 300 meters from the Brandenburg Gate, was opened on the spot in the autumn of the mass grave of Soviet soldiers 1945 (according to some information, about 2,5 of thousands of soldiers and officers are buried here). On the opening day of the memorial in Berlin, a parade of Allied forces was held. In addition to the 2's Soviet T-34 tanks, which are mounted on pedestals on both sides of the memorial, there are two guns on it that took part in the battles for Berlin. In the center of the memorial is a sculpture of a Soviet soldier. Above the complex waving Russian tricolor.

Apparently, after the separate motorized units of the Ukrainian army began to side with the residents of the southeast, who were fighting for federalization, fixing Russian flags on the Ukrainian armored vehicles, progressive publications started hysterical: Berlin, the Russian tricolor, tanks, Putin, a-a- ahhhh !!!

Naturally, the calls of the two German publications to dismantle the memorial in Berlin caused a negative reaction. Moreover, critics of the petition "Bilda" and "Berliner Zeitunga" were awarded not only in Russia, but also in Germany itself. In particular, in response to a newspaper petition, the Berlin City Hall stated that the people who signed the dismantling appeal did not understand the meaning of the monuments at all. In the mayor's office, the “converts” were reminded that in the German capital today there are three large memorial complexes erected in memory of the dead Soviet soldiers. One of them is a complex in Tiergarten, the other two are in Pankov and Treptow Park. In total, in the ground beneath them lies the remains of 23 thousands of Soviet soldiers and officers.

All these monuments should be viewed not as an expression of a military threat, but as symbols of victory over national socialism. On the memorial in the Tiergarten, tanks of the Soviet, rather than the Russian, army were actually installed, and the Soviet army was long gone.
In addition, the cold water tub on those who came up with the idea of ​​dismantling the memorial, and poured the readers of the publication "Bild". In their comments, the majority of readers expressed their bewilderment as to why the editorial board today began to see the traces of “Putin militarism” and, moreover, here in general the memory of Soviet soldiers who liberated Europe from fascism.

Here are a few comments in which readers evaluate the petition of German newspapers (comments on the website "Bild").

Jack ripper
The T34 is a great tank of its time. And a monument worthy of him. That's why my answer is NO! The tank should remain in place!

E.Zander
This petition is ridiculous.

Jochen bohnert
And I do not want a spying American embassy at the Brandenburg Gate !!!

Ben benn
How about a more timely petition: we don’t want an American atomic weapons in German boden. I consider this petition to be much more important than voting against old tanks.

M h:
And the French do not want to ask: do they want to see the German guns in Verdun? Russian troops have long been withdrawn from Germany, and the US is still here ... And nobody writes petitions about this.

Bocks Horn:
For the Jewish victims of Nazism, memorials were erected. And this is a memorial in memory of 20 to millions of people who did everything to strike at Nazism. The memorial symbolizes the liberation struggle and the sacrifice of the Russian people. Hey, politically motivated! Germany begins to deny its history? ..

M.Muller:
What is this panicking? And who bombed Serbia? Who bombed Libya? Who brought grief and death to Iraq?

And there are hundreds of similar comments!

Honestly - I want to firmly shake hands with these Bild readers. Perhaps today ordinary Germans are much more sober in assessing the situation than the central authorities and the German press. Worthy of respect!

True, the central authorities of the Federal Republic of Germany decided not to shut off the mind - the Bundestag reported that no decisions would be taken to dismantle the Tiergarten memorial.

Ctrl Enter
Noticed oshЫbku Highlight text and press. Ctrl + Enter
We are
Memory is immortal. Memorial to the fallen soldiers of the Red Army opened in Amvrosiyivka and the remains of soldiers reburiedDonbass Liberation Day-2. Festive meeting at the memorial rock
Military Reviewin Yandex News
Military Reviewin Google News
175 comments
Information
Dear reader, to leave comments on the publication, you must sign in.