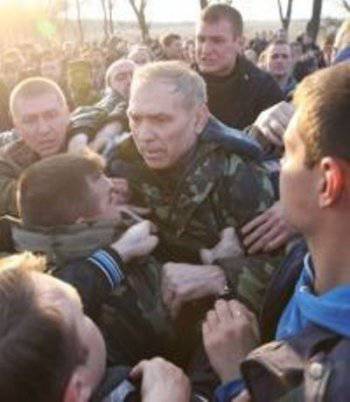 In the course of the "antiterrorist operation using the army", sanctioned by the. altogether, Alexander Turchinov, it turned out that there were an unimaginable number of “terrorists” who had undergone special training at secret bases of the GRU of the General Staff of the Russian Federation. Virtually the entire population of Kramatorsk is a continuous Taliban. This demoralizes the so-called "Ukrainian military", sent to suppress the "rebellion of the separatists." The “anti-terrorist blitzkrieg” announced by SBU head Valentin Nalyvaychenko failed. This is the first, most important conclusion from the rather contradictory information received during the day.


In the morning, April 16, armored vehicles entered Kramatorsk. As a result, six (!) Airborne combat vehicles (BMD) were captured by unarmed (!) City residents. Yesterday, April 15, there was a strange battle for the Kramatorsk airfield, captured, according to official sources, by “separatist fighters”. Strange for the simple reason that no one needed this airport, as a matter of fact, of FIG. Army units sent by alarmists from Kiev, have already arrived at the place of the intended operation. No one is waiting for the landing of the special forces troops from Russia either. Yes, if anything, and the airfield is not needed for this. But hysterical hype in the media. A video appeared on social networks about an army helicopter shot down from an RPG. Then it turned out that the actions took place in Syria, and not in Kramatorsk. Information about dozens of dead and wounded, the shooting of a roadblock by a fighter, a shootout in the city center constantly appeared. Toward evening, the “commander-in-chief” Turchinov announced the seizure of the most important, well-fortified object of the “separatists” - the same airfield. Then appeared news on the re-storming of the airfield using small arms. Yulia Tymoshenko also made her contribution to the general atmosphere of hysteria, announcing the creation of either Belorushashchik detachments or national special forces of resistance. The point is that each patriot will be given a kit of form, automatic, toilet paper and sent to the eastern front. At night, the social networks went crazy with an incredible amount of fakes, corpses and calls to kill everyone.

Therefore, the second conclusion that can be made: there was a massive population misinformation. Most likely, the provisional Kiev authorities had to urgently once again imitate decisive actions to suppress the uprising in the southeast. Therefore, they chose an airfield and with the help of helicopters, paratroopers, snipers and for some reason fighters captured it. It is reliably known that no one died (thank God), but three insurgents received gunshot wounds. The heroic seizure of the airfield and became the reason for the report on the "outstanding victory over the separatists."

The third conclusion: the army units sent by the provisional Kiev authorities faced a peaceful, but bitch, extremely aggressive-minded population. Everyone probably watched a video in Yu-Tube with the so-called head of the Anti-Terrorist Center of the SBU Vasily Krutov. He, I must give him his due, went out to talk to the people who blocked the military unit where the special forces were stationed. He was mostly asked the same questions: “What ... did you come here? !! Where are you ... Kiev, you see terrorists ?! ”With difficulty he managed to escape from the angry crowd and hide behind the gates of the unit. Facebook has even reported that he was captured and taken away in an unknown direction. Then they began to write about the fact that Krutov was beaten. In fact, he was just sent. And the crowd broke into the gate of the part. There were shots in the air. But this is not one that is characteristic, not embarrassed. People did not disperse. Some threw stones over the fence, jumped to better see where they were. Even European media admit that civilians have rebelled against the army. At Euronews, I have a favorite host, Sergio Cantone. He is in Ukraine since the beginning of the “euromaidan”. We must pay tribute to him: a person, in contrast to the utterly ochershihschy mass media of Ukraine, tries to be objective. In Crimea, he said that the people for joining Russia. Today, April 16, he showed people who came to the Kramatorsk airfield. Nobody drove them there, the militants did not hide behind their backs. The men approached the soldiers who were looking at them and asked one question. We have already quoted it. Sergio summed up that civilians oppose the army operation. It is one thing to fight the terrorists, and quite another to the local population, which is ready to "tear Bandera with its bare hands." It's true.

Even a day has not passed since the beginning of the "anti-terrorist operation", and in Donetsk the rebels seized the city council building. Two Ukrainian servicemen were stopped on the road, broke into them and taken away in an unknown direction. One of them turned out to be an officer of the SBU. Hoopoe in a helmet, who calls himself a "military expert," said the army was blocking Slavyansk to "prevent GRU special forces from escaping from the city." Idiots ... In other words, the concept of ATO has changed dramatically. Now they are not clearing, but blocking, so that Russian saboteurs come out to them in the evening and say: “Oh, you blocked us so terribly, so we decided to give up.” I repeat once again: the "anti-terrorist operation" in the southeast does not make any sense, since the people, the civilian population, which are called "terrorists" and "separatists" rebelled. The interim government perfectly understands this and therefore is trying to provoke a civil war by distributing trunks to "Svidomo patriots." Well, there isn’t enough "patriotism" for the special forces and the military to crush the caterpillars tanks young boys and girls who fearlessly surround tanks and armored personnel carriers, because it is their city, because they do not believe that they can die because of Kiev executioners who give criminal orders.

Ctrl Enter
Noticed oshЫbku Highlight text and press. Ctrl + Enter
We are
What you didn't want to know about England
Military Reviewin Yandex News
Military Reviewin Google News
53 comments
Information
Dear reader, to leave comments on the publication, you must sign in.