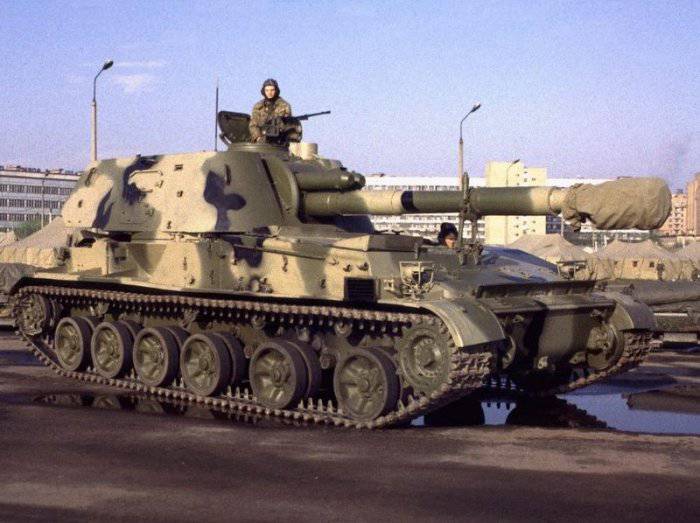 In 1947-1953, the design of the first domestic self-propelled howitzers began. But in the mid-50s, N.S. Khrushchev fell under the influence of atomic scientists and rocket launchers and, with his power, stopped working on the development of heavy tanks and artillery. He sent the released funds to the development of missile weapons. It should be noted that the situation in the USA was similar, but there they had previously realized their mistake. The results of such a policy were disastrous. In the constantly emerging local wars, the indispensability of self-propelled artillery was revealed. Moreover, in many situations, artillery became the only real force when the use of aviation and tactical missiles were impossible. There are dozens of examples of such conflicts: the 50s - an artillery duel in the Strait of Formosa between the PRC and the Americans and Kuomintang who settled on the islands; 60s - battles for Damansky Island between the USSR and China; 70s - the "first socialist war" between Vietnam and China; in 1967-1972 - an artillery duel through the Suez Canal of Egypt with Israel, finally, in the 90s - the war in Bosnia and Chechnya. Everywhere artillery, including self-propelled, confirmed that it was, is and will be the god of war. Work on self-propelled guns resumed only after the departure of N. Khrushchev from the post of General Secretary of the CPSU Central Committee. The decree of the Council of Ministers of July 4, 1967 was truly historical for the development of domestic artillery. According to him, full-scale work on the self-propelled guns "Acacia", "Carnation", "Violet" and the 240-mm self-propelled mortar "Tulip" began.

The beginning of work on the SS “Acacia” was preceded by a comparative analysis of artillery shells created during the war (SU-100, SU-152) and post-war generation artillery systems. As a result, the concept of the perspective development of self-propelled artillery was chosen.

The design and manufacture of the first prototypes of the 152-mm artillery unit of the 2-3 self-propelled howitzer “Acacia” took place in Sverdlovsk, in the OKB-9 plant. M.I. Kalinina, and the chassis - at the Uraltransmash plant. The artillery part of the SAU was developed on the basis of the X-NUMX-mm towed howitzer gun D-152. The internal structure of the barrel, ballistics and ammunition were taken from the D-20 unchanged. The new howitzer received the factory D-20 index and the GRAU index (Main Missile-Artillery Directorate) - 22А2. The chassis was developed on the basis of the Krug Launcher of the Circle, which in turn was created on the basis of the experimental CAU SU-33P, and received the 100 Object index. 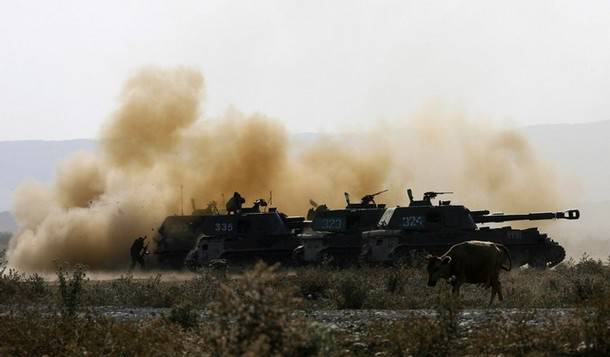 The first two prototypes of the 2C3 were manufactured at the end of the 1968 of the year. During the factory tests, which ended in October 1969 of the year, a large gas concentration of the fighting compartment was detected, especially when firing with small charges. For the same reason, four more samples, released in summer 1969 of the year for field tests, were not accepted either. In the end, the problem of gas pollution was handled, and in 1971, the SAU 2C3 “Acacia” was put into service. Serial production of self-propelled guns launched in 1970 year at the parent company, UZTM. The first three cars were assembled at the end of the year. In 1971, nine more were manufactured, six of them in the month of December. In 1973, the plant received an order already at 70 SAU.

The hull and turret are welded from sheets of rolled armored steel, which provide protection against an armor-piercing bullet from a distance of 300 m, as well as from fragments of artillery shells and mines of small caliber. 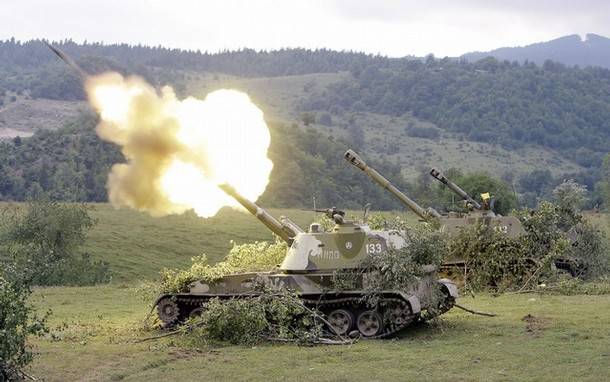 The main armament of the “Acacia” is the X-NUMX-mm howitzer D-152. Its barrel consists of a monoblock pipe, a two-chamber muzzle brake, an ejector, a coupling and a breech, a vertical wedge gate with a semi-automatic mechanical (copier) type, a hydraulic brake of a spindle recoil, and a pneumatic nakatnik. The recoil cylinders are rigidly connected to the barrel and, when fired, roll back with it. The normal rollback length is 22-510 mm, and the limit is 710 mm. Hovering howitzers in a vertical plane is in the range from -740 ° to + 4 °. The manual lifting mechanism of the howitzer is equipped with one sector and the balancing pneumatic mechanism of the pushing type. The howitzer is installed in the embrasure of the tower with the help of embedded pins.

The loading of the howitzer is separate-sleeve, that is, a projectile is first sent to the barrel bore, and then a sleeve with a propelling charge, like the vast majority of artillery systems of such power and caliber. Ammunition consists of 40 shots, which are in two ammo packs (in the tower and in the case).

In the 1975 year, instead of two mechanized ammunition, one was introduced — drum type on 12 shots, which made it possible to increase the ammunition load from 40 to 46 shots. The self-propelled gun thus upgraded received the index 2С3М, and the howitzer - 2А33М. The “Acacia” ammunition includes old high-explosive fragmentation projectiles OF-540 (43,56 kg projectile weight, explosive - 5,86 kg) and new high-explosive fragmentation projectiles (25 kg and 43,56 kg respectively). For firing, they provide full charges, as well as six reduced. The latter, with a small firing range, allow to send a projectile along a steeper trajectory and hit targets hidden by obstacles (hills, multi-storey buildings, etc.). In addition, as the angle of the projectile encounters a horizontal target (the roof of the pillbox, the house, the tank, etc.) approaches the normal, the effectiveness of the projectile sharply increases. And finally, the smaller the charge, the greater the survivability of the howitzer barrel. By changing the charge, you can change the initial speed of the high-explosive fragmentation projectile from 6,88 m / s to 651 m / s and the range, respectively, from 282 17 m to 053 m. The maximum firing range of the high-explosive projectile is 6751 18 m, when firing it is active -reactive projectile, it is increased to 500 24 m. 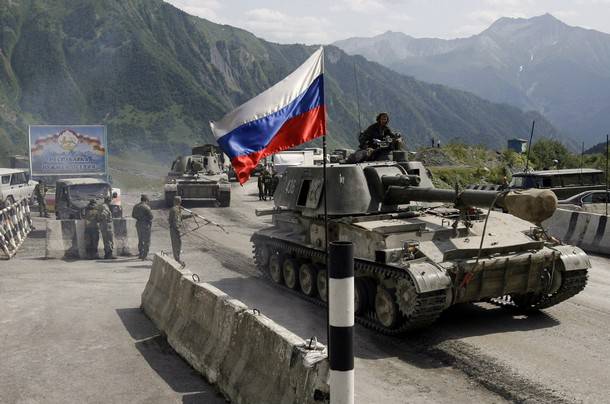 To combat the tanks, the 2C3 ammunition includes a cumulative projectile BP-540, the armor penetration of which does not depend on the firing range. They are fired by a special charge 6 5,6 kg mass, the initial velocity of the projectile 676 m / s, sighting range 3 000 m. Normally, it pierces the armor thickness 250 mm, at an angle 60 ° - 220 mm, at an angle 30 ° - 120 mm. The regular 2C3М ammunition usually includes 42 high-explosive fragmentation projectile RP-540 and RP-25 and four cumulative BP-540. In addition, the self-propelled gun can shoot both non-standard-sized projectile Br-540B (dull-headed with a ballistic tip) and projectile Br-540 (sharp-headed). At a distance of 1000 m, Br-540B penetrates normal 120-mm armor, and at an angle 60 ° - 100-mm; B-540 - 115-mm and 95-mm armor, respectively. In 1970, for the ACC Akacia, the development of a special anti-tank gun missile with a range of 17 400 was launched. Self-propelled howitzer Acacia can also fire other projectiles: the lighting parachute C1, which illuminates the area for 40 seconds; chemical 3X3, all 152-mm projectiles (with 540 index) from MP-20 and D-20 howitzers, 152-mm projectiles corrected by Krasnopol (RP-38), and projectiles (with 530 index) 152-mm-1 shells, as well as projectiles (with 70) 2-mm-2 shells, as well as projectiles (with XNUMX) XNUMX-mm-XNUMX shells, and projectiles (with XNUMX) XNUMX-mm-XNUMX shells, and also XNUMX-mm XNUMX-mm projectiles (with XNUMX indexes) XNUMX-mm-XNUMX shells (X-NUMX), and XNUMX-XNUMX howitzer . In addition, in the XNUMX-ies, a shot with a XNUMX KT nuclear weapon was introduced into the XNUMXSZ ammunition.

The 12-cylinder four-stroke liquid-cooled diesel engine B-59 is installed on the machine as a power plant. The engine develops power 382 kW, which allows self-propelled howitzers to move on roads with a hard surface with a maximum speed of 60 km / h. The engine interacts with a double-flow manual transmission. The gearbox is in the same block with the planetary rotation mechanism. The suspension is individual, torsion, with telescopic hydraulic shock absorbers. The chassis, in relation to one side, consists of six double rubberized rollers (the intervals between the first and second, second and third rollers are different and much larger than between the other rollers), four supporting rollers, a front driving wheel and a rear-wheel guide wheel . The caterpillar's width with a rubber-metal joint is 490 mm. “Acacia” has a relatively small specific pressure on the ground, not exceeding 0,059 MPa, which corresponds to the pressure on the ground of an adult's foot. The ACS can overcome rises and descents with a steepness up to 30 °, ditches up to 3 m wide and vertical walls up to 0,7 m high, as well as water barriers up to 1 m deep. The allowable roll for the machine is no more than 25 °.

The self-propelled howitzer 2C3 is equipped with a filtering unit, an automatic fire protection system that turns on when the temperature in the combat or power compartment rises, and a system for sealing habitable compartments to protect the crew from damaging chemical, bacteriological and nuclear factors. weapons. In the latter case, it is triggered automatically when gamma-ray fluxes occur during a nuclear explosion. If necessary, the tightness of the “Acacia” is maintained both on the march and when firing with ammunition located inside the vehicle.

In 1987, the “Akatsiyu” was equipped with command information receiving equipment and a new sight, and this modification of the self-propelled howitzer was designated 2СЗМXNNXX.

The self-propelled howitzer 2C3 is airborne, and the An-22 can transport two units at once. The Acacia ACS has proven itself quite well in the course of the hostilities in Afghanistan, Chechnya, as well as in other armed conflicts that took place on the territory of the former USSR.

Production of self-propelled gun 2С3 “Acacia” was discontinued in 1993 year. Currently, the machines of this type are in service with the ground forces of Russia, Hungary, Iraq, Libya and Syria.

Source: Encyclopedia of armored vehicles: Tracked combat vehicles
According to the materials of the site of OJSC "Motovilikha plants"