"Here we saw that they were not separatists or terrorists, but ordinary locals, with whom we will not fight" 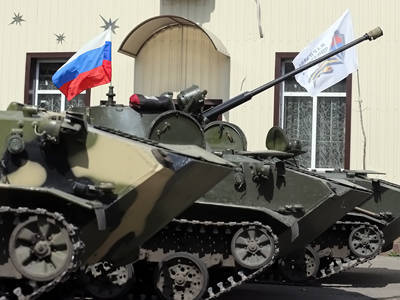 The Ukrainian military, who raised Russian flags over their BTRs in the morning of April 16 and went over to the militia in Slavyansk and Kramatorsk, Donetsk region, told why they did it.


“We decided not to fight with the people and not to defend such power,” the crew said.

Earlier it was reported that today the Ukrainian armored personnel carriers arrived at the center of Slavyansk, controlled by the people's militia, got up near the district council and removed the flags of Ukraine. Weapon they have already transferred to the militia, reports RIA News.

As the correspondent of Radio RSN reports from the scene, the military, who went over to the residents of Slavyansk, were in the 25 airborne brigade. Six infantry fighting vehicles and a truck entered the city. In the hands of the soldiers, St. George ribbons are tied; they have no other identification marks on the uniform. The local population welcomed the arrivals with shouts: "Well done!" According to the correspondent, residents applauded the military for more than 15 minutes.

In Kramatorsk, crews of several armored personnel carriers, infantry fighting vehicles and tanks previously also announced that they sided with the militias. The corresponding video on YouTube was published by eyewitnesses:

On the side of the protesters went about 60 Ukrainian soldiers from the crews of BMD and BMP, sent to Kramatorsk to participate in an army operation.

The servicemen removed the Ukrainian flags and drove their cars to Slavyansk, RIA Novosti reports. “Here we saw that they were not separatists and not terrorists, but ordinary locals, with whom we will not fight,” one of the military told the agency.

In total, the crews of six BMDs, several infantry fighting vehicles and one armored personnel carrier have already moved to the side of the militias. Many raised Russian flags and flags of the Airborne Forces. Several cars are now standing near the city council of Slavyansk, controlled by supporters of federalization.

Meanwhile, the new Kiev authorities are trying to convince the Ukrainian and world community that the Russian flags on the Ukrainian armored personnel carriers in Kramatorsk and Slavyansk "were a military cunning." As the "Interfax" referring to the words. heads of the Batkivshchyna faction Sergei Sobolev; they did this in order to penetrate the units controlled by supporters of federalization.

“It’s our armed units that used the partisan method of penetration. This event will be known very soon - literally within an hour or three, and you will understand that this, in fact, was a breakthrough that was provided by our units”, - said Sobolev at a briefing 16 April.

According to him, this information is official, which was provided by the acting. Minister of Defense of Ukraine.

Earlier, a deputy from the UDAR faction, Sergei Kunitsyn, said that the Ukrainian Ministry of Defense did not confirm the information spread in a number of media outlets about the appearance of an armored personnel carrier with Russian flags in Kramatorsk and Slavyansk, Donetsk Region.

Also, according to him, the head of the defense department did not confirm reports of the transition of the Ukrainian military to the opposite side.

Ctrl Enter
Noticed oshЫbku Highlight text and press. Ctrl + Enter
We are
Reports from the militia of New Russia for 27-28 September 2014 of the yearPunitive operation in Slavyansk
Military Reviewin Yandex News
Military Reviewin Google News
201 comment
Information
Dear reader, to leave comments on the publication, you must sign in.