BTR-4 for the National Guard of Ukraine

April 17 2014
31
At the end of March, new information appeared on the future of the Ukrainian armored personnel carrier BTR-4. According to the Ukrainian media, armored vehicles built as part of one of the most ambitious and controversial projects of recent times have found their new owners. In the foreseeable future, several BTR-4 armored personnel carriers will be transferred to the newly created National Guard of Ukraine. 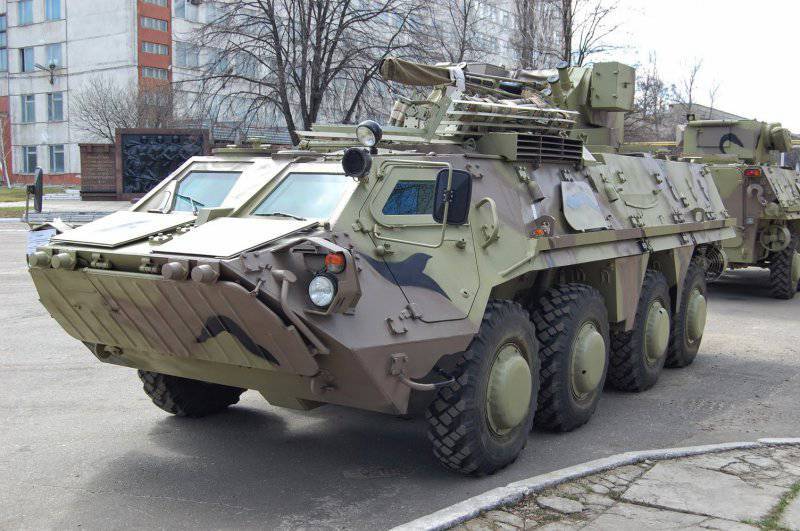 From the words of Y. Tereshchenko it follows that the equipment for the new divisions has already been built and is now waiting for it to be handed over to the operators. For example, the Kiev Armored Plant is ready to hand over to the National Guard five new vehicles BTR-3 and five BTR-80, which will soon have to be repaired at the expense of Ukroboronservis. Zhytomyr armored plant can transfer to the customer five repaired BTR-80. At the Nikolaevsky armored plant there is one modernized BTR-70Дi ready for transfer. Thus, parts of the National Guard in the very near future can get 16 relatively old (including modernized) armored personnel carriers.

Apparently, these are machines from the third and fourth lots of equipment intended for delivery to Iraq. 42 armored vehicles BTR-4 of the third installment last year became the main characters of the extremely unpleasant stories, and the remaining 16 should have gone to the customer after them. However, the Iraqi Ministry of Defense expressed complaints about the quality of the supplied armored vehicles and canceled the contract. It was originally planned to deliver several modifications to the BNR-420 armored personnel carriers XRUMX in Iraq. In fact, from March 4 to February 2011, the Iraqi Defense Ministry accepted only 2013 machines. Less than a hundred Ukrainian-made combat vehicles reached the army units.

Iraq refused further supplies of Ukrainian equipment due to its poor quality. The main claim was the presence of cracks in the armored corps of the supplied armored personnel carriers. The third batch of BTR-4 for Iraq, sent last spring, was not accepted by the customer precisely because of cracks in the armor plates. In the early spring of 2013, the 42 armored personnel carrier of several modifications in one of the Ukrainian ports were loaded aboard the ship SE Pacifica and set off for Iraq. In addition, the ship was carrying 70 thousand tons of metal to India. The epic with the transfer of this technology to the customer stretched for several months.

At the end of April, a 2013 vessel carrying 42 armored personnel carriers for Iraq and 70 thousands of tons of metal for an Indian customer arrived at one of the Iraqi ports. By this time, the Iraqi Ministry of Defense decided not to unload and take Ukrainian BTR-4 because of their poor quality. It took time to resolve the issues that had arisen, due to which the crew of the SE Pacifica was forced to leave the Persian Gulf and anchor in anticipation of the results of negotiations between Baghdad and Kiev.

For several months, Ukraine and Iraq could not find a common language, which is why a new “actor” appeared in this dubious story - the company-owner of White Whale Shipping. Instead of delivering new cargoes, the SE Pacifica was idle in the Persian Gulf, and the company suffered losses. The shipowner warned the organization Ukrspetsexport, which is responsible for the supply of military equipment to foreign customers, about possible sanctions. In particular, it was alleged that the ship could be sent to the port of a third country, where the armored personnel carriers would unload and then initiate legal proceedings. As a result of the trial, the equipment will be sold, and the proceeds will be compensation for a simple vessel.

After waiting a few months, the ship SE Pacifica went to India to deliver a large cargo of metal to the customer. The result of a vessel’s idle in the Persian Gulf was the failure of the delivery of metal - this cargo arrived to the customer about three months after the agreed date. Indian merchants initiated the arrest of the vessel and demanded a fine in the amount of 500 thousand dollars.

At the end of September, Indian authorities removed the arrest from SE Pacifica and again headed for Iraq. Almost half a year of negotiations led to nothing, Iraq still refused to accept armored vehicles with cracks. Only in January, 2014, the ship with armored personnel carriers again came to the Ukrainian port, after which the defective vehicles were returned to the manufacturer.

A few months after the return of the "Iraqi" armored personnel carriers BTR-4 to the manufacturer, their fate was determined. The technique, which Iraq refused, will be used by the newly created National Guard of Ukraine. It should be noted that the situation when a foreign customer refuses any military equipment, which is later transferred to the armed forces of the manufacturing country, is quite rare, although it does not constitute something extraordinary. Nevertheless, the supply of equipment rejected by Iraq to the Ukrainian National Guard is of great interest.

The Iraqi military last year was not satisfied with the poor quality of the equipment supplied, namely the cracks in the armor plates of the vehicles. In addition, 10 armored personnel carriers spent months on board a cargo vessel, and therefore require appropriate maintenance. Maintenance and minor repairs can be performed relatively quickly and simply, which cannot be said about getting rid of cracks in the hulls. Most likely, the units of the National Guard will receive armored personnel carriers, whose armor sheets still have cracks, only covered with “cosmetic” methods. It is not difficult to guess what the combat potential of such equipment will be.

Despite the fact that the use of defective equipment is a dubious undertaking, "Iraqi" BTR-4 will be able to significantly increase the combat capability of the newly created units of the National Guard. This structure so far has only automotive technology, so the supply of armored personnel carriers can have a beneficial effect on its capabilities. You should not forget the specifics of the operation of defective equipment, including in combat conditions.

According to experts, even defective armored personnel carriers may be suitable for the tasks assigned to the National Guard. For example, the publication “Vzglyad” cites the words of the director of the World Trade Analysis Center weapons I. Korotchenko, who believes that the BTR-4 with cracks is quite suitable for use in planned operations. In the current conditions, the National Guard fighters will have to deal not with a well-trained army with modern weapons and military equipment, but with the militia armed with small arms from the departments of the Ministry of Internal Affairs or the Security Service of Ukraine. For such punitive operations will be useful and machines with cracked armor.

According to Ukrainian media reports, at the end of last year, the Nikolaev Armored Plant began shipping ordered armor for the National Guard. As far as is known, it was at this enterprise that until recently there were 42 armored personnel carriers, originally intended for Iraq. Deadlines for the delivery of the promised 100 armored personnel carriers have not yet been named. Such a transfer of equipment can take as several weeks or even days (when transferring armored vehicles from the armed forces) or take months. Finally, it should not be ruled out that all deliveries in the end will be limited to only 74 by the available machines or will not even reach such volumes.

The transfer of light armored vehicles to the National Guard of Ukraine has already started. Over the next few weeks, units of this structure should receive more than 70 armored vehicles, and in the future the number of armored personnel carriers should increase to hundreds. Where and how the transmitted machines will be used is not completely clear. Nevertheless, the features of the current stage of the Ukrainian crisis are cause for concern. So far, no one can rule out that the BTR-70Дi, BTR-80, BTR-3 and BTR-4 will be used against "separatists", as well as the civilian population of South-Eastern Ukraine. Moreover, there is reason to believe that units equipped with armored personnel carriers will perform precisely such punitive tasks.