Free fall of the Ukrainian industry 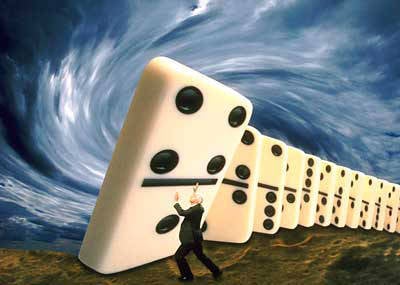 With the game unfolding, Kiev’s invisible muscles in the south-east of Ukraine should not lose sight of the changes in the Ukrainian industrial segment. Every year, the metallurgical, chemical and food industries brought treasury Square huge profits and, in fact, determined the future direction of economic development. “Brought” and “defined” - these verbs are not for nothing used in the past tense, as today's political confusion and increasing economic confrontation with Russia leads to obvious negative consequences for the Ukrainian industrial segment - to its decline.


From the moment of the coup d'état on the territory of Ukraine, the industry, which even before this could not be called developing as a cosmic pace, began to experience enormous problems. And these problems are based not only on economic turmoil.

In particular, over the past month, Zaporizhstal alone has been attacked by militants from the Right Sector twice. For the first time, the seizure of property of one of the largest industrial enterprises of Ukraine took place on 20's last month. A new attack with attempts to seize the dumps of Zaporizhstal took place the other day. The information that the property of the enterprise, which employs more than 19,5 thousands of people, was attempted to re-take possession of the armed people from the Right Sector, was announced by the chief prosecutor of Zaporizhzhya, Alexander Shatsky. He stated that armed people had been delivered to the Zaporizhstal dumps by buses, who tried to take part of the dumps under their own control. Pravoseki decided to again seize the ownership of the enterprise after clashes between supporters and opponents of Maidan occurred on the Walk of Fame of Zaporozhye. Apparently, it was necessary to throw out the energy and "ask" for funds to continue the "triumphal victories of the revolution." At the same time, representatives of the Zaporizhia branch of the “Right Sector” stated that they had taken part of Zaporizhstal’s property under their control in order to protect them from being plundered ... In addition, Zaporizhzhya pravoseki said that in this way they tried to prevent the work of not Zaporizhstal itself, but several firms that allegedly continue to make profits in the Zaporizhia region for the “family” of Yanukovich.

Our organization really stopped the work of firms working for the family of Yanukovich, quotes the representatives of the "PS" edition "Navigator".

As a result, as reported, Alexander Shatsky, the Zaporizhzhya authorities contacted Dmitry Yarosh, after which the PS representatives left the Zaporizhstal dumps. What words to the presidential candidate the Cossacks operated on - not reported ...

For reference: the dumps of Zaporizhstal were once used to “store” wastes with a high percentage of metals. Some of them are actively used today. Ukrainian media report that it is often for these territories that real wars are unfolding between the various factions that are trying to “stake out” the right to recycle and then sell the metal found in Zaporozhstal dumps. That is why the statements that the “Right Sector” was going to protect the dumps from someone are more like an attempt to justify the actual redistribution of property.

For obvious reasons, the raids of armed individuals on industrial facilities today do not add to the economic prosperity. A whole series of small industrial enterprises today are forced to face frank exactions from those who consider themselves to be "defenders of the revolution." Representatives of the same “Right Sector”, as stated in the famous film, simply make an offer that cannot be refused - with weapons in the hands of enter the territory of companies and offer the leadership of the "hire" "self-defense Maidan" for protection. Guard from whom? Very simply - from the very "Right Sector", from the very "self-defense". If the management of the enterprises refuses, it is unlikely that this company will be able to conduct its business in the former calm mode. Therefore, today, at many industrial and commercial sites of Ukraine, one can see a characteristic sign “object under protection” with the signature “Self-defense of Maidan”.

But not only the encroachments of violators of the law today hinder the active development of Ukrainian enterprises. Another reason that many industrial facilities either freeze their production process or close at all is the economic instability of Ukraine itself. More than ever, a silhouette of default looms over the Ukrainian economic system. The insolvency of the economy today is obvious, and this in the absence of financial injections will lead to a default rating. If for the US dollar today they give about 13 hryvnia, then after confirming the default, the hryvnia may collapse, at least, to 25 units per dollar. It is this value of the hryvnia that economic experts mention today - in the event that the situation in Ukraine does not stabilize in the near future (and the prerequisites for stabilization are not yet visible).

The economic crisis and political intrigues in Ukraine led to the fact that several companies, owned and co-owned by Dmitry Firtash, would be stopped by the beginning of May. We are talking about enterprises for the production of chemical products (fertilizers). According to the Ukrainian media, Dmitry Firtash decided to “temporarily” stop such enterprises as Stirol, Severodonetsk and Cherkassy Azot, and Rivneazot. Officially, the stop is connected with the repair of enterprises, but unofficially - precisely with the economic and political events in Ukraine, plus the uncertainty of the future fate of Dmitry Firtash himself.

It is worth recalling that Firtash 12 in March of this year was arrested in Austria at the request of the FBI. It turned out that since 2006, he was accused of corruption crimes (bribes to Indian officials to obtain permission to develop titanium in one of the states of India) and to create a criminal group. After 10 days after the detention, the Ukrainian businessman was released on 125 with millions of euros. If you believe the data Forbes, it is almost 20% of the current state of Dmitry Firtash. The United States declares that they have all the evidence against the Ukrainian businessman, and they demand that the businessman be extradited to his territory. What is the connection between Indian titanium, Firtash bribes and the United States? In the United States, they say that Firtash used American financial platforms for remittances, and conducted negotiations with Indian officials in American cellular networks. It turned out that this is more than enough for the United States to demand extradition ... Guided by this logic, it turns out that if the Kiev pickpocket Vasya had phoned a colleague Raj from Mumbai using, for example, the Russian Yotafon "Simka", then Russia should demand Vasina extradition, perhaps? .. Could the US come up with a more plausible excuse to get a Ukrainian oligarch and his "savings".

Why does the USA Firtash? And then, that the United States is trying to get to its assets, recalling that the businessman at one time was closely associated with Viktor Yanukovych. And in order not to talk about this explicitly, the United States is composing tales about his interest in the fight against “international corruption”, adding to this the “use of American cellular operators.” But for the factories of Firtash and the economy of Ukraine as a whole, and this is no longer important.

The decline in production in Ukraine in the first quarter of 2014 of the year (according to the State Statistics Service of Ukraine) in relation to the indicators of the same period last year averaged 9%. In some industries, the decline looks terrifying. For example, the production of vehicles, trailers, semi-trailers fell by more than 24%.

Production of optical and high-precision products - and at all on 58%! The fall in the volume of metallurgical production was 10,1%. The only industry where a significant increase was recorded compared to the first quarter of 2013 was the electrical equipment industry, with Ukraine itself as the main sales market, and Russia and Belarus (this is about the overwhelming desire of Maidan to go to Europe with its goods) ...

Ctrl Enter
Noticed oshЫbku Highlight text and press. Ctrl + Enter
We are
The fall of the Syrian airbase Abu ad-Duhor. The longest siege of the civil war is overFree Papua: how the Papuans are trying to save their world and win independence
Military Reviewin Yandex News
Military Reviewin Google News
31 comment
Information
Dear reader, to leave comments on the publication, you must sign in.