GRANITE on the verge of new discoveries 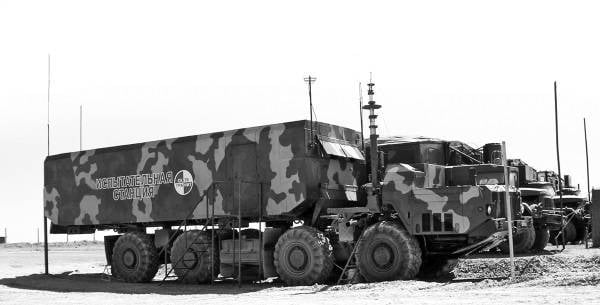 Tests and practical operation of the upgraded P-18 radar showed that in Kazakhstan local scientists from the special design and technology bureau Granit created the first domestic radar with improved tactical and technical characteristics and a prolonged operational resource. For all upgraded radar P-18M the company provides technical support for the entire period of operation. What this achievement of domestic scientists gives to the Armed Forces and combat readiness in general, Talgat ADAMOV, General Director of SKTB Granit LLP, exclusively told the "Megapolis" correspondent.

- In the troops of the Air Defense Forces for conducting radar reconnaissance, flight support aviation, airspace controls were used and are still being used radars of the 70-80s of the release, which are so morally and physically outdated that they cannot provide an adequate level of combat readiness taking into account modern requirements. Stand-by radars of the 5N84, P-18 type, engaged in scheduled duty, operate for at least 3 hours during the year, and the remaining radars, air defense systems and anti-aircraft missile systems - at least 500 hours. But the service life of the electrovacuum devices of the radar, PRV, SAM systems is only 1 to 200 hours. In this regard, the need for electrovacuum devices per locator is up to 500 sets per year. Each such lamp costs millions of tenge. In addition, most of the elements of spare property for the electronic equipment of the air defense forces have long been discontinued. Therefore, in order to get out of this situation in 1000, the Ministry of Defense assigned SKTB Granit tasks to modernize stand-by radars of the 4N2000 and P-5-meter wavelength range, to produce a 84-coordinate centimeter-wave combat-mode radar and to master the modernization and production of anti-aircraft missile systems. We successfully cope with the tasks. After all, not many states in the world have their own radar technologies. Not more than two dozen. And we have become one of these states.

According to Talgat Adamov, in 2007, the company successfully upgraded the first two sets of P-18 radar stations with the transfer of radio equipment to a new element base.

“The experience accumulated by the company in conducting R & D and repair of RTV facilities allowed 2007-2013 to upgrade the X-NUMX radar of the П-27М radar based on the radio-electronic equipment sets developed and manufactured by SKTB Granit LLP,” the general director continues. - As a result of the upgrade it was achieved: an increase in the detection range by 18%; replacing the element base with a solid-state one; the time between failures is increased many times; power units replaced; simplicity of operation is provided with automation of diagnostics of equipment operability up to the standard replacement element; reduced costs for training combat calculations in connection with the installation of training and simulation equipment and documentation systems. But the most important thing: I would like to emphasize that, in connection with the modernization, the operational resource of radars was extended by 10 years. This is a significant budget savings.

- Talgat Nesipbaevich, what has your enterprise developed and has recently been specifically created to ensure the combat readiness of military equipment of the air defense forces?

Talgat Adamov
- Automated system for collecting, processing and displaying information about the state of the air situation "Berkut". Rocket-target complex "Saker" with rocket targets "Saker". A mobile command post for the Training Center for Combat Use of the Air Defense Forces of the Armed Forces of the Republic of Kazakhstan at the Sary-Shagan test site. From 1997 to the present, technologies have been mastered and reconstructive repairs of the 5Ж15С division of the C-300PS system and other air defense systems were carried out at the production base of the enterprise. In addition, we annually conduct technical support (field service of locations, as well as repair of units and cells at the production base of the enterprise) of divisions and the command post of the C-300PS system, and the P-18М radar sets.

- As far as I know, SKTB Granit LLP had other important tasks.

- Yes, we were instructed to work out the issue of joint production of 3-coordinate radar of the centimeter wave band with leading European companies such as THALES (France), INDRA (Spain), IAI (Israel). Leading experts of these companies have repeatedly visited our company in order to assess the capabilities of our production base and determine the potential of the company. As a result of visits, all companies confirmed readiness to jointly produce 3-coordinate radar of the centimeter wave band. After agreement with the Ministry of Defense, SKTB Granit LLP and Thales company (France) in July 2012 created a Granit-Thales Electronics joint venture in Kazakhstan, and in September an agreement on technology transfer from Thales company was signed Granit-Thales Electronics.

In addition, the enterprise, at its own expense, and in the shortest possible time mastered the modernization of the radio station P-161, organizing new jobs for highly qualified specialists. Last year, the first two sets of radio stations P-161 were upgraded, which were transferred to the Head Office of Communications of the Armed Forces of the Republic of Kazakhstan. From this year we are ready for the serial implementation of the modernization of the P-161.

- What are the prospects and plans for the future?

- Organization of mass production in Kazakhstan of the NUR radar; development, production of a prototype of secondary and passive locators. This year we plan to transfer their prototypes to the air defense forces for study, testing and decision-making. For the needs of the Border Guard Service of the National Security Committee of the Republic of Kazakhstan, we are currently developing a technology for the modernization of 1 radar 133 radars. We are mastering the technology of modernizing anti-aircraft missile systems and are working on issues of organizing the production of advanced anti-aircraft missile systems. Enough work and plans for the hulk.

- Once, SKTB Granit LLP was a part of Kazakhstan Engineering NC JSC. A couple of years ago you separated from them. Why?

- Tired of unnecessary bureaucratic problems. Now, as required by the Supreme Commander, we are more engaged in the real business, production and less shifting pieces of paper from one table to another. And the results of the team immediately appeared tangible. Granite. We - the production workers and the words to the wind are not accustomed to throw. The basis of our team are highly qualified specialists, most of whom have experience in the enterprise 15 and more than years. The company has a closed production cycle, which allows the development and production of products from printed circuit boards to finished products without the involvement of related organizations. Considering the many years of experience in setting up and repairing radio engineering equipment of SVO, in developing hardware systems and systems, as well as highly qualified specialists, SKTB Granit LLP is one of the leading enterprises in Kazakhstan providing the Defense Ministry’s needs in the field of air defense and radar, as well as development and production of technical means of information protection. We are also proud that our company has become the winner of the VI Republican Competition of Achievements in the Field of Invention "Shapagat-2009" in the nomination "Inventor of the Year."

"Granit" has existed in Kazakhstan since 1976. By the decree of the Council of Ministers of the USSR, the enterprise was founded to ensure the creation of the country's anti-missile defense systems as the Alma-Ata production and technical enterprise of the Granit concern of the USSR Ministry of Radio Industry. In the period from 1976 to 1992, the Granit APTP as the head of the installation organization provided installation, configuration, docking, state testing and maintenance for test and missile defense systems and missile attack warning systems at the Sary-Shagan test site, participated in the configuration and commissioning of the Moscow missile defense system. In the same period, the company participated in state tests and subsequent upgrades of the C-300PT, PS and PM air defense systems, and also conducted work at the Baikonur cosmodrome on installation, configuration and testing of the Buran spacecraft landing system. In 1993, the Granit APTA was transformed into Granit SKTB with the tasks to develop and pilot production of instruments and systems in the field of radio electronics, telecommunications, communications and information technologies within the framework of republican targeted scientific and technical programs.

Ctrl Enter
Noticed oshЫbku Highlight text and press. Ctrl + Enter
We are
List of destroyed the largest and most high-tech enterprisesMilitary reform as an integral part of the security concept of the Russian Federation: Systematic dynamic assessment
Military Reviewin Yandex News
Military Reviewin Google News
Add a comment
Information
Dear reader, to leave comments on the publication, you must sign in.