Madrid will not stop Barcelona

April 18 2014
20
9 April The Spanish parliament banned the Autonomous Region of Catalonia from holding a referendum on independence, scheduled for November 9. The declared plebiscite was supported by several dozens of deputies, but this did not play any role: the majority of people's elected representatives opposed it. Spanish Prime Minister Mariano Rajoy once again said that he does not represent Catalonia outside Spain. Earlier, the Constitutional Court also opposed the referendum. 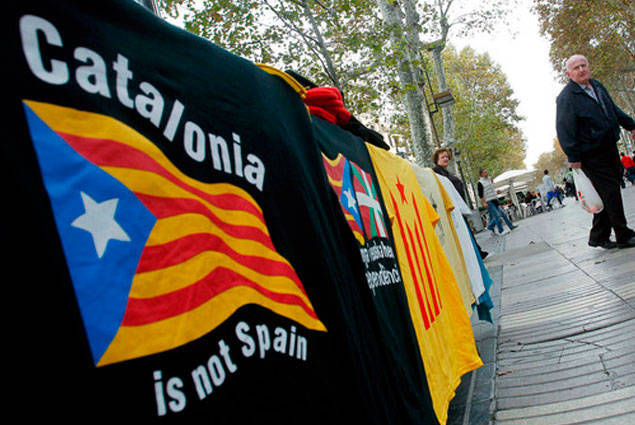 However, the Catalans will not stop it. The head of the regional government, Arthur Mas, has already announced that Catalonia will continue to seek permission to hold a referendum.

“We have already understood that it depends only on ourselves whether we will resolve this issue,” said the representative of the regional government Francesc Homs.

15 April in the media appeared next horror stories from the EU to Catalonia. The representative of the European Commission, Alejandro de Asans and Muñoz, said: “The European Union was built on the basis of agreements applicable to member states, and if part of a member state ceases to belong to it and becomes independent, the contract no longer applies to this territory.” The new independent state becomes a “third state” in relation to the EU.

The authorities in Madrid, of course, do not want this referendum and appeal to the Constitution. In September 2013, Madrid refused to Barcelona to hold a referendum aimed at self-determination. The January vote did not help the Catalans either. The position of Madrid and the Constitutional Court of the country has not changed, despite the right of peoples to self-determination as stipulated in the UN Charter. Apparently, only the so-called “Kosovo people” have such a right.

Note that Catalonia accounts for about a fifth (19%) of Spain’s GDP. According to other data (probably overestimated), this number has exceeded one fifth of GDP. At the same time 7,2 million people live in Catalonia, i.e. 16% of the population of Spain. Both local authorities and the local population believe that Madrid receives too much tax revenue from autonomy.

Official Madrid cannot allow Catalan self-determination. Such a vote, the results of which are easy to predict by the decision of regional deputies, will simply ruin Spain (by the way, going through an economic crisis) into pieces.

Spain is seriously reeling from the Basque Country. In January, the one hundred thousandth march of ETA (Basque Country and Freedom) took place in Bilbao. The protesters demanded a mitigation of the prison regime for their activists who were languishing in the damp dungeons. More than two years ago, ETA stopped the deadly tactics of explosions and murders of officials and policemen, which lasted four decades (ETA was created in 1959-1962). An organization that seeks separation of the Basque Country from Spain and the creation of the state of Euskadi is responsible for the death of more than eight hundred people, not to mention material damage. Radical Basque separatists demand secession from Spain.

Against the background of such double separatism, the government of M. Rahoy is also concerned with the processes of fermentation in other EU countries. For example, in Britain.

Madrid scares the Scots who want to secede from Britain, the imposition of a veto in the European Union. Scotland will have to re-join the EU, but it will not work: Spain will veto it. He does not want Raha to give his Catalans and Basques a Scottish example!

Rahoy is a consistent friend. He does not recognize not only the possible independence of Catalonia, the Basque Country or the said Scotland. In his opinion, neither Kosovo, nor Abkhazia, nor the Crimea, nor Palestine are independent today. Meanwhile, the Catalans write on the walls of buildings: “Catalonia is not Spain!” Actually, it really is not Spaniards.

Catalonia is a little like Spain. Here they do not like bullfighting, they do not speak Spanish, and signs are written in Catalan. In short, the Catalans managed to preserve their national identity.

Residents of the autonomy have made many concessions from the Spanish government. They even have their own domain name on the Internet - this is not the case, for example, at Gagauzia, whose sites are controlled from Chisinau, which issues the domain names .md. Catalonia has become one of the few autonomies in the world that have received their own Internet domain - .cat, which has been in operation since September 2005. However, the domain is, of course, a trifle. The decisive factor for the Catalans is the economic viability of their region, which they believe will continue even when their homeland becomes a separate country.

But there is one "but." The most "notorious" separatists want to keep the membership of the new independent Catalonia in the European Union. But the EU explained that to save - will not work. Alejandro de Asansa and Munoz, whom we quoted above, only reminded about this.

Separatists from Barcelona like the economic situation in which the region is today. That is, autonomy relatively flourishes when Spain participates in the EU. Nationalists understand that without the EU, the current model can easily be broken. In this case, an independent Catalonia will be in crisis. And the crisis is protracted. Everyone knows how long Brussels can pull a cat by the tail in negotiations on the association, and then on joining, and what painful reforms it imposes. Bulgaria dictates the angle of curvature of cucumbers ... On the other hand, separate Catalonia from Spain, Madrid will generally veto its entry into the European Union. That is, Catalonia will remain, so to speak, overboard. And its economy will decline, many experts agree on this.

But Arthur Masa does not stop it. It does not even stop the comparison of Catalonia with the Crimea.

In late March, the head of the Catalan government gave an interview to the TV channel "Euronews"where he stated that comparing Catalonia and Crimea is “madness”.

The correspondent of "Euronews" asked: "Let's take the situation in the Crimea. Relations between Ukraine and Russia are very, very unfriendly. What do you think about the statement by the Minister of Foreign Affairs of Spain, who compared what is happening in the Crimea and what is being done in Catalonia? And what do you think about the fact that Russian television cites Catalonia as an example when commenting on the referendum held in Crimea? ”The following answer was received:

“Such comparisons are part of the political scenario, since Russia today uses all the pretexts to justify what happened in Crimea. Looking for similarities in everything ...

I was much more impressed by the statement of the Spanish minister. In my opinion, to compare Catalonia and the Crimea is madness. The situations are completely different. In Crimea, there was no local government formed on the basis of the election, which could convene a referendum. And in Catalonia there is such a government! In Crimea, the voting was organized from the outside, lowered, so to speak. In Catalonia, no one pressed anyone, the decision is taken in an atmosphere of complete transparency and in compliance with democratic principles. A regional government was formed by election results; it is mandated to organize referendums. So the regions can not be compared at all!

At the same time, Arthur Mas explained the difference between the governments of Great Britain and Spain.

“Apparently, in the UK, democratic principles are much more respected than in Spain. It saddens me, because on the part of Spanish society, the commitment to democracy is no weaker than in the UK. Spain is a democratic state, there can be no doubt. But in Britain, democracy is deeper than ours. It seems to me that when Cameron realized that the Scottish Parliament, a lawfully elected authority, demanded a referendum, he obeyed his will. He never tried to deny that the Scots - is a nation.

In Spain, it is customary to deny this to the Catalans. This is the first in a series of big mistakes ... Refusing to recognize the people of Catalans is to distort history».

Regarding the "exclusion" of independent Catalonia from the EU, Mr. Mas said that "there were no precedents," and the Lisbon Treaty does not envisage such a situation. According to Mas, European politicians will take into account the fact that Catalonia has always disbursed funds to Brussels.

Thus, the issue of inclusion of Catalonia in the EU can be resolved through economic means. Here Mas is absolutely right. Become Catalonia "separatist", the EU will consider it not as an enemy and a separatist, but as a supporter of European integration (and those, of course, are necessary for Brussels). This is the first. Second: Catalonia is a relatively rich region that can become one of those states that contain Brussels. However, there is a third: the European Commissioners immediately begin to milk the rich countries. The Germans are very unhappy that their country contains “loafers” from Greece or Spain. Are the Catalans ready to help the Greeks, Cypriots, Italians or Portuguese fraternally? And most importantly, are they ready for the EU to require them to help Spaniards?