Gagauz will solve the issue "peacefully and calmly" 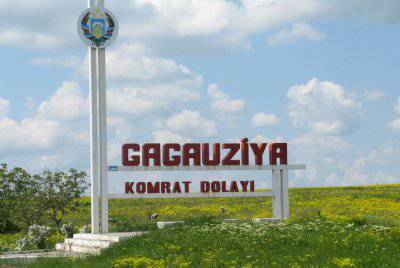 Recently, Gagauzia declared its readiness to secede from Moldova and in case of anything, ask to go to Russia. This can happen if the pro-Western Moldovan authorities continue to join the EU. Earlier, a referendum was held in Gagauzia, the overwhelming majority of whose participants voted for “deferred status” (allowing the people to exercise the right to external self-determination in the event of a change in the status of the Republic of Moldova as an independent state) and for the Customs Union.

The voter turnout was significant (more than 70%). 68023 voters voted for the adoption of the draft autonomous law “On the deferred status of the people of Gagauzia for external self-determination”, but only 1324 voted against. 68182 voters voted for Moldova’s accession to the Customs Union, but only 1057 voted against. An 66643 person voted against Moldova joining the European Union, and only 1718 voted in favor. It turns out that an insignificant minority of voters is ready to take the European path.

Here is what a correspondent recently in autonomy writes about Gagauzians KM.ru Igor Starkov:

“Russian language and Russian culture are relatives for them, so when the Gagauz ask:“ Well, how are you with us? ”, There is nothing to answer. How? As at home, everything is dear, as on the Middle Volga. The handkerchiefs on the grandmothers are colored, the Horde ones, the men are in adidas, the women are feminine, and the girls are beautiful. Everything is as it should be. Ordinary Russian people, who after being defeated in the Cold War on the territory of another state, are nothing special.

Although the Gagauz people have one feature that distinguishes them from the Russian people living in Russia - an incredible self-organization, more characteristic of the Turks or Caucasians. All decisions concerning the life of the people are made by male communities and respected people, and only God is in authority. The authorities perform technical functions, executive, and all decide male circles.

Perhaps that is why, when Moldova adopted a Euro-oriented law in support of homosexuality, the Gagauz sent Moldovans with this law to the very place that is considered sacred in modern Europe, and canceled its operation on the territory of autonomy. ”

On April 15, the first meeting of the joint commission of the Moldovan Parliament and the Gagauz People's Assembly was held in Chisinau. Member of the Commission from the Gagauz side, NSG deputy Ivan Burgudji told the correspondent Kommersant-MD Sergey Manastyrly on the requirements of autonomy in negotiations with the center.

Gagauz want to earn the law "On the special legal status of the Gagauz autonomy (Gagauz Yeri)", adopted by the parliament as early as 1994 year. The government within a few months can bring into line with all laws and regulations. Neither laws nor government decrees should contradict the norms of the mentioned law on the status of Gagauzia. The Gagauzians would like to resolve the legislative issue “peacefully and calmly” and agree to “wait.” However, if the process starts to be “tightened”, then it will be “about the failure of the Moldovan authorities to implement the law they adopted as early as 1994”.

Ivan Burgudzhi specifies: “... You see, some representatives of the center in the joint commission do not understand that the law“ On the Special Legal Status of Gagauz Autonomy ”is primarily political, and then legal. They say that some provisions of the law are not in the Constitution. But the Constitution was written after the adoption of the law. Back in 1994, the Moldovan authorities ordered all regulations to be adopted in accordance with our law. It means that they should have written the Constitution for it, but they did not do that. Already then we were thrown! ”

At the same time, the Transnistrian scenario (“civilized divorce” with Chisinau) Burgudji rejects: “... I think it is better to have a confederation in a single economic space than a civilized divorce.” A different internal scenario is possible, once run-through in Russia: “... in the event that it is not possible to come to an understanding and results in the work of the commission, we consider this scenario: Gagauzia will refuse to participate in the parliamentary elections. ... There are such examples in world practice, for example, in stories Russian Federation. Once Tatarstan refused to participate in parliamentary elections. As a result, the central government of the Russian Federation had to make concessions. If Chisinau does not give Comrat a quota of five mandates in the parliament of the Republic of Moldova, we will not participate in the parliamentary elections. This means that the legislature will be illegitimate for us ... "

As 28 was told in March by the media, Rospotrebnadzor lifted a ban on deliveries of the Kazayak Vin wines from Gagauzia to Russia. The ban acted on 10 September 2013 of the year due to quality problems, but did not apply to alcohol products from Transnistria. Now Gagauzia in the face of “Kazayak Vin” also joined Transnistria.

In late March, the Gagauz delegation visited Moscow. This was reported by the Gagauz website. gagauzinfo.md.

On the outcome of the Gagauz visit to Moscow, Dmitry Konstantinov, Chairman of the Gagauz People's Assembly, spoke at a press conference in Comrat. According to him, the consulate of the Russian Federation and the Rospotrebnadzor laboratory will open in Comrat. It is planned to create a brand "Gagauz wines." In addition, people in need of autonomy will receive discounts on gas up to 35 and even up to 50%. Finally, residents of the autonomy working in Russia will be able to get passports of Russian citizens in a simplified mode. A representative office of Gagauzia will open in Russia. Konstantinov said: “Our brothers from the Russian Federation promised us that those people who are already in Russia today will be able to obtain citizenship without the need to travel to Moldova. In a matter of days, the representative office of Gagauzia will be opened there, telephones will be posted, and the issue will be resolved. ”

It is assumed that large Russian business will come to Gagauzia. He will lay new vineyards here and create enterprises. For this he will be given a five-year "tax holiday".

This is not all. The Gagauz government signed a protocol of intent on cooperation in the field of education and health with the government of the Moscow region. The contract will be signed in the coming days. Approximately 300-350 graduates will be able to receive free education in Russian universities and as many will be able to enroll in colleges.

The authorities of the Moscow Region intend to fully equip all three district hospitals of Gagauzia with equipment for examining patients, as well as transfer the autonomy of 10 ambulances.

According to the deputies of the National Assembly, Ivan Topal and Sergey Chimpoesh, these actions of Russia are a response to the results of the February referendum.

Ivan Topal said: “Our people have been associated with the Russian Federation for centuries, even the Russian tsar has provided us with these lands. Naturally, all our people are eternally grateful to Russia. Everything that Dmitry Konstantinov said, I am deeply convinced, will be fulfilled, moreover in the near future. ” “Whatever difficult times we have, we are not changing our commitment to Russia. In Moscow, they want to build the right relationship for the future. I am convinced that soon people will feel this response to the results of the referendum, ”comrade Cimpoish noted.

Thus, while the West and its ilk are preaching a clean policy in the spirit of the Cold War, the Gagauz are an example of a constructive economic approach that also contains the real spiritual element - the friendship of peoples. The same element that, like cement mortar, holds the bricks of the universe together. America, and indeed the West, would never understand such an approach. The West can only destroy and enmity. That is his political lot on the world stage. But the Gagauz film is not willing to watch the movie where Washington and Brussels play leading roles.

Observed and commented on Oleg Chuvakin
- especially for topwar.ru
Ctrl Enter
Noticed oshЫbku Highlight text and press. Ctrl + Enter
We are
Moldovan independence: 24 of political uncertaintyChain of referendums in Moldova: separatism or the outcome of the anti-people policy of the state authorities?
Military Reviewin Yandex News
Military Reviewin Google News
43 comments
Information
Dear reader, to leave comments on the publication, you must sign in.