"Berkut" spreads its wings over Ukraine 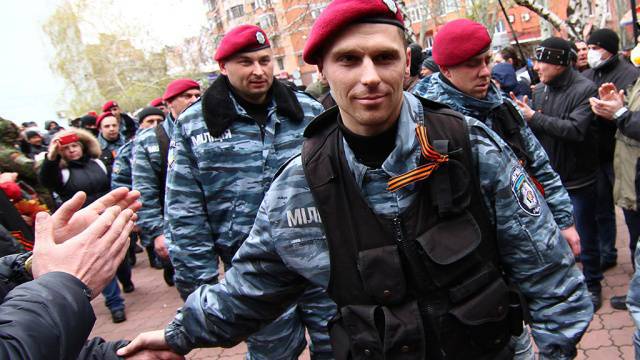 It was amusing to see the story from the UN Security Council meeting on Ukraine, in which the head of NATO, Anders Rasmussen, was keen on Sergei Lavrov, almost looked into his eyes. But he had just accused Russia of provoking unrest in the Donbass ...

How to explain it? How to explain all these Rasmussenas, with “NATO never thought of attacking Russia,” Farionov with “these creatures deserve only one thing — death,” Tymoshenko’s with “shooting nuclear weapons”,“ Chocolate hares - tender bastards ”, peaceful demonstrators from“ we are peaceful, but who will say a word against them will kill them to death ”, Turchinov with“ Russian minorities ”, all this euromaidan with the motto:“ Who does not skip is that Moskal ”?

There is an explanation, they said it themselves maydanutye: "onizhedeti"! Everything, from the neo-fascist militants Yarosh to Rasmussen and Catherine Ashton with Nuland! According to their childishly naive justifications, and cruelty. “They do not call themselves fascists, it means they are not fascists!” Therefore, when they meet with adults, like Lavrov and Putin, they look into their eyes, like naughty shpana.

After all, Rasmussen knows about himself that his NATO-European Union is the same cat that ate Russian lard — Ukraine. And now she’s wagging her tail: I didn’t want it, she herself came! And playing wonder: and why did the South-East of Ukraine rise up?

There are many reasons for the Donbas uprising, but there is one main thing: this is the feat of the "Golden Eagle", its blood spilled on euromaidan. The heroic confrontation of the “Berkut” to the Bandera “Right Sector” revealed a terrible truth: euromaidan was extras for the Bandera Nazis, he was deceitful and only dressed up in “Ukrainian clothes” - he is not really Ukrainian, but brown-Galician.

"Golden Eagle" on the streets of Kiev opened another terrible truth, saying: "Moscow is behind us!" He personally showed everyone that Washington is behind the coup in Kiev, that he controls Bandera, and pays their hatred for Russia. Hiding behind the "spontaneous protest": it's just a revolution, nothing personal!

"Golden Eagle" betrayed in Kiev, but he recovered from this blow, and took off in his native South-East, Ukrainian Novorossia. And the point is not that his fighters became the physical points of growth of protest, from which a popular uprising was born. Although it is very important.

It is much more important that for three months of confrontation of the “Golden Eagle” to the neo-Nazi fighters of the Maidan there was a break in the social and political sentiments in Ukraine, which made possible a rebellion of the people.

Bandera propaganda now sculpts a new children's lie about Russian special forces, gangsters and terrorists in the Donbass: "Onizhedeti." And they will fall again into the pit of their own lies. Why should Russia introduce special forces, so be substituted, when there is no need for this, when there is a “Berkut” in the South-East!

But Russia remembers, and will always remember, that it was the “Berkut” that opened the world’s eyes to the new Galician fascism. What exactly the resistance of the "Berkut" woke up the South-East of Ukraine, gave rise to anti-Maid sentiments, rallies, and, finally, Fronts.

The anti-terrorist operation of the Kiev junta in the South-East is a declaration of war to the Russian-speaking population, we must face it! John Brennan, director of the CIA and, it turns out, the curator of the Ukrainian colony of the United States, did not disdain to come to Kiev and personally give the necessary orders. Washington was forced to admit the secret visit of the director of the CIA, and immediately justified it with a children's lie: the director of the CIA (!) Made exclusively diplomatic efforts in Kiev! "Onizhedeti" everything is there!

Such intervention by Washington is changing the case: Russia will not abandon its own in the South-East! The resolution of the Federation Council on the deployment of troops to Ukraine in case of urgent need remains in force. Rasmussen understands this, and therefore childishly worried: a serious conversation begins.

After all, the usual means of democratization - the bombing from the air is impossible. In Europe, panic: the population does not believe Western propaganda, its cliché about “democracy” and “freedom” has long been associated with a simple man in the street with a new lie and a new war, events in Ukraine split the ruling class already, despite the pressure of Washington and appeals to Atlantic solidarity .

... It is symbolic that the United States suffered the first casualties in the Donbass: about twenty Americans disappeared near Donetsk, apparently mercenaries, apparently very difficult mercenaries, if John Brennan was worried about their fate. We could not find them ...
So Russia is breaking the unipolar American world in Ukraine, and the "Golden Eagle" is its battle bird!