Sevmash will hand over 3 submarines this year 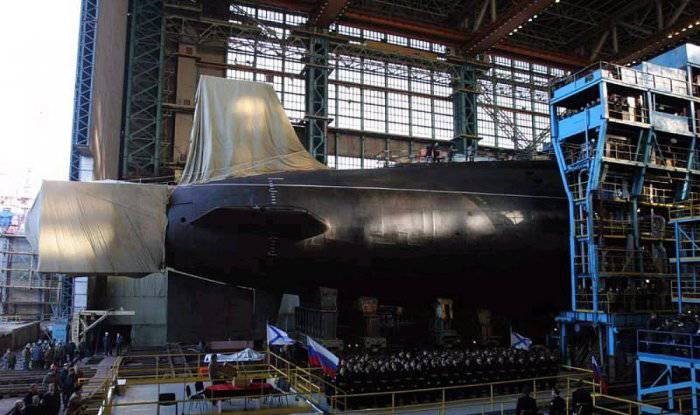 Sevmash shipbuilders to surrender to the naval in 2011 the fleet Russia immediately has 3 new generation nuclear-powered ships.
According to the plans of the plant, this year the fleet should receive the head strategic submarine of the Borey type (955 project) - Yuri Dolgoruky, the 1-th serial submarine of this type, Alexander Nevsky, and the promising multi-purpose submarine of the Ash-tree ( 885 project).

Prior to this, Sevmash players of 10 had not handed over new nuclear submarines for years. The last multipurpose nuclear-powered ship, the Cheetah, of the 971 project was transferred to the Russian Northern Fleet of Russia in only December 2001 of the year.

It is noteworthy that if the "Severodvinsk" and "Alexander Nevsky" will go to sea for the first time, the nuclear submarine "Yuri Dolgoruky" has already made more 10 outlets to the sea range. The nuclear-powered ship, in particular, was tested for seaworthiness, maneuverability and speed characteristics. The submarine conducted tests of weapons systems, shipborne equipment and systems.

The submarine "Yuri Dolgoruky" was laid on the Sevmash slipway in 1996 of the year and in April 2007 of the year was launched for completion. In 2010, the nuclear-powered icebreaker completed a sea trial program at the plant.

The strategic submarine will be armed with the new Bulava missile, which is also currently being tested. With this rocket, the cruiser will become part of the Russian Navy.

Recall that 14 launches "Bulava" were carried out earlier with the upgraded submarine "Dmitry Donskoy" type "Typhoon" (project 941). In 2011, the Bulava launches will be continued from the main carrier, the Yury Dolgoruky nuclear-powered ship.

"Sevmash" in December 2010 of the year launched the first serial submarine of the type "Borey" (project 955) - "Alexander Nevsky". The price of the nuclear powered icebreaker is actually equal to the cost of the lead ship of the series and amounts to about 23 billion rubles. Construction of the Vladimir Monomakh, another submarine of this series, is underway at the shipyard berths.

The Russian Defense Ministry plans to build at least eight Borey-type submarines. These nuclear-powered ships will become the main backbone of the Russian strategic nuclear forces at the beginning of the 21st century.

The multi-purpose nuclear-powered 4 generation of the Yasen type (885 project) Severodvinsk was developed in St. Petersburg at the Malachite engineering bureau. Submarine laying on Sevmash took place in 1993 year. According to the company, the long period of construction of the ship was determined not only by the economic difficulties that had arisen, but also by a completely new architecture of the hull and weapons. 15 June 2010. The submarine "Severodvinsk" was launched.

For the first time in the practice of Russian shipbuilding, torpedo tubes are located not in the nose of the submarine, but behind the central post section. This solution allowed to put a hydroacoustic antenna in the bow of the submarine. For rocket armament, 8 vertical launchers are used. The submarine armament complex includes: universal deep-sea self-guided torpedoes and mines, supersonic cruise missiles. The nuclear-powered ship also received promising navigation and communication complexes, equipped with a completely new nuclear power plant. The full displacement of the submarine is estimated at 11,8 thousand tons, the hull length is 120 meters. The speed of the "Ash" in the underwater position - more than 30 nodes. 85 man make up the crew of the submarine.

According to the Russian fleet command, the Severodvinsk multi-purpose nuclear icebreaker will replenish the Russian Navy this year. In addition, in July 2009 on Sevmash laid the 2-I submarine of the 885 project, called Kazan. The Ministry of Defense is planning to build six "Ash" submarines.
Ctrl Enter
Noticed oshЫbku Highlight text and press. Ctrl + Enter
Military Reviewin Yandex News
Military Reviewin Yandex Zen
Add a comment
Information
Dear reader, to leave comments on the publication, you must sign in.