And one of our Su-24 in the sea warrior! 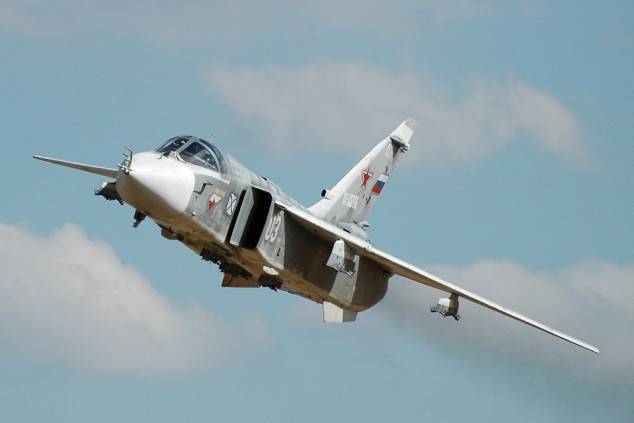 The Pentagon admitted that the imitation of the Su-24 attack on the US Navy destroyer had a demoralizing effect on the crew.

27 destroyer crew members filed resignation reports (information not confirmed. - Ed. "IN"). Commenting on their actions, they said they did not intend to put life in danger.

The Pentagon on Monday issued a statement in which it claimed that the Russian Su-24 bomber flew several times on Saturday near the US Navy destroyer Donald Cook in the Black Sea and at the same time imitated a combat attack several times.

Pentagon spokesman Col. Stephen Warren told Reuters that a Russian bomber had flown twelve times at a low altitude not far from an American destroyer. Warren called such maneuvers frightening and unacceptable. They demoralize the personnel of the ship and adversely affect the overall psychological climate among the military.

Warren noted that the destroyer patrolled the waters in the west of the Black Sea when the incident occurred. According to him, the ship is now safe in the Romanian port, where it was urgently evacuated. Members of the crew of the ship undergo the necessary procedures with a psychologist to recover from the transferred stress.

"Donald Cook" - the third ship of the US Navy, which was sent to the Black Sea lately. Earlier, the United States had already sent the Taylor frigate to the sea, but the ship ran aground near the Black Sea coast of Turkey, because of which it was unable to continue its mission.

According to international maritime treaties, American ships can not be in the Black Sea more than 14 days. Exceeding this period gives Russia the legal right to make a rocket attack and destroy these ships without declaring war on the United States. Knowing this possibility, the crew members and commanders of the American ships are naturally experiencing their lives. And although the Pentagon promised to increase the insurance sums of military personnel from 1 million dollars to 3 million dollars, very few people calmed down. Survival on the open sea and then receive an insurance payment is not enough chances. And dead money is not needed.

As a result of the events described, the crew of the Donald Cook was forced to sail with a shortage of personnel. The further dismissal of 27 crewmembers, possibly followed by others, threatens the destroyer’s continued successful execution of the task. (Anton Chumakov, news agency novorus.info)

But what about the intrepid fleet of the United States? Where, then, is the latest Aegis air defense system? This is generally what then, if for a “bearish disease” one (not the most sophisticated one, I note) of a Russian bomber is missing?

This, you know, shame the jungle.

Could not resist, called a friend. He served on the Pacific Fleet, as part of the defense, served (on the "Quick"). I asked him how this situation? “And then, a free target would be worked out. I would behave greyhound - would frighten. Only they never behaved greyhounds. Point is weak. ” That's the whole answer.

In vain "Cook" waited with protest rallies in Odessa. Soaking in the rain. Apparently, our pilot did not know about the upcoming protest rally, so he broke off the whole prospect.

And now the luxurious trough "establishes ties with the Romanian Navy." Before the Romanian frigates flaunts. And obviously not going to Odessa.

The perspective is still being drawn: at this rate, soon the entire water area of ​​the Black Sea will be filled with all kinds of troughs “performing patrols”. American, French, English, who else will tighten there?

I wonder what will happen if the old “drying” is not released, but the “carcass”? Of those in the Crimea are now tanning? So, fly?

Probably not. Well this traffic jam at the entrance to the Bosphorus will be steeper than on Andropov Avenue in Moscow. And they will beat again ...

Oh, guys, well, where are you taking? Well this is not Iraq. This is Russia. And in our life alone there was a warrior in the field. And at sea. And in heaven. It was about our pilots Vysotsky wrote: “There are eight of us - two of us. The alignment before the fight is not ours, but we will play. ” So they would sit at home, take care of the nerves. And we will populate here somehow.