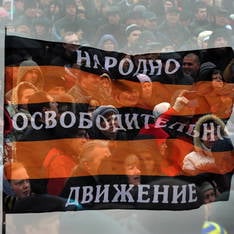 Ukraine picked up a very common disease in Europe - the separatism of rich regions. Donbass took the path of Flanders, Catalonia, the Italian “League of the North”, Scotland and other “small motherlands”, which, having a relatively developed economy or excessive resources, refuse to feed the rest of the country, which they turned out to be for various reasons. And just want to separate from her.
In the case of Eastern Ukraine, this syndrome was complicated by the fact that it was attempted to be made to make an undesirable and simply unprofitable geopolitical choice - to go towards rapprochement with the EU to the detriment of relations with Russia. And this was done by the political forces of the subsidized western regions, who seized power in Kiev. Thus, the current events on the left bank of the Dnieper have a double background - both geopolitical and economic.


Four regions of Eastern Ukraine - Dnipropetrovsk, Donetsk, Luhansk and Kharkiv regions - produce in total more than half of Ukrainian GDP. As of the end of last year, wages were higher than the national average (that is, more than $ 380 per month) was recorded in Kiev and four southeastern regions - Donetsk, Lugansk, Dnipropetrovsk and Zaporozhye. And according to estimates of the Ukrainian Foundation for Effective Governance, the five most competitive regions of Ukraine are Kiev, Kharkiv, Odessa, Donetsk and Dnipropetrovsk regions - that is, the capital, east and south.

What choice does the new Kiev authorities propose to accept in the country? The nine hundred pages of the EU-Ukraine Association Agreement, developed in deep secrecy (even Yanukovych didn’t see them almost until the Eastern Partnership Summit in Vilnius) does not promise the Eastern regions anything but an economic collapse. Full trade liberalization with the EU, almost complete ban on state subsidies to the economy, adoption of technical standards of the European Union — moreover, reconfiguration of all sectors of the economy to these standards should occur at the expense of “recustomized”, and so on. The results can be approximately as follows: the heavy industry in the southeast will die off as an untenable competitor of European concerns, the Donbas coal mines will be closed, since in the EU coal has long been considered non-ecological fuel. The national gas transmission system will come under EU control; the financial system is under the control of Western banks (as happened in most countries of Central and Eastern Europe when they joined the EU).

The uniqueness of the Euro-Ukrainian agreement lies in the fact that it provides for an “expanded and in-depth” association - not like the standard association agreements that Brussels has concluded with many countries, including the regions of the Middle East and North Africa. There are fewer pages and obligations are not. It also provides for obligations, in fact, a member state of the European Union, but at the same time - no rights. All integration projects - starting with a visa-free regime - at the level of good wishes.

For "Euro-enthusiasts" from Western Ukraine, all this is acceptable: they have nothing special to lose in economic terms - there is no large-scale industry, but there is a practice of going to work in the EU. But for Eastern Ukraine to come closer to the European Union on these terms is tantamount to economic hara-kiri. This is precisely the outcome of the possible reconciliation of the two parts of an almost split state while maintaining its current authority.

What can happen in the event of a split in eastern Ukraine? There are two options: the entry of "rebel regions" into Russia or the creation by them of a formally independent state. In the first case, the boundaries that for a quarter of a century interfered with the normal operation of a single economic complex, which once constituted the most developed part of the USSR, will be eliminated. And as a "bonus", the eastern regions of Ukraine will receive free access to the markets of Belarus and Kazakhstan, with which the Customs Union has been established with Russia.

The second variant of the “split” scenario is also associated with the Customs Union: the state of Eastern Ukraine would first of all ask for it. But serious problems are inevitable here: the breakaway part of Ukraine would remain unrecognized and undergo a boycott by the world community. And it’s far from the fact that Kazakhstan would agree to include such a problem partner in the CU. Thus, the status and economic prospects of an independent state of the East Ukrainian regions will be a big question.

Finally, there is still the possibility of a peaceful scenario of resolving the crisis: the federalization of Ukraine, the division of power between the political forces of the western and eastern parts of the country (it does not matter - equally, fraternally or by concepts) and the development of a compromise foreign policy. What in this case awaits the south-eastern regions? Most likely, nothing new: the same position of a stranger among his own and not too much of his own among strangers. It will not be possible to take full advantage of the benefits of the Customs Union, or the preferences of the EU. After all, it is impossible to combine forever two diametrically opposed development vectors. We still have to sponsor the western regions of the country and suffer from the struggle of the oligarchic clans. So, Eastern Ukraine will increasingly look at Flanders with Catalonia and learn from their experience of "civilized separatism."