Wreck of Akhtubinsky: Yak-130 crashed due to problems 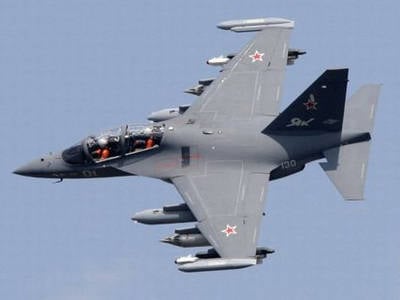 The failure of the technology caused a crash in the Astrakhan region of the Yak-130 training aircraft. The accident occurred in 20 kilometers from the runway at the airport near Akhtubinsk. The pilots on the team leader of the flight ejected. But one of them died.
Both pilots are from the Borisoglebsk Air Force Center, Interfax reports. The plane performed a training flight. There are no casualties on the earth. A commission has been set up to investigate this flight incident. Commission members will soon begin their work.
The Russian Air Force began to form a new aerobatic team - on the Yak-130. The group will be based in Borisoglebsk. For her, 9 pilots were selected.
Ctrl Enter
Noticed oshЫbku Highlight text and press. Ctrl + Enter
We are
The first steps towards the revival of the Borisoglebsky Higher Military Aviation School of PilotsThe accidents of military aircraft in Russia over the past 10 years
Military Reviewin Yandex News
Military Reviewin Google News
39 comments
Information
Dear reader, to leave comments on the publication, you must sign in.