Korean Peninsula: maneuvers, war in the media and the triumph of the economy 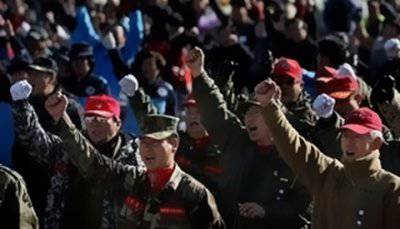 In the south of the Korean Peninsula, “the largest stories", According to local generals, air force exercises involving the United States Air Force. The purpose of the maneuvers is to develop combat skills in an environment as close as possible to the conditions of a real military conflict. Joint ground maneuvers that began on February 24 continue. This is accompanied by an extremely cheeky information warfare, which, apparently, is far from being only against Pyongyang.


In total, 103 military aircraft and about 1400 military personnel, including US marines, will participate in current military exercises. “This is a response to North Korea, which is trying to inflate tensions in the region,” the South Korean Defense Ministry said. In Seoul, they refer to the threats of North Korean leader Kim Jong-un to launch a new nuclear test cycle, recent mutual shelling in coastal waters, and Pyongyang’s attempts to resume rocket tests.

If the case were limited only to the usual military-political confrontation! The current information campaigns against the northerners remind us of the times of the Cold War, when the military and paramilitary regimes in the south of Korea called the North Korean communists as “devils” and “devilish likes”, which could not be worse than anyone in the world.

Today the situation is no better. That North Korean leader Kim Jong-un gives up at the mercy of the hungry dogs of his relative, a member of the Politburo Cho Son Tak, really sentenced to death for "attempted coup". That destroys the former deputy minister of defense with mortar fire. Recently, it was reported that Kim III had burned with the flamethrower of the chief (in fact, the deputy chief) of the national security service O Son Hon. Sadly, this “information”, as in the pro-Western Yeltsin times, is reputable in the authoritative domestic media or presented in television stories with a link (or even without links) to the British tabloid “Daily Mail”. That, in turn, refers to one of the most popular South Korean newspapers “Chosun Ilbo”. Nobody gives real evidence.

RIA "News”, However, after reports of the terrible repressions in the DPRK gave a critical comment from Russian Korean scholar, a leading researcher at the Institute of the Far East of the Russian Academy of Sciences Konstantin Asmolov. On the eve of his colleague Asmolov talked and the author of these lines. The expert once again reminded that “Joseon Ilbo”, as always, refers to anonymous sources who have already reported about the shooting of the North Korean ensemble who was offended by the authorities, and about the attempt of the “Orange Revolution” in the DPRK. “If you meet on a Ukrainian resource that professes a“ Bandera ”ideology, the information that, according to some sources, mass pogroms of Ukrainians are planned in Russia, which should be lynched by an outraged crowd consisting of fascists and FSB officers, you will put any similar news? And with regard to North Korea, everything is possible, everyone loves the hot news, and no one reads refutations! ”Asmolov indignantly.

Moscow-Seoul: an economy without politics?

Russia since the beginning of the 2000s has pursued an “equally oriented” policy on the Korean Peninsula, assures Asmolov: “You cannot say that we support the South and we are not friends with the North, and we cannot say that we support the North and we are not friends with the South. We protect our own interests. ” He notes another aspect: “When Russia raises some questions in the United Nations that the United States does not like, North Korea always votes like us, and South like America. This concerns not only the Crimea, but also how the South Koreans voted when Russia tried to hold a resolution banning the glorification of fascism in the Baltics and not only in the Baltics. The same: the North "for", the South "against."

We will, however, be objective. With all the commitment to the "Western ideals" that the current leadership of South Korea demonstrates, after the introduction of anti-Russian sanctions by the US and the EU, no one in Seoul even hinted at the abolition of the visa-free regime with our country. (But the Republic of Korea is the only country in Northeast Asia that canceled visas for Russians.) However, if you read the leading South Korean newspapers, the positive attitude will disappear right away: here you’re also occupied the “occupation of Crimea” and “aggression against Ukraine” and the whole set annoying clichés, frankly borrowed from the Western media.

Although the Russian leadership clearly separates a similar propaganda husk from a mutually beneficial business. At the end of March, Russian Economic Development Minister Alexei Ulyukayev visited Seoul and held talks with South Korean Minister of Commerce, Industry and Resources Yoon San Chikom. Korea, with a turnover of more than 25 billion dollars, is the fourth largest trading partner of Russia in Asia, after China, Japan and Turkey. Russian supplies are mainly raw materials (mineral fuels, petroleum products - 80,1%, food products and agricultural raw materials - 8,3%, metals and products from them - 6,6%), and imports from Korea are finished products. "We have an ambitious task - to increase the Russian-Korean trade to 30 billion dollars," - said the Russian minister. So it probably will. In any case, while Seoul really prefers to increase economic cooperation with Moscow. And the pro-American rhetoric of the South Korean media is not a hindrance.

For comparison: at the meeting of domestic journalists with representatives of the Embassy of the Republic of Korea in Russia, held shortly before the overthrow of Ukrainian President Viktor Yanukovych, our interlocutors acknowledged that permanent political instability in Nezalezhnaya Square does not allow them to build real economic cooperation with this country. And after a coup took place in Kiev, it became quite inconvenient to ask questions about any joint Ukraine-South Korean projects.

Simultaneously with the activity shown by the Minister of Economic Development Ulyukayev in Seoul, Russian Railways (a subsidiary of Russian Railways) began transporting coal through the non-freezing North Korean port Rajin reconstructed with the help of our specialists to countries in the Asia-Pacific region. First of all, to other ports located in the east of China. According to forecasts, the volume of coal transported through Rajin will increase by two and a half times the 2030 year.

Port Rajin, we recall, is located in the northern part of the DPRK, in 56 kilometers from the border with the Russian Federation. The capacity of the complex allows transshipping up to 4 million tons of cargo per year. The reconstruction of the railway section from our Far Eastern Hassan to Rajin and the creation of a port terminal have been going on since 2008. The opening of the Hassan-Rajin line took place in September 2013.

... Actually, I must say, Washington and Seoul tried to spoil the North Koreans a big national holiday. On April 9, the DPRK celebrated its next, 21 anniversary from that historic moment for the country, the late Kim Jong Il was elected chairman of the State Defense Committee (that is, the actual head of state). In 2014, on the same day, his son Kim Jong-un was approved for the same position. The one who "shoots, blows up and burns" his opponents. The one who, like his father, supports Russia in the most acute international issues.