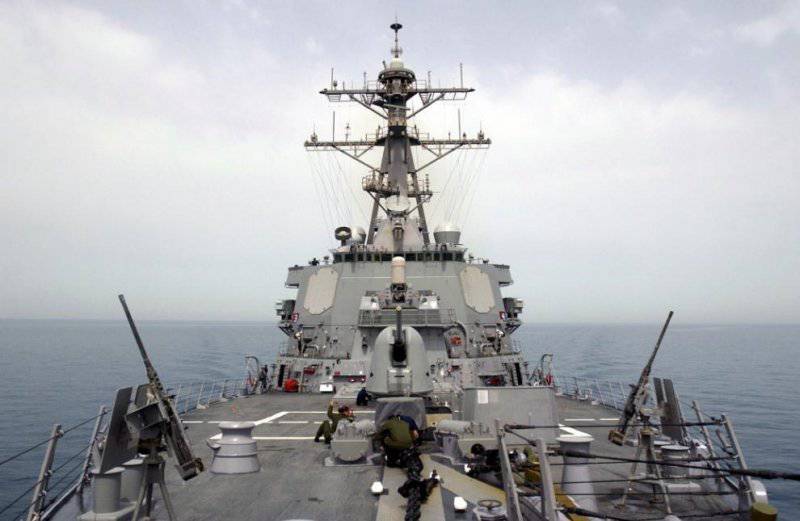 The new ritual of meeting uninvited guests is a repeated circling of the combat aircraft of the Russian Air Force. A polite reminder of who is the master of the Black Sea. Next time another polite plane arrives with polite rockets. Black Sea - Russian Sea. For centuries!

“The Su-24 bomber flew several times in close proximity to the US Navy destroyer Donald Cook, which entered the Black Sea 12 in April, reports Reuters, citing Pentagon spokesman Colonel Steve Warren, according to him. the altitude made 12 visits over Donald Cook while he was in the northern part of the Black Sea. "

In connection with the public interest in the subject of the Navy and, in particular, to the incident with the overflight of the American destroyer, I propose a detailed review of the current situation with a description of the capabilities of both sides. What threat could a bomber and destroyer pose to each other? What is this “Cook” capable of and what is the danger of its appearance at the very shores of Russia?

The ship is small - 154 meters in length, the total displacement of about 9000 tons. The regular crew is 280 people. The destroyer cost is a billion dollars in 1996 prices of the year. 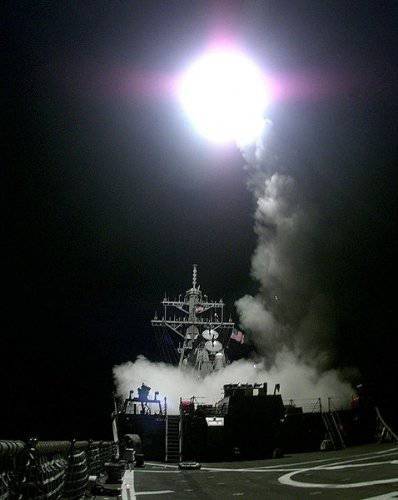 Thus, a modest destroyer is able to carry the entire range of missiles that are in service with the US Navy (with the exception of underwater ballistic missiles). The number and type of missiles can vary in any proportion, increasing the number of strike or defensive weapons. The composition of the ammunition is determined by the current task. 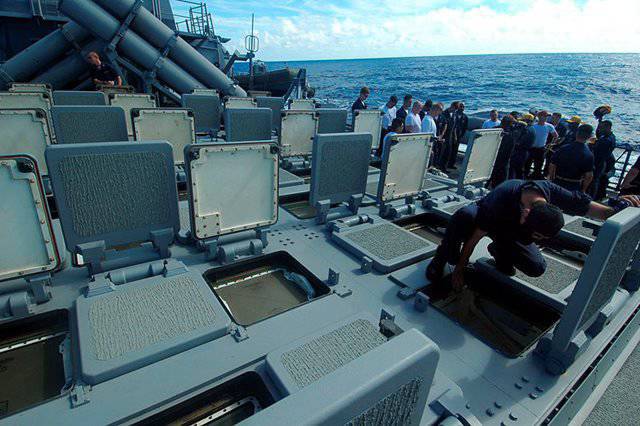 This is an extremely powerful and versatile ship, whose shock capabilities exceed the capabilities of any cruisers and destroyers of other countries. Even those who are much larger than Cook. There are no analogues of this ship in the Russian Navy.

However, do not over-estimate the American destroyer. Its impact capabilities are great, but limited to the only “fleet against the shore” combat format. High-precision Tomahawk SLCMB are good for attacking the most important military and civilian infrastructure in the depths of the enemy’s territory, but they can do nothing to help the destroyer in naval combat (the BGM-109B TASM anti-ship version was removed from weapons 10 years ago). Until the advent of the promising LRASM, the only anti-ship weapon of the destroyer “Kuk” by now remains the 4 small-sized subsonic “Harpoon” anti-ship missiles, located in the stern of the ship. 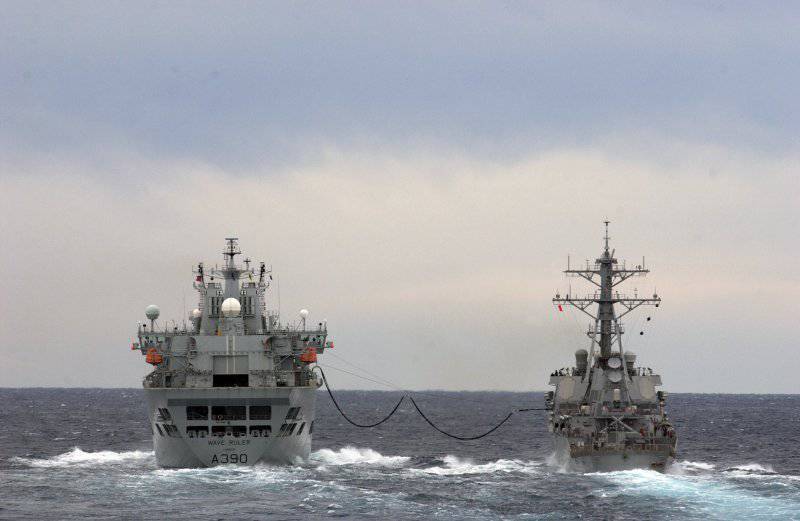 Donald Cook and the British Integrated Supply Ship RFA Wave Ruler
Nevertheless, superemployees of the “Orly Burk” type were not created to launch “Tomahawks” for those who disagree with the White House policy. The main “chip” of these ships has always been “Aegis” (“Aegis”) - a combat information and control system that connected all means of detection, communication, fire control and the struggle for survivability of a ship into a single information space. In fact, the destroyer "Donald Cook" is a naval combat robot capable of making decisions and exchanging information with other ships of the same kind without the participation of real people.

Such an intelligent and high-speed system was created to solve one, the most important and responsible task - to ensure effective air defense of the formations. Mighty air defense platforms for the protection of aircraft carriers and escorting convoys on the high seas. 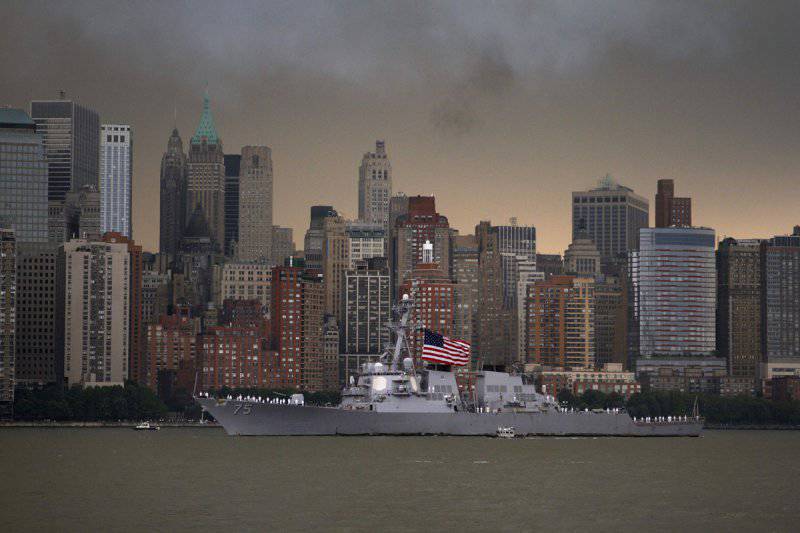 Included with the "Aegis" is certainly a multifunctional radar AN / SPY-1. A masterpiece of the US electronics industry, capable of detecting rockets flying above the water and observing satellites in near-earth orbits. This is the problem with SPY-1 - it turned out to be impossible to effectively solve such different tasks using one radar. And if there are no problems with the detection of space vehicles, then the possibility of Aegis destroyers in repelling the attacks of anti-ship missiles looks frankly dubious.

The Aegis + SPY-1 bundle looked like a very innovative solution for 1983 of the year, but by now this system is completely outdated. We can name at least five modern marine systems that are superior to Aegis in the area of ​​air defense tasks.

As a result, the Cook superfighter (like any of its 62 twins) turned out to be unable to perform the first of its tasks.

And the only awful trophy of the Aegis system for all the 30 years of its operation was the IranAir passenger airliner, which the BIUS mistakenly identified as the F-14 fighter. 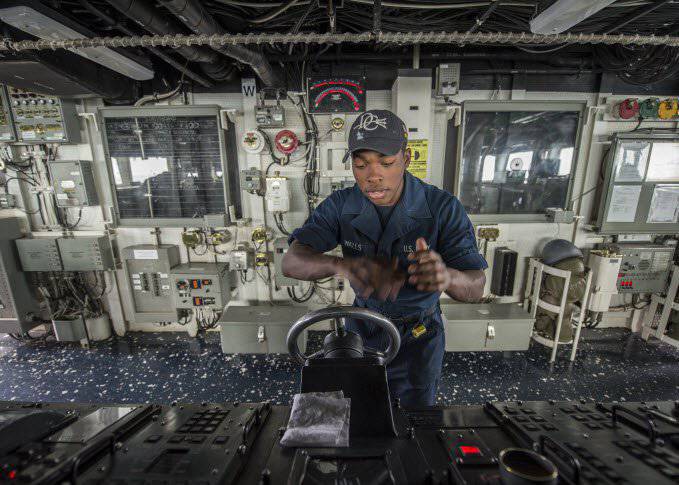 With such an “outstanding” air defense system, American Aegis destroyers are hardly worth going into the Black Sea at all. Where the entire water area is shot through by coastal missile complexes and coastal aviationable to “slam” the American tin with one blow. A lone American ship is not serious. 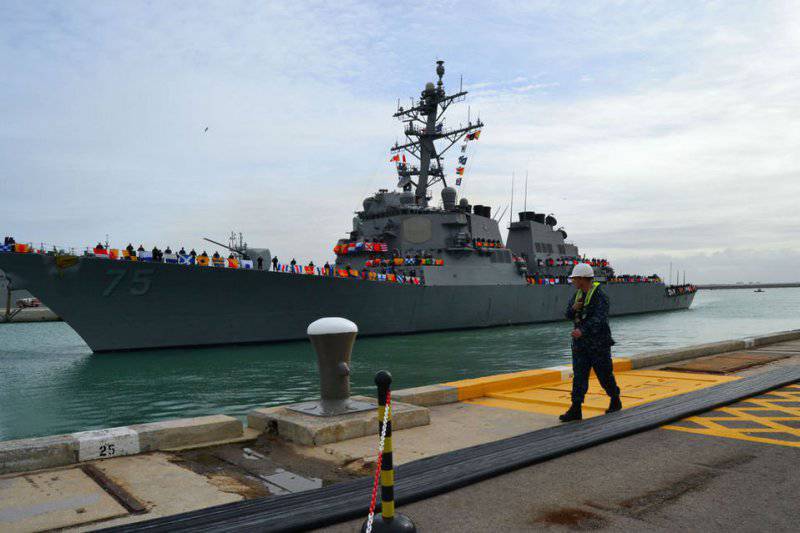 A major drawback of the destroyer "Cook", as well as all representatives of sub-series I-II, is the inability to permanently base the helicopter. The ship has only a stern landing site and a limited supply of aviation fuel. The absence of a helicopter reduces the destroyer capabilities of the destroyer and limits its functionality. 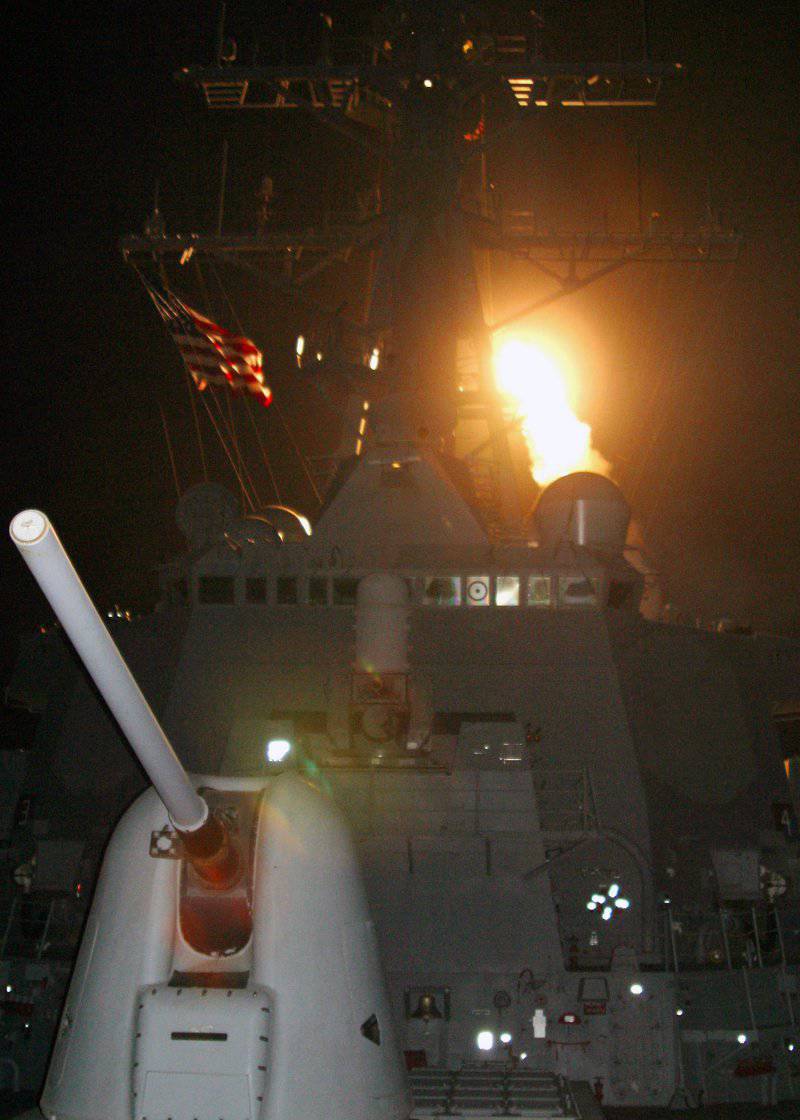 Is the explosion aboard the destroyer?
Alas, just a rocket launch from the fodder UVP 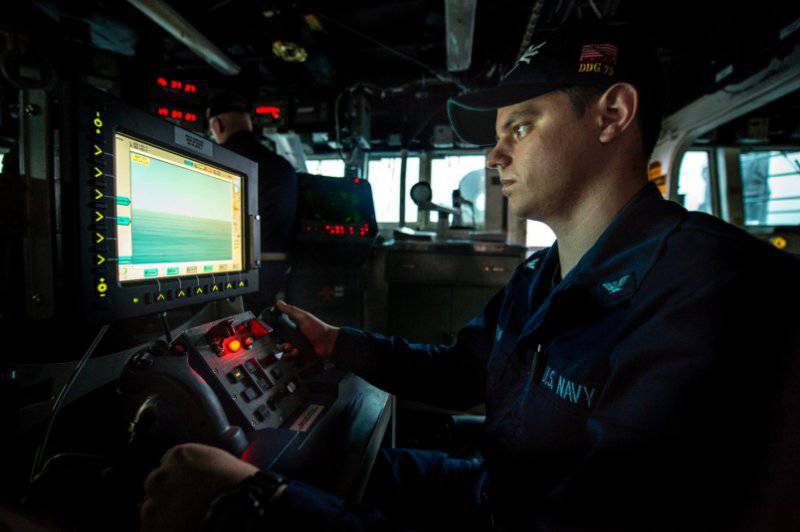 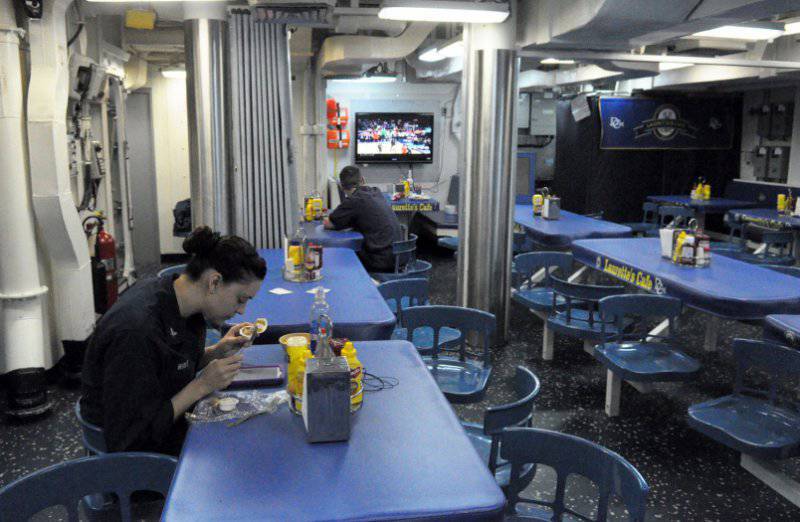 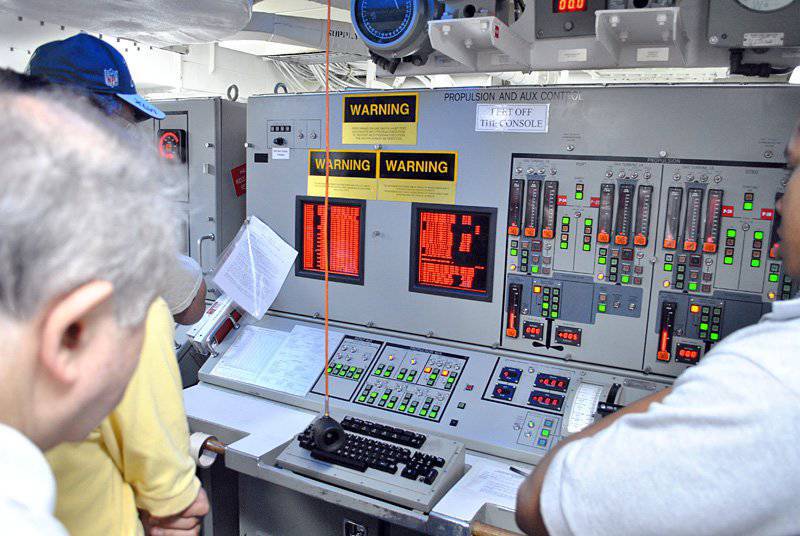 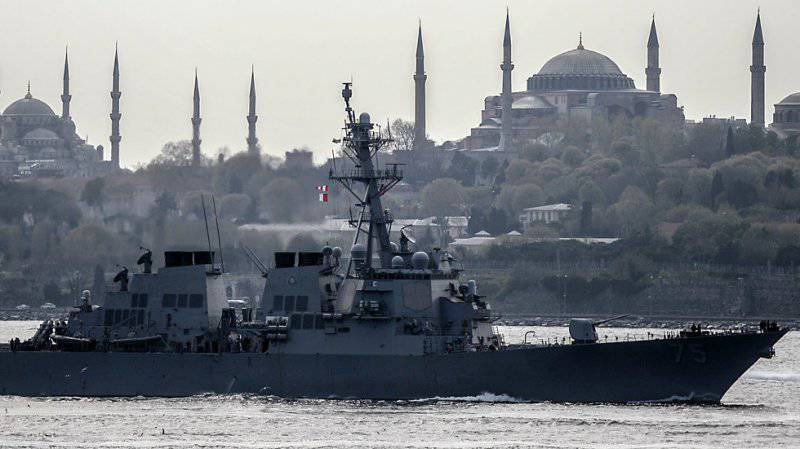 Surely many people regretted that the destroyer was flown around not by the snow-white bomber Tu-22 and not the newest Su-34 bomber, but merely by the modest 24-th "Cracker". Variable sweep front bomber, adopted for service in the distant 70-s. However, even this was enough in abundance. The Pentagon’s press service has broken out with angry accusations of provocation and “unprofessional actions” of Russian pilots. The Russian public also responded with a flurry of mocking and humorous comments in the style of “Yankees, go home!”

On Saturday, the fighter flew a thousand yards (about a kilometer) at a height of about 500 feet (150 meters) to the destroyer. The fighter had no weapons. The commander of the ship made several warnings over the radio. The maneuvers ended without incident.

In general, it is necessary to recognize that this episode from a military point of view does not make sense. Su-24 is not a German stunt dive-bomber. There is no need for him to come close to a goal a thousand yards away. Outside the XXI century. The era of precision weapons. The main method of warfare has become the remote, in which the arms operator does not see the enemy in person. 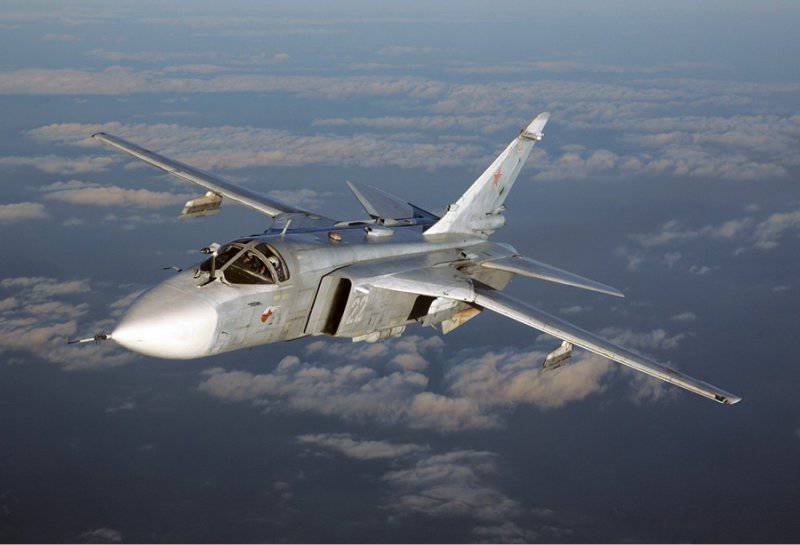 The rapprochement with the warship of the opponent in PEACE time also does not give any reasons for discussing the current situation. The incident occurred in neutral waters, where everyone is free to be where he pleases. Another thing is that the American destroyer arrived in the Black Sea - the sphere of the original interests of Russia, where the appearance of outsiders is not welcome and even specifically limited by the Montreux Convention.

The Russian bomber "passed" by the American ship on a shaving 12 time. And this is also a sign.

The only countermeasure that could be used by Aegis destroyer is to shoot down an airplane. As mentioned Iranian airliner in 1988 year. Of course, to do this in this situation was absolutely impossible - I had to endure a mockery and, as if nothing had happened, take refuge in the territorial waters of Romania.

It is useless to look for any sense in the actions of the Su-24 crew from a military point of view. “Combat sortie”, “rehearsal of the attack”, “Su-24 revealed the position of the enemy ship” - this is not about him. Combat sorties are made according to a different scheme — detection from the greatest range, launching of rockets and immediate departure to a low altitude, beyond the ship’s radio horizon. Where the SPY-1 radar will not see it. In combat, “breastfeed” to the Aegis system’s missiles is a beautiful, but not the most prudent thing.

A twelvefold circling of the “Donald Cook” had a purely demonstrative value. To temper the warlike ardor of the Pentagon, which sent the fifth warship to the region for the year, obviously believing that the Black Sea has the right to be called the African American. The Russian side had to demonstrate its determination. To show the world that we are closely following the developments in the Black Sea and, if necessary ... However, our "partners" understood everything and retreated. 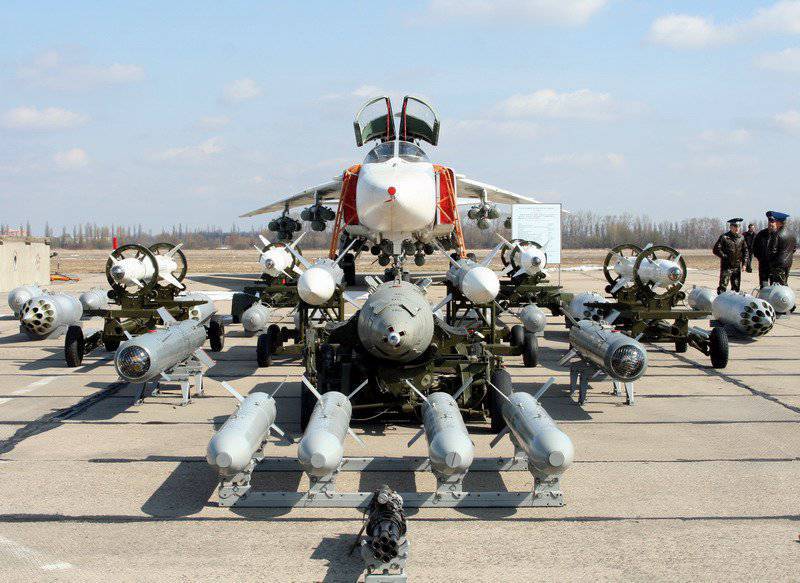 In case of need, even those who are not too adapted to attack the Su-24 ships have a lot of decent "answers" for the adversary. Of particular interest are the X-59 X-58 remote-controlled air-to-air missiles and X-3,6A missiles, which are induced by ship radars (flight speed is Mach XNUMX).