An-70: completion of state tests and unclear prospects

April 16 2014
40
On April 10, the Antonov Aircraft Company announced the completion of the most important phase of the program to create a promising military transport aircraft An-70. Antonov and the State Research and Testing Center (GNIC) of the Armed Forces of Ukraine completed state joint tests of the new aircraft. According to the results of these works, An-70 is recommended for mass production and adoption. 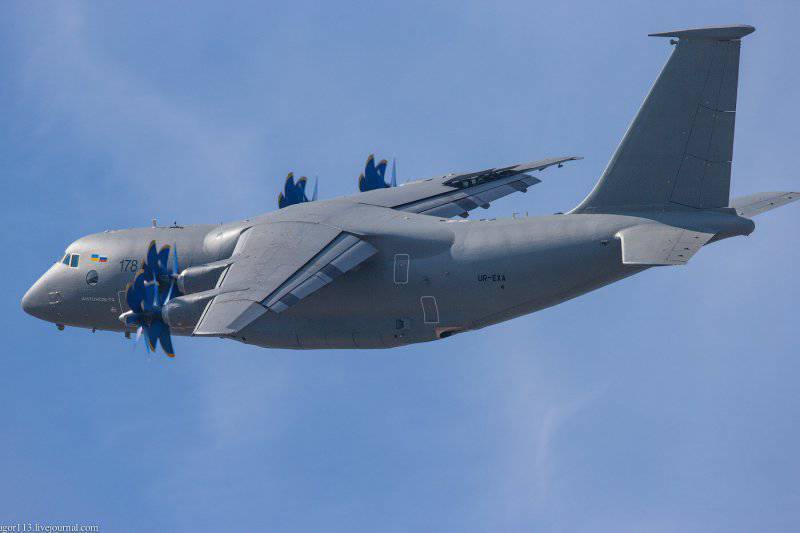 The tests were carried out using a military transport aircraft that had recently been modernized. In the autumn of 2012, An-70 with an updated composition of equipment left the shop of the plant and went out for tests. It took about a year and a half to conduct test flights. From the autumn of 2012 of the year to the end of March, the 2014 of the experienced An-70 performed a 122 flight with a total duration of 220 hours. The total flight time of several prototype aircraft during all test phases is equal to the 930 watch (753 flight).

The upgraded An-70 aircraft passed ground and flight tests, during which specialists from the development organization and the State Research and Development Center of the Armed Forces of Ukraine checked the operation of various systems and the compliance of the machine characteristics with the specified ones. During the tests, various features of the new aircraft were tested, such as the operation of modernized systems and equipment; the possibility of short takeoff and landing; accuracy of navigation using existing equipment; strength and life of the structure; the reliability of various systems and the ability of the aircraft to transport the specified goods.

The completion of state tests of the An-70 aircraft suggests that even now the development organization and the aircraft industry can prepare for the start of the serial construction of new machines. Nevertheless, despite all the optimism associated with the completion of testing, An-70 production aircraft are unlikely to be able to leave the assembly plant of the plant in the next few years. Moreover, there is reason to doubt that An-70 will generally be able to go into the series. Confirmation of this forecast can be considered all history the project, during which a promising military transport aircraft regularly encountered various technical and economic problems.

In mid-December, 2014 will mark 20 years since the day of the first flight of the An-70 aircraft. During this time, the Antonov company was able to build only three prototype aircraft and conduct a fairly large-scale program of their tests. Nevertheless, the preparation for the mass production of new technology again became not a pressing problem, but a topic for future discussions and negotiations.

Problems pursued the project An-70 from its very beginning. Thus, during the tests, one of the experienced aircraft was lost, and the other was seriously damaged. The first flight copy of the 10 crashed in February 1995 of the year (approximately two months after the first flight) and claimed the lives of seven test pilots. The cause of the accident was a collision with an An-72 escort aircraft. In 2001, in Omsk, another experienced An-70 was seriously damaged. Two engines refused to take off, which forced the crew to land on the nearest field. The result of this landing were numerous structural damage. Subsequently, the aircraft was restored. 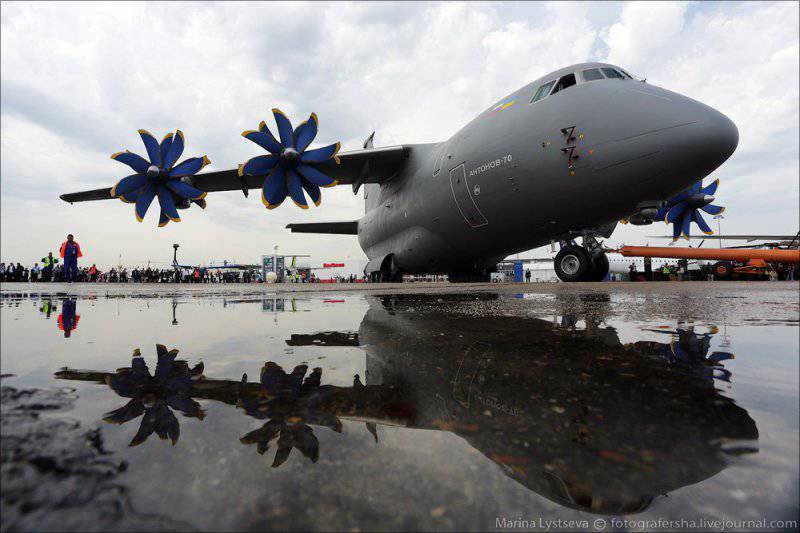 An-70 at the Le Bourget-2013 exhibition
Source: Marina Lystseva. fotografersha.livejournal.com

In addition to accidents, its economic features affected the work on the project. In the mid-nineties, it was noted that the Russian air force was interested in new Ukrainian military transport aircraft. The needs of the Air Force were estimated at 150-160 aircraft. Soon the Russian side refused to purchase the An-70 aircraft, explaining that decision by the too high price of such equipment. In addition, the claims were caused by the low reliability of the D-27 turboprop engines. The refusal of Russia from full-fledged cooperation led to a significant reduction in the financing of work, which accordingly affected the timing of the project.

Several years ago, a number of new messages appeared about the future of the An-70 project. In 2011, it became known that Ukraine intends to continue financing the development of the aircraft. At the same time, it became known that within the framework of the new state armaments program, the Russian Ministry of Defense intends to purchase 60 An-70 aircraft. At the same time, it was argued that in 2014-15, the construction of new equipment could begin at one of the Russian aviation factories.

A few days ago, the state joint tests of the prospective An-70 military transport aircraft were completed. The new aircraft is recommended to start mass production. Given the 2011-12's statements, this news I would allow to speak about the imminent signing of a contract for the supply of equipment to the Russian Air Force, but recent events cast doubt on the possibility of the appearance of such an agreement.

Serial construction of An-70 aircraft will require the cooperation of a large number of enterprises of the two countries. Against the background of relations between the Kiev authorities and official Moscow, the achievement of such agreements looks unlikely. Without Russian assistance, in turn, Ukraine will not be able to build new military transport planes. Thus, the Ukrainian events of recent months can adversely affect one of the most promising projects of recent times.

The An-70 was originally proposed to replace several types of vehicles of similar purpose. It was argued that it has several advantages over existing equipment, for example, it is capable of taking off and landing on unpaved airfields with a runway length of no more than 600-700 meters. It should be noted, in this case, the aircraft carrying capacity is limited to 20 tons. Maximum carrying capacity when using concrete runways reaches 47 tons.

These characteristics, which were one of the main ways to promote a promising project, provide the An-70 with superiority over some military transport vehicles currently in use. However, the beginning of the construction and operation of the An-70 aircraft in the foreseeable future remains uncertain. A sharp deterioration in Russian-Ukrainian relations, as well as regular threats from the new Kiev authorities, promising to stop military-technical cooperation, may again adversely affect the fate of the newest Ukrainian military transport aircraft or even lead to a complete cessation of all work.

What will be the fate of the project An-70 - will show soon. Nevertheless, it is already clear that this aircraft, with all its advantages and positive qualities, again became a victim of economics and politics. The already difficult implementation of the project, which is difficult due to insufficient funding, may be even more difficult or even impossible due to the rupture of cooperation between the two countries. For this reason, even the recent successful completion of state joint tests can hardly be considered a reason for optimism.