25 May 2013
16
2С1 entered the artillery divisions of motorized rifle regiments equipped with infantry fighting vehicles. Destination "Carnations" - the destruction and suppression of manpower and fire weapons of infantry, the destruction of field type fortifications, making passages in minefields and wire obstacles, the fight against artillery, mortars and armored vehicles of the enemy. 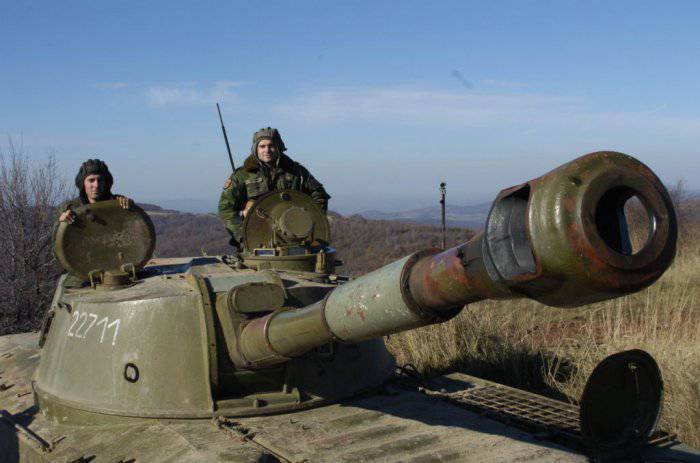 In 1967, an attempt was made to create on the basis of the D-32 for the "Carnation" howitzers with a caprule loading - the D-16 and the D-16М. But the series did not go. The layout of the 2C1 "Carnations" is basically the same as the 152-mm ACS 2C3 "Acacia". In front of the case is the driver's cabin and engine compartment, and the rear - fighting compartment. The tower accommodates three more crew members: gunner, loader and commander. The turret is rotated by electric or manual drive 360 degrees.

Caterpillars at ACS are rubber-metal, have a width of 400 mm, but can be replaced with wider ones (670 mm) for increased cross-country ability in snow and marshy areas. Basic skating rinks - with an individual torsion suspension. The first and seventh wheels, in addition to the torsion bars, also have hydraulic shock absorbers. The case is sealed. The drive wheels, located in the front of the hull, have removable toothed rims, which facilitates their replacement with excessive wear. The crawler tensioning mechanism is located inside the case. Adjusting the tension of the tracks is also carried out from inside the machine. By rewinding the tracks, the ACS floats at a speed of 4.5 km / h and is able to overcome water obstacles 300 m wide at a wave height of up to 150 mm and a flow velocity of no more than 0.6 m / s. Between the hub and the outer ring with a rubber bandage of each roller two disks are welded, forming an internal air chamber, which increases the buoyancy of the machine. At the same time on board the installation should be no more than 30 shots. “Carnation” is transportable by air, that is, it can be transported by An-12, Il-76, An-124 aircraft. To reduce the height of the ACS, the support rollers from the second to the seventh can be lifted and secured with the help of special devices during transportation. 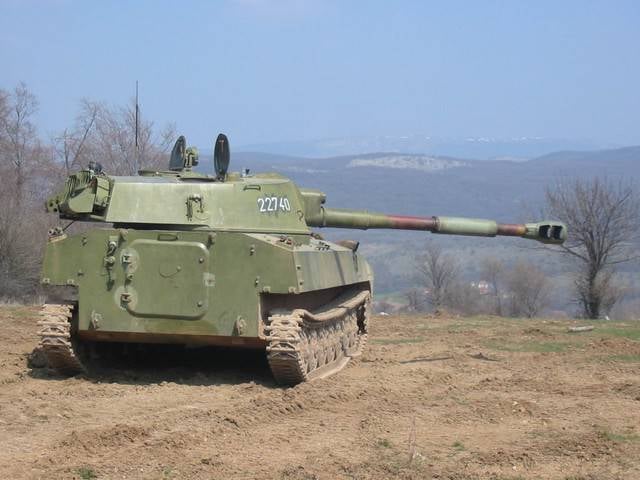 The body of the machine is welded from steel plates, the maximum thickness of which reaches 20 mm. Such a reservation provides protection against small-arms fire. weapons and fragments of shells and mines of small caliber. Self-propelled gun “holds” 7.62-mm rifle bullet B-32 from a distance of 300 m. In the walls of both sides of the hull there are three fuel tanks with a total capacity of 550 liters arranged in series between each other. The engine of the 2C1 is a V-shaped eight-cylinder four-stroke diesel engine YMZ-238В of the Yaroslavl Motor Plant. The gearbox has 11 front speeds and two rear. The on-board ammunition is located as follows: 16 shells in a vertical position along the side walls of the hull and 24 - along the side and rear walls of the tower. To facilitate the loading of the howitzers, an electromechanical-type discharging mechanism has been applied. When firing projectiles stored on the ground, they are fed into the fighting compartment using a transport device through a large rear door.

Aiming of the gun is carried out using the PG-2 sight and the OP5-37 optical sight. The howitzer barrel has vertical guidance angles from -3 to + 70 degrees. Shooting with a cumulative rotating projectile BP-1 is a special charge F-8 weighing 3,1 kg; initial speed 740 m / s; range tabular 2000 m. The armor penetration along the normal is 180 mm; at an angle 60 ° - 150 mm, at an angle 30 ° - 80 mm; armor penetration does not depend on distance. When firing a high-explosive projectile, the maximum range is 15300 m. When using an active-projectile, this figure increases to 21900 m. The minimum firing range is 4 070 m. Howitzer rate is not very high. When firing projectiles from the ground - 4-5 rounds per minute, onboard ammunition - 1-2.

The howitzer barrel consists of a monoblock pipe, a breech, a coupling, an ejection device and a two-chamber muzzle brake. Shutter vertical wedge with mechanical semi-automatic (copy) type. The lifting mechanism sector with the manual drive. Brake cylinders recoil and nakatnika secured in the breech and rolled back with the barrel. The balancing of the barrel is made by a pneumatic balancing mechanism of the pushing type. 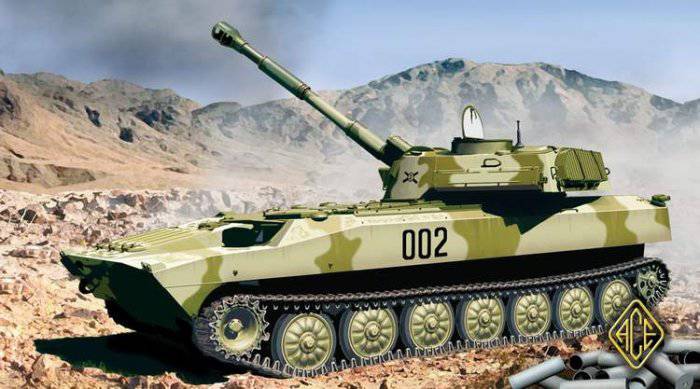 2С1 "Gvozdika" at one time entered service with all the armies of the Warsaw Pact countries (except Romania). After the unification of Germany, 374 2C1 received the Bundeswehr. "Gvozdika" is in service with the armies of the CIS and today, including in the Belarusian army. Recently, in order to improve the installation for it was developed by a laser-guided projectile Kitolov-2. This projectile can, with a high degree of probability, hit fixed and moving targets.