April 16 2014
196
After the sensational visit of the city of Kiev by the head of the Central Intelligence Agency (CIA), Mr. Brennan, the Ukrainian special services decided to intensify their work. They decided, it should be understood, not at all independently, but with the help of the “maestro”. As soon as John Brennan left the Ukrainian capital, the Security Service of Ukraine (SBU) began feverishly embodying its covenants into reality. However, the beginning of the SBU, to put it mildly, did not work. More on this.


The first “shot” (after the adviser left for the USA) from the SBU, which, from February 24, immediately after the coup d'état in the country, was headed by Valentin Nalyvaychenko, was informational, and as it turned out later, was disinformational. On official website of the departmentwhich (website) can now be read under all laws of Ukrainian democracy only in Ukrainian or English (by the way that Yatsenyuk in his address stated that in Ukraine no one forbids anyone to use the Russian language and receive information in this language), a note appeared on the establishment by the valiant Ukrainian special services of the "involvement" of the special services of Russia in events in the south-east of Ukraine. 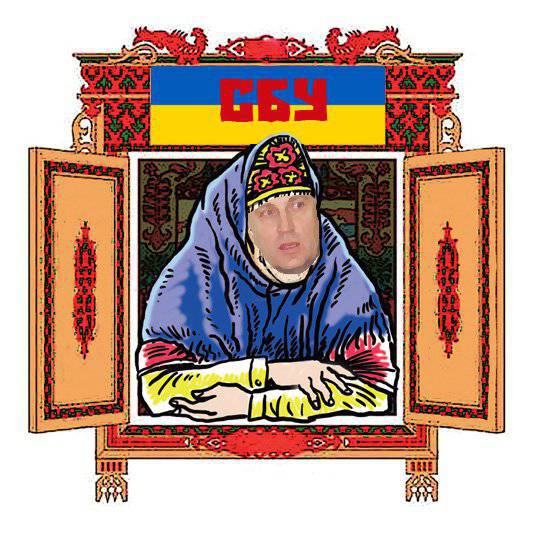 The material, which provides a link to the video publishing resource, was announced as follows:

The documented materials of the Security Service of Ukraine indicate that large-scale military aggression of the Russian Federation is taking place in the Eastern part of Ukraine, carried out by the reconnaissance and sabotage groups of the GRU of the General Staff of the Russian Armed Forces.

These groups, using heavy weapons, seize the buildings of law enforcement agencies, as well as state and local authorities.

The purpose of these sabotage groups is to terrorize the local population, disrupt the negotiations in the Ukraine-US-EU-Russian format and destroy Ukrainian law enforcement officers.

The SBU carries out measures to document the criminal activities of these groups, and also informs (in the original, the word in Ukrainian was given with an error - “inofrmue” - note “Military Review”) to the NSDC members for using this information during a large-scale anti-terrorist operation.

An interesting fact is that the Security Service of Ukraine “documents the criminal activities of Russia” via Youtube. It is interesting to choose the direction of “documenting” at least for the reason that when in the same service the materials of the conversation between Tymoshenko and Nestor Shufrich were posted, residents of southeastern Ukraine need, quote: “to shoot from nuclear weapons”, Then both Tymoshenko and representatives of the special services of Ukraine stated that it was foolish to believe the materials that are published on Youtube — they say, everything was fabricated ... If so, then why should everyone now believe this“ video ”.

So, something about the video.

According to the Security Service of Ukraine, the “tape” captures the negotiations of representatives of the Russian Main Intelligence Directorate with each other and with local “separatists”. If this is the work of the GRU, then the phrase: “Let the arrow go to the telephone” (where the “Shooter” in the caption is declared as a call sign) causes the eyebrows to travel from their usual place up - to the forehead. It is interesting, since when did the GRU officers switch to the use of mobile phones during special operations, and even take someone else's "pipes" to talk with the "coordinator" of the operation?

But the SBU also demonstrates the number of this mobile phone in one of the video frames: + 7903136 ... Guess with one attempt, in which city is such a number registered “Beeline” (Vympel-Communications OJSC)? I think you did it perfectly well - this, of course, is the city of Moscow ... What a picture emerges, though for this “freeze frame” alone. The picture is impressive with its absurdity: a certain Alexander, who some “Shooter” knows, calls one Pasha’s number, and either “Pasha” or “Alexander” is of course from Moscow ... The “Shooter”, located in Ukraine, tells “to the center "That his detachment, they say, crumbled someone, and crumbled someone, quote:" Serious "(in the" declassified "materials of the SBU the word" serious "was written several times with a firm sign ...), in addition, having suffered more losses ... Read more "Arrow" continue to advise on a mobile phone ...

Secret connection? Using special channels? No, no, no: only through a mobile phone, only with the help of a Moscow number, so that immediately on Youtube ... Against this background, the telephone tirade looks very ridiculous: “mine observe radio silence”. That is, silence on the radio, and communicate on cell phones, how many will fit ... If the SBU specialists instructed on how to misinform Mr. Brennan, then the head of the CIA is precisely the time to poison the pension, and the SBU will simply dismiss as unsuitable ...

Although it was possible that it was now very easy for the GRU employees to get through the phone - we grinned (“Military Review” edition) and dialed the phone number indicated in the e-mail clip. The man, not holding back emotions, said that his journalists had already frankly got out with their idiotic questions about the involvement of the GRU and the special operation in Slavyansk. In general, the conversation "with the GRU" did not work ...

And in the video, the extravaganza continued ... One of the interlocutors even wanted to put LifeNews on the air with “an explanation of the situation in the region”. However, the recording of this “live broadcast” for some reason is not posted. We guess why ... That's right - because there was no such broadcast, as there could be no such offer from the LifeNews channel.

At the end of the "video" laid out, no less than a little, the report of the commander of the sabotage group of the GRU of the General Staff of the Armed Forces of the Russian Federation, which ends with a striking attack: "Thank you! Goodbye!"

The SBU responded to this “wiretapping” to the Russian Defense Ministry, saying, quote:

Not only the authors of this opus, but also their “puppeteers” would like to better teach the material part and instruction on intelligence. And such slang, which is used in the "super-interception", was used only by the pioneers in the game "Zarnitsa"
(from material "RIA News").

What else was noted the other day by the Security Service of Ukraine, except for the breakout video on Youtube? One of the “achievements” is the creation, according to all the laws of American democracy, of a list of banned Russians on the territory of Ukraine. The list included, for example, the leader of the LDPR faction Vladimir Zhirinovsky. Vladimir Volfovich has already managed to respond to this prohibition through his microblog:

Where is the logic? The member of the State Council of the Russian Federation, the leader of the parliamentary party is denied entry - what kind of game is a new democracy? Ridiculous. Four of my relatives are buried in Ukraine. It turns out that, in violation of all norms, they deprive me of the right to visit their graves. The LDPR faction will insist on arousal against the acting SBU head of the criminal case. As the author of illegal lists and a possible CIA agent.

Nalyvaychenko, you will be judged by the Rostov Garrison Military Tribunal.

But the fact that Nalyvaychenko - a possible CIA agent - is not just empty words. In fact, why did the American intelligence services then, after the arrival of Nalyvaichenko, have chosen for themselves the whole floor in the building of the SBU. This information was voiced by Oleg Tsaryov for “RIA-News».

In general, Ukrainian "specialists" are now being brought up by transatlantic puppeteers, and their manners become similar - some sort of clumsy and marasmic with an eye to great success in a circle of irreversibly separate democratic elements.

Ctrl Enter
Noticed oshЫbku Highlight text and press. Ctrl + Enter
We are
Valentine's DayThe CIA and the Pentagon are awaiting new executives. Who are they?
Military Reviewin Yandex News
Military Reviewin Google News
196 comments
Information
Dear reader, to leave comments on the publication, you must sign in.