"France will punish itself." Russia may prohibit participation in the Paris arms exhibition 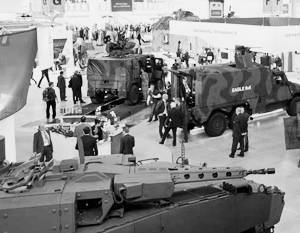 Russia's participation this year in the international exhibition of armaments and military equipment Eurosatory has been questioned. The exhibition organizers declare that the relevant "directives from above" can be received in the very near future. According to experts, this decision has not had precedents in recent decades, but on sales of Russian weapons it does not affect.


On Monday, General Patrick Cola de Franck, director general of the international exhibition of armaments and military equipment of Eurosatory, said that he did not rule out the possibility of a ban on participation in this exhibition of the Russian side.

According to him, the decision to ban Russian participation in the Eurosatory 2014 can be made within the next few weeks.

“For the time being we do not have any directives regarding the Russian participation in Eurosatory 2014 by the European Union, but they may follow shortly. So, in any case, we were told from above, ”said the general director of the ITAR-TASS Paris exhibition.

“If Russian participation in the work of Eurosatory 2014 does not take place, then for us as the organizers of this world military-technical forum it will be a great loss. Russia has already reserved a large exhibition stand and planned to present in Paris a number of the latest weapon systems, including in the form of full-scale samples. If Russia is not in Paris, I will be very sorry, ”concluded the general.

The international exhibition of armaments and military equipment of ground forces and ground-based air defense systems Eurosatory 2014 will take place from 16 to 20 June.

The exhibition is held in even years under the patronage of the French Ministry of Defense, the organizer is the General Commissariat of Exhibitions and Salons (COGES) of the Association of Arms and Military Equipment Manufacturers for the Ground Forces (GICFT).

The former head of the international treaty department - the deputy head of the main department of international military cooperation of the Ministry of Defense, Lieutenant-General Yevgeny Buzhinsky - called news about the possible ban on the participation of Russia "exotic".

“In my memory, there were no precedents for anyone to be banned from participating in the exhibition,” he told the newspaper VIEW.

“Preparations for such events take place at least a year,” added Buzhinsky. - People prepared, invested, have any plans. The organizers send official invitations, announce the conditions. Russia has a large exposition, they have already reserved a pavilion, they probably have already built something. If the organizers officially revoke the invitations, they will have to offset the costs. If the French simply do not give a visa, then this is a scandal. ”

According to the director of the Center for Analysis of the World Trade in Arms, Igor Korotchenko, in the event of a ban on participation in the exhibition, Russia will not lose anything.

“First of all, the Eurosatory exhibition will lose - it will miss the money that Russia could pay for its participation. In this case, France will punish itself, ”he told the newspaper VIEW.

“Russian weapons are so well known all over the world that if all of a sudden we don’t participate in Eurosatory, it’s not reflected in our position in the international market. I am now in Kuala Lumpur, where one of the largest regional arms exhibitions DSA 2014 is being held. Russia is actively involved here, the largest Russian defense enterprises demonstrate the latest achievements. Nobody will ban us from the world arms market. In this case, France is simply acting foolishly. The French president is losing popularity, his supporters are losing elections at the regional level, and Paris doesn’t work any extra points for Paris by any silly bans. On the contrary, it is a policy of further discrediting the Elysian Palace in the eyes of voters.

We occupy a confident second place in the global arms market. Russia sells weapons abroad in a tough competitive environment. We are opposed by everyone at various levels, from the political to the informational, but, nevertheless, this will not be reflected in the positions of Russia. The business card of our weapon is reliability, quality, efficiency. And no bans on participation in European arms exhibitions will not be able to drop Russia's authority, ”the expert continued.

“The most important thing is that we don’t sell anything to Europe, and our participation there was purely image-oriented,” Korotchenko noted. - They buy Russian weapons in the Middle East, in Latin America, in Asia, in Africa. There are exhibitions where no one can forbid Russia's participation. We are from the Paris salon neither warm nor cold. We will expand Russia's participation in exhibitions in China, in India, in Latin America. "

“In the world there are about 20 largest arms stores. We take part where we see promising markets. We simply traditionally went to the Eurosatory - France was friends with us at one time, we had prospects for the development of relations between our defense-industrial complexes. In this case, this policy of the French strike at their military-industrial complex. This short-sighted ostrich policy will result in a defeat for President Hollande in the very near future, ”he concluded.

Ctrl Enter
Noticed oshЫbku Highlight text and press. Ctrl + Enter
We are
Innovation Day of the Southern Military District: Pictures from the ExhibitionThe action “Military service under the contract is your choice!” In Rostov-on-Don: future contract servicemen, exhibitions and “Russian Knights”
Military Reviewin Yandex News
Military Reviewin Google News
40 comments
Information
Dear reader, to leave comments on the publication, you must sign in.