April 25 2011
2
Soviet and then Russian cinema to a large extent determined the attitude of several generations of people to certain types of weapons and equipment of the Great Patriotic War. This is the myth of the "German machine gunners", an exaggerated idea of ​​the mechanization of the Third Reich and, of course, the image of the PTR (anti-tank rifles).


The heroes of the films shoot one enemy tank after another. Hence the question - why is it so effective? weapon absent before the war and was in haste adopted for service only at the beginning of the war? Here you can also write reflections on a jet anti-tank grenade launcher, which would have appeared in the army, if not for repression. 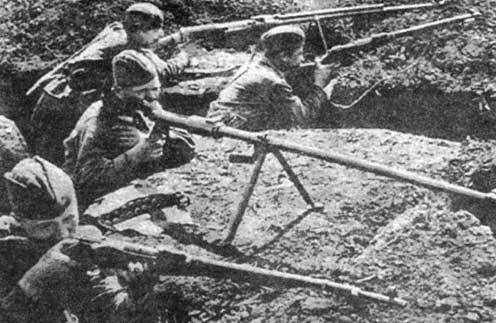 The 30-s in the USSR was the development of a rifled dynamoreactive gun, she fired not a grenade, and 37-mm projectile. Laval nozzles were installed on it and the powder charge was increased. The pressure in the barrel reached 3200 kg per cm2, their another feature is that they were muzzle charged; the projectile and the charge were fed into the barrel from a special tray. There were options and loading from the breech, the weight was more than 100 kg. The unreliability of the system, its great weight and did not suit the military. L. Kurchevsky was arrested in the 1937 year and released in the 1939 year, his guns were nevertheless put into service and released in a small party.

Another option - Kondakova gun. M. N. Kondakov was the head of the Design Bureau of the Artillery Academy until 1954, nobody repressed him. Weighed 63 kg, it also did not adopt. Another factor that played against these experiments was the armor penetration of dynamoreactive guns, which was inferior to conventional 45-mm guns. Thus, the 37-mm dynamo-reactive PTR of plant No. 8 penetrated the entire 20 mm of armor on 500 meters. The 45-mm gun confidently punched 40-mm cast armor from 300 meters.

As a result, the refusal of this development was not the repression, but the product specifications. 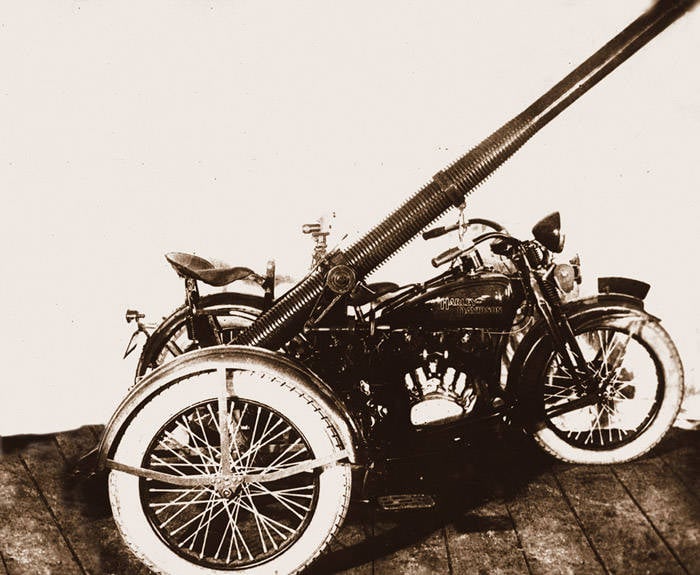 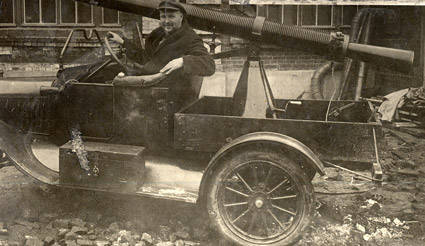 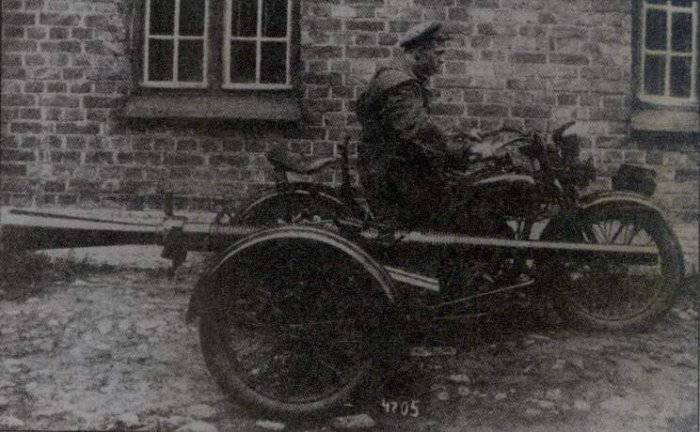 Anti-tank rifles were never considered a panacea for tanks the enemy. The German 13-mm PTR was considered a transitional model until the appearance of the 13-mm machine gun. In the USSR in 1925-1937, under M. Tukhachevsky, it was believed that an anti-tank gun is a weapon of the weak. The French army in the 30s also did not begin to work on the PTR, they assigned the main role in the fight against enemy tanks to a 25-mm cannon.

The created film image of the effectiveness of PTR has nothing to do with reality. The problem was to ensure normal armor penetration, so Rukavishnikov's gun was put into service in the 1939 year and was removed from it in August of the 1940 year. The MFR punched 20 mm on 500 meters, but when they tested 200 and 100 meters with an 30 mm armor sheet, the MFR did not break through it. The problem was in the 14,5-mm cartridge with a bullet "B-32" with a steel core. Only in August 1941 of the year (to produce steel since October 1941 of the year) adopted a cartridge with a BS-41 bullet with a metal-ceramic core. Another problem was that Rukavishnikov’s PTR was on a wheeled carriage (wheels from a motorcycle) with the calculation of 4's people. With the option on the bipod because of its large weight it was impossible to shoot. Therefore, the army refused it. 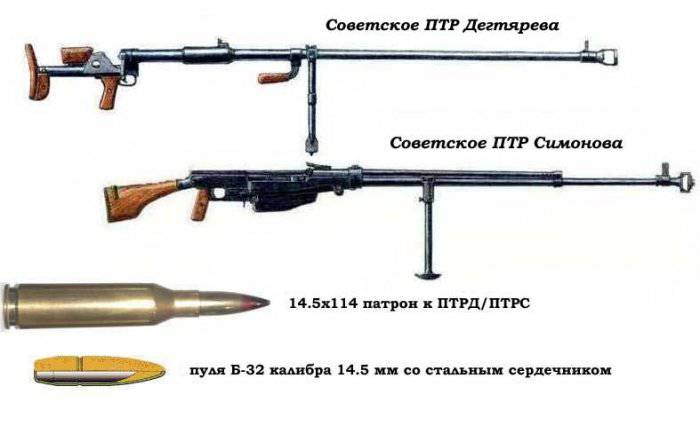 PTR could hit the tank only in the side and the stern, hitting the driver and radiator. Low penetration capabilities forced to fire from the minimum distance, which was difficult psychologically. In addition, it was not enough to pierce the armor, it was necessary to get into the crew and the vital mechanisms of the machine. The calculations were very vulnerable to enemy fire.

The rate of fire of anti-tank 37- and 45-mm guns was higher. They had a steady gun carriage with a telescopic sight, a high-explosive fragmentation projectile that could be used to hit machine gunners and enemy infantry, they did not have a unmasking muzzle brake. On the 1941 mobplan, the units were fully equipped with 45-mm cannons and 76-mm divisional cannons.

The only advantages of PTR were simplicity and low cost. PTR would not help to stop the enemy in June-July 1941 of the year, as the Poles of PTR Maroshenik of the sample 1935 of the year did not help. The reason for the success of the mechanized units of the Wehrmacht lay in the field of tactics and operational art, and not the weapons of the enemy.

The main reason that prompted them to start mass production was not the effectiveness of anti-tank weapons, which they realized after the start of the war, but the need to compensate for the huge losses of guns, at least something. A similar reason forced the production of anti-tank guns and the Third Reich. In September, the 1939 of the year was in the 62 units in the Wehrmacht, more than 1940 thousand PTRs were released in 9, and more than 1941 thousand in the 29 year. It is not right to attribute the PTR to success in the defense of Moscow; the 76-mm cannons and the 85-mm anti-aircraft missiles played a significant role. 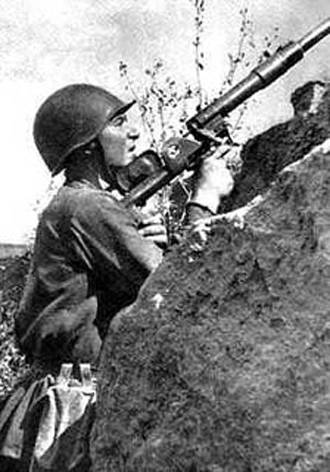 In December, the PTR platoon of 1941 was introduced at the regimental level; the division was statewide 89 PTR. In the March 1942 state of the year, a company of PTR (27 units) was deployed to the regiment level, battalions received a company of anti-tank guns, another company was in the anti-tank division. Total state was 279 units of PTR. 45-mm guns instead of 45 units became 30. Almost three hundred PTR in the division did not prevent the German tanks from reaching the Volga and the Caucasus. In December, the 1942 state in the 45-mm cannon division was 48, the PTR was 212. In December 1944, the number of 45-mm guns was increased to 54 units, the MFR was reduced to 111 units, respectively.

The MWPs were largely psychological than real weapons, they gave the infantry confidence that there was something to fight with the enemy’s tanks. PTR could not replace the anti-tank guns, so when the industry was able to restore production to the full, the guns again began to take their place, displacing the PTR. 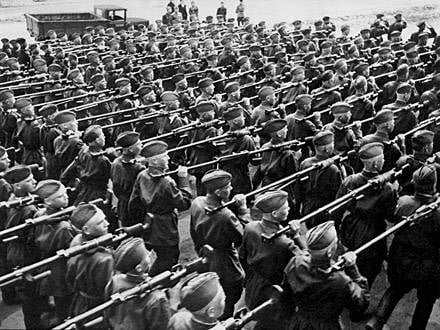