Russian gas will go to China 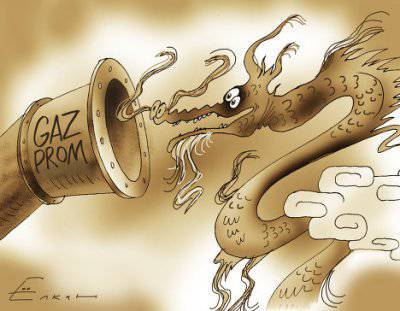 In the Chinese newspaper South China Morning Post An article was published on the prospects for gas cooperation between Russia and China. Last week, A. Miller in Beijing met with Zhou Jiping, Chairman of China National Petroleum Corporation. The newspaper notes that Russian President Vladimir Putin is likely to finally sign a long-term contract for the supply of pipeline gas to China. Ukrainian crisis will push him to this decision.


As the newspaper reminds, Alexey Miller, Chairman of Gazprom, met with Zhou Jiping, Chairman of China National Petroleum Corporation (CNPC) in Beijing to discuss the terms of the future gas deal.

According to the observer, Vladimir Putin is likely to sign an 30-year contract for the supply of pipeline gas to China. This deal has been talked about for ten years. But today, the Ukrainian crisis is forcing Russia to look for markets outside of Europe, the Chinese edition notes. Russia needs new buyers.

Also in the article it is reported that in May, V.V. Putin and PRC Chairman Xi Jinping will take the final decision in Beijing. On Wednesday, the Deputy Prime Minister of Russia (meaning Arkady Dvorkovich) said that he “hopes that the agreement will be signed next month.”

According to the publication, against the background of the Ukrainian crisis, the importance of relations between Russia and China increased (Beijing is the largest trading partner of Moscow outside the European Union and the only country in the UN Security Council that did not condemn Russia's actions in the Crimea).

As for the European market, Russia is vulnerable to Western sanctions there. In addition, there is a risk of competition with US shale gas.

Moscow oil and gas analyst Ildar Davletshin from Renaissance Capital noted that Russia could indeed make a deal with China, although showing flexibility in approaching pricing. China needs gas, the expert said, since the use of coal in the most developed parts of the country is becoming problematic.

CNPC expects to sign a contract with Gazprom in the near future. The Chinese company said that negotiations on the price of supply from Siberia to China had "active progress". Miller and Zhou will meet again, now in Moscow, at the end of April. And then, on May 20, Putin will go to China.

The Chinese edition also reminds that Ukraine today owes Russia for the supplied gas 2,2 billion dollars. Vladimir Putin sent a letter to the EU leaders, expressing "extreme concern" about Ukraine’s existing debt for Russian gas and warning them that this could affect supplies to Europe.

Dmitry Medvedev spoke about the benefits of the strategic partnership between Russia and China. His words leads "Moscow Komsomol".

Dmitry Medvedev called cooperation with the Asia-Pacific region one of Russia's key priorities. “Strengthening the eastern vector is not the answer to any measures and sanctions,” he said. - It’s just a necessity of time, it’s beneficial for our country. A well-thought out course for building a strategic partnership should bring us very impressive dividends and benefits. This region is now actively growing, and growth will continue in the near future. ”

Some details about profitable (or not very profitable) cooperation lead "Vedomosti".

First, it is reported that the gas contract should enter into force before the end of 2014.

Secondly, according to A. Dvorkovich, the parties are close to an agreement (price consultations are held practically on a daily basis). The contract is planned to be signed in May during the visit to China of Vladimir Putin. The same information was given by the presidential press secretary, Dmitry Peskov.

Thirdly, the price benchmark from Gazprom is as follows: 360-400 dollars per 1000 cube. m on the border with China. Below this price the project does not pay off. This source, "Vedomosti", close to "Gazprom", said in January 2014.

Fourth, the gas to China will go through the Power of Siberia gas pipeline - from the Chayanda field in Yakutia to Vladivostok.

Fifth, the project is estimated at 1,2 trillion. rub.

Finally, sixthly, Gazprom will most likely have to make new concessions to China. This was reported to Vedomosti by one of the interlocutors at Gazprom. Russia may reset the severance tax on the development of fields, of which gas will go to China, and cancel export duties for China, says Mikhail Korchemkin, director of East European Gas Analysis. The reason for the concessions is the Ukrainian events and the appeals of Europe and the USA to abandon Russian gas.

It is interesting, we add to this, and the question of the currency of the contract, but there is no exact information about this in the press - only guesses. You can judge this after the parties sign the document. However, it is likely that China and Russia will not pay in US dollars. However, this could be hindered by inflation, both Chinese and Russian.

Observed and translated by Oleg Chuvakin
- especially for topwar.ru
Ctrl Enter
Noticed oshЫbku Highlight text and press. Ctrl + Enter
We are
Russia at the Airshow China 2016Strangulation: the context, conduct and consequences of the American naval blockade of China
Military Reviewin Yandex News
Military Reviewin Google News
34 comments
Information
Dear reader, to leave comments on the publication, you must sign in.