"War Turchinov." Ucraine is over 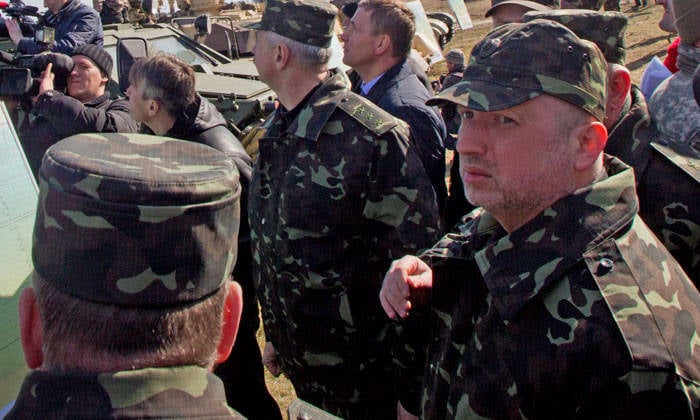 Now I will explain to you in broken English why “Turchinov's War” is the last act in the drama of the division of Ukraine. At the same time, with the help of the army, Turchinov’s decision to crush the insurgent Novorossia makes an impression история this state ended with acceptable image losses for Kiev, which not only dropped the state, but honestly lost it in the civil war.

The use of an army with heavy weapons inside the country finally translates the participants of the “Russian Spring” from the category of “protesters” or “terrorists” into the category of rebels. The well-defined and understandable status of persons in respect of whom no laws are in force and who are not related to the regime by any conventions. Let me remind you that lately everywhere, except Syria, the rebels actions ended in complete success.

At the same time, the use of the army by Turchinov takes the situation out of the context of internal affairs. We are already talking about the civil war.

In this case, rebels carry out secession, which is also an understandable format for the Western observer. The situation is configured so that the sympathies of the entire South US, which is following the newswill be entirely on the rebels side. The aerobatics would be the adoption of the name “Ukrainian Confederation” by the rebellious Southeast.

In this regard, I remind you that in Odessa, a very simple and understandable flag of Novorossia was developed a long time ago, which will produce a real psychological explosion in the West and will be very nice here (a combination of red and adress flags, the traditional Russian tricolor).

The funny thing is, on the side of rebels, there will be a beautiful federalist term, while their opponents share only the unsympathetic unitarian (I suggest even simpler - “uniates”).

Since Turchinov uses an absolutely demoralized and inefficient army, the direct contact of which with the enemy, in fact, will be impossible, since it will immediately begin to decompose and go over to the side of the enemy.

The only sensible way to use the Turchinov army is remote strikes. That is, the bombing, the use of the MLRS and artillery. That is, what will immediately bring this war to an acceptable conventional framework and gives Russia the widest arsenal of means of influence - from direct aid and supplies. weapons before the introduction of the No-Fly Zone (I do not consider the case of direct troop deployment - this is another game).

The opening of direct hostilities legalizes the delivery of heavy weapons to the rebels, which in almost all cases cannot be distinguished from trophies taken from the Ukrainian army. The opening of military warehouses, without bringing any benefit to Ukraine, will provide an opportunity to arm the Russian Spring almost without exception.

In a short time, the volunteer army of the South of Russia, backed by the support of the local population, will be perfectly armed, disciplined and with a great military spirit, against the decaying pseudo-professional army of Kiev.

In other words, the army of Turchynov will be promoted to positions only in order to suffer defeat. Since all combat-ready military units of Ukraine are advanced to the East, their defeat will mean the termination of the existence of the Armed Forces of Ukraine as such. The winner will get everything, and his appetites will be limited only by his own prudence (it makes no sense to invade the hostile Bandera West) and US diplomatic pressure, whose actions, however, in recent months have rather stimulated the split of Ukraine than it has been braked.

The transition to the format of civil war means the ability to solve a number of problems that were difficult to solve in the framework of political confrontation. The war will completely exclude from the equation the factor of the “Right Sector”, which is bandit formations, suitable only for violent dispersal of peaceful Russian demonstrations. Those regions - Zaporozhye, Kherson, Nikolaev, Odessa, Dnepropetrovsk, where the peaceful victory of the Russian Spring was impossible precisely because of the Right Sector factor and Kolomoisky, where the peaceful Russian protest was suppressed by violence, will now quietly enter the Russian uprising orbit, being supported by armed the power of the rebels.

This is fundamentally important for us geopolitically, since the two main tasks already facing Russia are getting the rail and road to the Crimea - Kharkov-Dnepropetrovsk-Melitopol-Simferopol, without which Crimea remains an enclave for several years. This is Odessa, which is important both by itself and in connection with the corridor to Transnistria, the support of which is a matter of national honor for Russia. A purely political revolution in this direction would have been suppressed by the SBU and the Right Sector, but the export of the military revolution from Donbass would be supported by the local population (the author is quite well informed about the sentiments, for example, in Dnepropetrovsk, where they hide absolutely pro-Russian sentiment).

In other words, having unleashed the first war, the Kiev junta makes it possible to cut all those Gordian knots that would otherwise choke New Russia for several more months.

I am not discussing the scenario of direct entry of Russian troops now. Such a scenario is possible at any stage in the development of events, and it would seriously simplify the picture. It would be optimal if it were not for the fears of additional international sanctions against Russia, which should be minimized. But the fear of such a scenario is unacceptable. In a critical situation, for example, in the case of massive use against the insurgent Russian American mercenaries, Russia's intervention must be tough, in spite of any threats from the West.

I also now do not consider in detail the question of the future device of New Russia. Obviously, having signed the order on the use of troops, Turchinov completely put an end to the scenario of federalization of Ukraine. No single Ukraine is now impossible. Unitary Ukraine will exist from Kiev to Lviv, and then if it can keep in its composition the glamorous metropolis of Kiev, which, left without a fat Eastern benefit, will quickly start to miss the Square.

The fork lies only between the creation of a sovereign Eastern Ukrainian state - the "Ukrainian Confederation" and the direct entry into Russia.

Much says in favor of independence. Smaller foreign policy costs. The opportunity to make a complete political reload in the country that survived the revolution of the Russian Spring and create a better model of statehood there than in the Russian Federation itself. But it’s not too flattering about “Ukraine without oligarchs”. Having provided at least neutrality in the critical early days of the uprising, Akhmetov will remain the strongest player. Another advantage could be the refusal to import many negative aspects of the life of the modern Russian Federation. For example - the preservation of a tough Ukrainian migration policy.

But all the delights of independence outweigh one “but” - for the largest Donetsk-Pridneprovsk industrial region in Eastern Europe, a suspended legal status is impossible. In order to fully work and develop, it must be built into a large economic system, the system of Russia.

The residents of Novorossia themselves are well aware of this, so in closed polls where only residents of the regions can participate, the choice is only between Russia (there are more 50% for it, even in the most controversial regions) and Ukraine, and only a small minority for independence.

Therefore, Russia with a sound mind and full clarity of goals should prepare for the reintegration of southern Russia into our state. Moreover, the normal development of the country while maintaining the amputation of the South of Russia is simply impossible.

Ctrl Enter
Noticed oshЫbku Highlight text and press. Ctrl + Enter
We are
Military reform as an integral part of the security concept of the Russian Federation: Systematic dynamic assessmentInterview by President Bashar Al-Assad to the Sunday Times
Military Reviewin Yandex News
Military Reviewin Google News
221 comment
Information
Dear reader, to leave comments on the publication, you must sign in.