The Navy has a difficult "Liner" 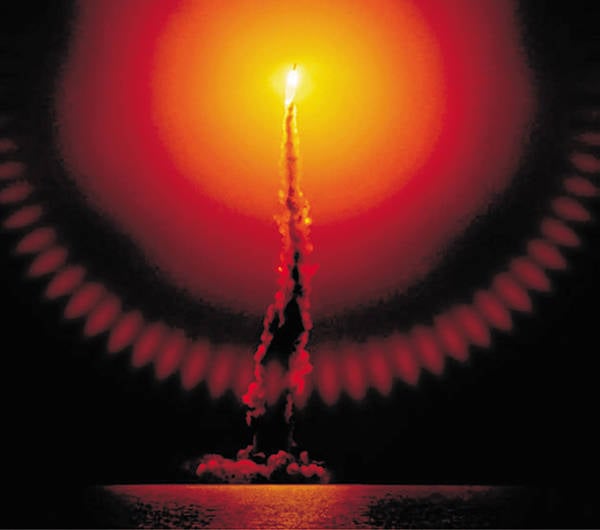 Healthy competition among leading design bureaus and enterprises of our defense industry has been preserved and, contrary to forecasts of skeptics, it gives real results. This was confirmed by the fact that the strategic submarine forces of Russia were adopting a fundamentally improved complex with the Liner missile.

This sensational event in fact went unnoticed, and only on the website of the Makeyev State Rocket Center there appeared a laconic message that “the rocket complex weapons D-9RMU2.1 with the P-29RMU2.1 rocket "The liner is accepted for service." The President of Russia, the report said, has already signed an appropriate decree.

The development of this theme, which received, like the rocket itself, the intriguing name "Liner", we have been following for at least the last three years. The first mention took place in the "RG" in May 2011-th, when made a test launch of the rocket. Then my interlocutors in the Urals (at the Makeyev Center in Miass and at the nuclear center in Snezhinsk), who had a direct bearing on this development, asked not to dive into the details and answered questions evasively, only with the most general words. On the one hand, they were afraid to jinx their own child, on the other - they did not want to stir up suspicions that this work was started in back of the unpredictable “Bulava” ...

A conversation "for understanding" with the general director, general designer of the missile center in Miass, Vladimir Grigorievich Degtyar, which took place soon after, also went to bed for a long time "under the cloth." And only now, when on the official website of the SRC it is said about "Liner" as about the completed development, the time has come to call everything done with its own names.

According to Vladimir Degtyar, development work on the Liner theme was carried out on the basis of the Sinev launch vehicle, which the SRC put into service with the Navy in 2007. Designed in the Urals and manufactured at the Krasnoyarsk Machine-Building Plant, the Sineva MBR operates on liquid fuel - in contrast to the solid-fuel Bulava of the Moscow Institute of Thermal Engineering and the Votkinsky Machine-Building Plant (Republic of Udmurtia).

Solid propellant is considered a priori the most suitable for use on navy. And for a long time the Americans excelled us in this. However, in the Urals, where back in the early 80s of the last century they managed to create a 90-ton solid-fuel rocket for the world's largest Typhoon Project 941 submarines, they did not cease to improve the design and production technology of marine ballistic missiles on liquid components fuel.

Designed for armament of strategic submarines of the type "Bryansk", "Ekaterinburgh", "Karelia" (project 667 BDRM "Dolphin"), the Ural "Sineva" with a Krasnoyarsk passport proved to be a very promising brainchild. Its undeniable advantage was the fact that the rocket was manufactured at the plant in Krasnoyarsk in a ready-encapsulated form and did not require manipulation of the fuel before loading into the submarine’s missile shaft. The time for pre-launch preparation has already been reduced directly on the ship.

At the same time, as our and foreign experts note, the 40-tonne "Sineva" on liquid fuel in its energy-mass characteristics (and this is primarily the ratio of the starting mass to the weight and range of the dropped payload) surpasses all modern solid-fuel strategic missiles of Great Britain, China , Russia, the United States and France.

It is known from open sources that Sineva carries four nuclear power units of medium power in its warhead. For developmental work "Liner" the first and second stages of the rocket were taken serial - from the "Blue". But the combat equipment (combat stage) is new, made specifically for Liner and allows you to install up to ten warheads of medium and small power class, as well as means to overcome the missile defense system. Moreover, such means are significantly different from those that are on the "Blue". The management system was improved, various types of trajectories were implemented.

As noted in the message on the SRC website, Liner has a number of new qualities: increased sizes of circular and arbitrary breeding zones for warheads, the use of flat trajectories in the entire range of firing ranges in astro-inertial and in astroradio-inertial (with GLONASS satellites correction) system operation modes management ...

In other words, the officially adopted new missile has not only the highest energy-mass perfection among domestic and foreign sea and land strategic missiles. Provided with the possibility of a mixed configuration of warheads of various power classes, it is not inferior (in terms of the START-3 agreement) to the Trident-2 missile system on American submarines in terms of combat equipment. And in comparison with our own Bulava, it allows you to install not six, but ten or even 12 warheads.

The multivariance of the combat equipment of the Liner missile, the creators claim, will allow it to adequately respond to changes in the foreign policy situation related to the deployment of anti-missile systems or contractual restrictions on the number of warheads.

- “Liner”, - Academician Vladimir Degtyar summed up, avoiding details, - these are already completely new features that are adapted to the ABM systems — existing ones and those that may appear in the future.

A detailed interview with the general director - general designer of the state center, Makeev VG Degtyarem we plan to publish in the near future.

JSC "GRTS Makeeva" is the lead developer of liquid and solid fuel marine strategic missile systems for the Navy. Since the beginning of such work, 8 base rockets and 18 of their modifications have been created, which formed and form the basis of the naval strategic nuclear forces of the USSR and Russia. A total of about 4000 of modern serial sea missiles were manufactured, more than 1200 was shot. Currently in operation are missile systems with SLBMs P-29РКУ2 ("Station-2), Р-29РМУ2 (" Sineva ") - they equipped nuclear strategic submarines in the Northern and Pacific Fleets. In 2008, the Sineva ICBM installed the world record of firing range for sea missiles - over 11,5 thousands of kilometers.

According to unofficial information, the cost of upgrading the Sinev missiles already in service under the Liner project can range from 40 to 60 million rubles. What means will be additionally needed to improve the control systems of the missile complex and missile firing at the submarine itself, not reported.