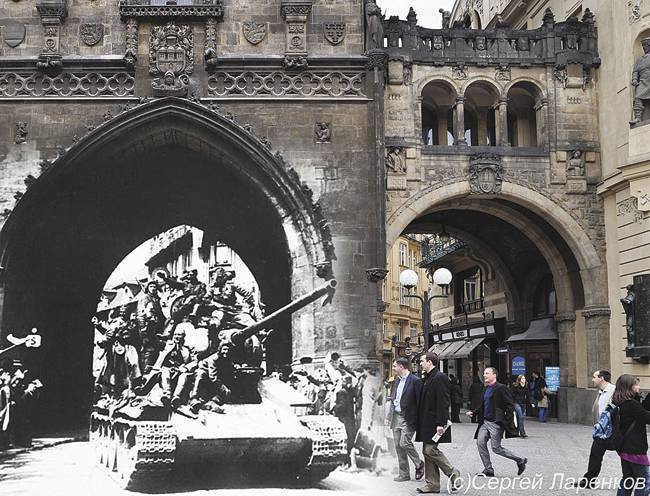 Each time, on the occasion of the anniversary of the Victory, a new portion of “revelations” and “true stories” about the last page of the Great Patriotic War - the liberation of Prague - appears in the Russian and foreign press.

On the fifth of May 1945, an anti-fascist uprising broke out in the capital of Czechoslovakia. From a military point of view, there was no special point in the Czechs ’armed uprising, which supplied the Wehrmacht with weapons all the time, from rifles to fighters, wasn’t. Three days before that, Soviet troops had taken Berlin, the united front collapsed, the Allies methodically finished off the last centers of resistance.

But the Prague people could not resist. Looks really boiling. They could not calmly look at how endless columns of Germans crawling from east to west, trying to break away from the Russians as far as possible and surrender to the Americans and the British. How could I resist, so as not to kick the almost defeated enemies, who yesterday were the absolute masters of the Czech land. 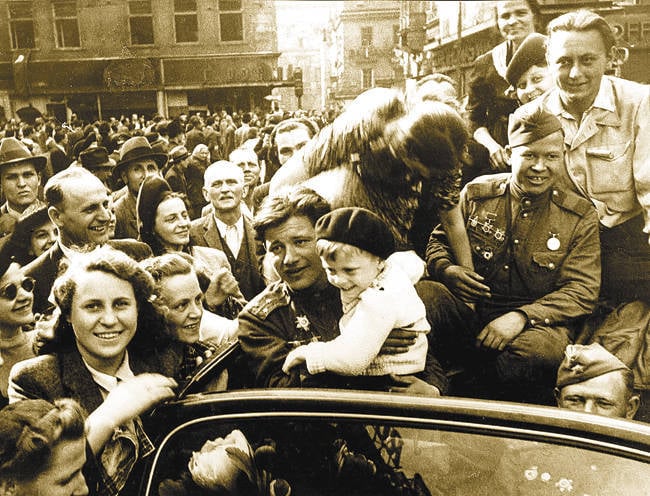 Prague residents meet the Soviet liberators. 9 May 1945 of the year

The leaders of the rebels also had political reasons: I really wanted to show the allies liberated the capital with their own government. Well, what is the situation in which Czechoslovakia is not a winning power, not worse than the same France ...

And Prague rebelled. In a matter of hours, the city flourished with national tricolors, the radio broadcast programs forbidden by the invaders in Czech, hundreds of barricades appeared on the streets, the Germans were shot from the windows and the gateway. But it soon became clear that the Czechs were in a hurry. Having learned about the fighting in Prague, the commander of the Army Group Center, Field Marshal Schörner, sent combat-retaining units to the city, with tanks and artillery, to break through the cork, which impedes the retreat to the west.

Within a day, it became clear that the uprising was failing. Panic broke out among the rebel leaders: Prague radio called for the command of the Allied armies to save Prague. By that time, the Americans stopped at Pilsen, 70 kilometers from the Czech capital and were not going to move on, because there was an agreement that the city should be occupied by Soviet troops. Those were from the scene in the 140-200 kilometers, which still had to go, overcoming the resistance of the Germans. Nevertheless, the help to the rebels did come. And from there, from where it was not particularly expected. Vlasovites from the Russian Liberation Army (ROA) decided to support the rebels ...

The “fighting” way of the “ideological fighters against Bolshevism,” who at that moment were in the vicinity of Prague, was brief and far from glorious. When the Germans became very sad, they despaired of the 1945 of March in order to send the 1 th (and in fact the only full-fledged) ROA division to the front. She was given a simple and intelligible task - to drop the Soviet troops from the bridgehead on the west bank of the Oder.

However, having lost several hundred soldiers in a couple of days and having failed to advance even a meter, the division commander “General” Bunyachenko, spitting on the Germans' demands to continue the offensive, gave the order to withdraw from the positions. From that moment on, the Vlasovites actually left the submission to the command of the Wehrmacht and moved to the south-west, simultaneously robbing the rear warehouses. Hitler's generals, who did not know how to stop the onslaught of the Soviet troops, had no time for the escaped division, and they simply gave up on it.

It is not known whether the Vlasovites sang during the raid on the rear of the Hitlerites on their march “We are marching in wide fields ...”, but they sked quickly: by the beginning of May the ROA 1 Division was near Prague. Here her commanders thought about what to do next, because there was nowhere to run. The best option Bunyachenko considered surrender to the Americans, but many of his associates doubted, and would not give out whether their compatriots.

It would be nice to somehow prove to the Yankees that the Vlasovites fought not only against the Communists, but also against the Nazis. For this desertion and robbery of warehouses somehow not enough. And it was impossible to move towards the Americans: all the roads to the west were blocked by the retreating German units. And so it was possible to wait for a meeting with the Soviet troops, which the “heroes of the ROA” wanted to avoid in every possible way.

In the beginning of the Prague uprising, the “fighters with the Stalinist regime” saw a chance: they had a real opportunity to demonstrate their anti-fascist essence to the Western allies ... 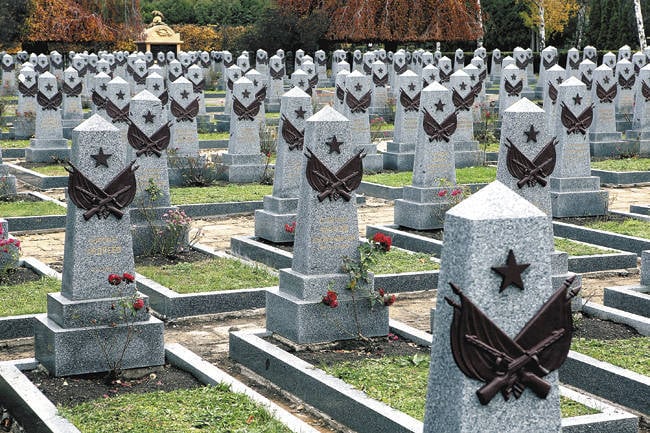 The graves of Soviet soldiers who fell on the outskirts of Prague and in the capital of Czechoslovakia itself. Olshansky memorial cemetery

Modern lawyers of Vlasovites both in the Czech Republic and in other countries (including Russia), try to present their participation in the May battles in Prague as “a sincere rush of real Russian patriots who came to the rescue of their Slav brothers”.

However, to put it mildly, this is not entirely true. This is also evidenced by the fact that at first Bunyachenko sent his regiments not to Prague, where the Czechs were dying, but to the Ruzine airfield located outside the city. There were based Me-262 fighter jets; they were not intended to strike ground targets, but they posed a real threat to the American transport aviation, which could have landed troops to help the rebels. Ruzyne's long and sturdy landing strip was ideally suited for this. However, the airfield guards managed to repel the attack.

Only after this, the Vlasovites turned towards Prague, through which lay the road to the west. In the morning of May 7 they managed to occupy several areas of the city and disarm part of the garrison. The comparative ease with which they did this was due to the fact that the Germans, because of the confusion with the connection, who did not know about the betrayal of yesterday’s allies, did not at first offer serious resistance to the people attacking them in the form of the Wehrmacht.

However, the situation soon cleared up and the Nazis took Vlasovtsev seriously: stubborn street fighting began. Here, the “heroes of the ROA” for the first time fought for real: if successful, they could present the “liberated” Prague to the Western allies and count on well-fed American captivity. They simply did not know about the agreements between the USSR and the USA regarding the fate of the Czech capital. However, by nightfall, it became clear to them that Soviet, and not American, troops would soon enter Prague.

At this “support for the uprising” by the ROA, which lasted only a few hours, ended. Under the terms of the truce, the Germans missed the columns of the division of Bunyachenko to the west, and the Nazis and the Vlasovists who had just fought with each other (!) Moved towards the Western allies ...

Vlasov still achieved their goal - came to the positions of Americans. But they did not experience the delight of meeting with "fighters for the freedom of Russia from Bolshevism." The conversation was short: “Who are you? Russians? So let the Russians deal with you. ”

Fighting continued in Prague itself, but without the participation of the ROA, and in the morning of May 9, tank units of the 1 of the Ukrainian Front of Marshal Konev entered the city.

The war ended, but the Germans continued to resist in the Czech capital and its surroundings for several more days. The losses of the Soviet troops in the Prague operation amounted to more than 50 thousands of soldiers and officers killed and wounded and several hundred units of military equipment; Vlasovites lost less than a thousand people, one tank and two guns.

As for the inevitable destruction of Prague by the Germans, which were allegedly prevented by the “heroes of the ROA”, then there is reason to believe that the damage to the city would be much less if the Vlasovites would not go there at all. After all, the Wehrmacht generals didn’t need objectively unnecessary “crimes against humanity” at that moment ...

Ctrl Enter
Noticed oshЫbku Highlight text and press. Ctrl + Enter
We are
How Stalin created Israel. By the 66 anniversary of the independence of IsraelSo who nevertheless liberated Prague in 1945?
Military Reviewin Yandex News
Military Reviewin Google News
10 comments
Information
Dear reader, to leave comments on the publication, you must sign in.