"In the east of Ukraine, the red flag of the social revolution rises" 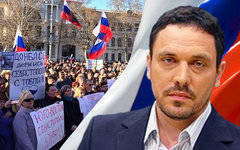 Famous journalist about events in Ukraine


The famous Russian journalist Maxim Shevchenko gave an exclusive interview to the KM.RU portal about the social background of events in Ukraine and about the attitude of official Moscow to the ongoing processes.

In the working regions of Ukraine socialist sentiment

The Russian government cannot step over itself. She created in our country a system of oligarchic capital that dominates the rest of the people, and it is difficult for her to maintain the socialist component of the protest of the East of Ukraine. Our state is not socialist and treats the left with suspicion (to those left who do not run to the Kremlin for advice). The capitalist part of the Russian government is afraid not only of the Makhnovist, anarchist, but also the red banner of the social revolution that is rising in the east of Ukraine.

We were ready to be friends with Chavez. Still would! He was far away in Venezuela. And when the "Chavez" arise in the Luhansk, Donetsk and Kharkiv regions, then friends with Chavez began to think about it. And what you do not support the Bolivarian movement on its borders? I consider that it is necessary to support. But Moscow would like, to the detriment of social demands, to present protest as a geopolitical struggle and introduce nationalist notes into it. Such an approach is doomed to failure.

In the working regions of Ukraine, socialist sentiments, while spontaneous, so far unconscious fully in the language of political struggle, are especially strong. In Russian society, left-wing tendencies and left-wing parties are also becoming stronger, and this allows us to support the fighting Luhansk, Donetsk, and Kharkov from the point of view of class interests.

The Russian elite must step over its class rejection of what is happening in Eastern Ukraine and support the popular social uprising that is unfolding there. But in any case, you can not send troops there. There are rights-based, informational and political methods, and they should be used.

We even have a movie about Kolchak, almost like a saint, and how is it different from Bandera? Both fought against the Bolsheviks. Bandera, however, was a socialist. But Kolchak advocated the collapse of the Russian Empire in February 1917 of the year and supported the February revolution. But the atrocities of Kolchak Siberia still remembers. Solzhenitsyn, venerated in Russia, by the way, did Bandera and Bandera resistance in the GULAG Archipelago in general.

Returning to the situation in the east of Ukraine, I would like to emphasize that we are dealing primarily with a robbed, destitute people whose labor rights are crushed. People turned into slaves, into serfs, who work from dawn to dawn, receiving pennies for it, and the criminal oligarchic elite make fortunes of billions. And at this time, the media set Russians on Ukrainians, and Ukrainians on Russians! The bourgeoisie always uses this universal method.

Yes, Ukrainians are a people with a special culture and their own tradition of forming a state. Yes, they have their own national identity, a separate and very strong Cossack tradition. So I would stop repeating that Ukrainians are Russians. But Russians and Ukrainians are very close to each other, and it is no coincidence that marriages between them are especially strong.

Moscow must strengthen the Orthodox unity: after all, it unites us with Ukraine. In addition, we could attract Ukrainian youth to Russia as students. I would create a multi-billion dollar fund, give grants to Ukrainian students, regardless of where they come from - from Kiev, from the East or the West. Let the young people come to us, as my grandmother and grandfather once came to Moscow. Ukrainians easily converge with Russians, but Ukrainian students have been absent from us for twenty years.

Ctrl Enter
Noticed oshЫbku Highlight text and press. Ctrl + Enter
We are
Way out of chaosOn the other side of the “red” and “white”. Izborsk Club Report
Military Reviewin Yandex News
Military Reviewin Google News
80 comments
Information
Dear reader, to leave comments on the publication, you must sign in.