Georgia is trying to block the Russian base in Gyumri 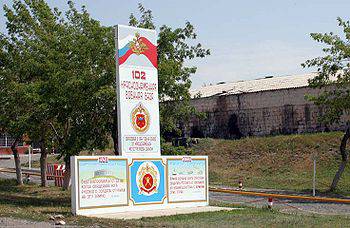 On April 20, the Georgian parliament unanimously decided to cancel the agreement with the Russian Federation on the transit of military cargo and personnel through Georgian territory to the 102 Russian military base.

True, after the 2008 war of the year, it was supplied only by air. There is also an alternative way: through the territory of Iran. Tehran is unlikely to refuse to help, it does not need to strengthen the creatures of Turkey - Azerbaijan and pro-American Georgia in the Caucasus.

Reference: 102-I Russian military base - One of the few Russian bases remaining abroad. It is deployed in Armenia, in the city of Gyumri (126 km north of the capital of the republic), with a population of about 2 Russians and 500 Armenians. The military base was created on the basis of the 2000th Motorized Rifle Division and other units of the Red Banner Transcaucasian Military District. It is part of the United CIS Air Defense System. In 127, her stay was extended to 2010. The Russian Federation does not pay Armenia for the stay of its base on its territory, since Armenia is in a difficult geopolitical situation - the unresolved Karabakh conflict with Azerbaijan, which is supported by Ankara. The external threat to Armenia, according to Russian Foreign Minister Sergei Lavrov, will be considered a threat to Russia. Armament: significant stockpiles of storage, including those remaining after the withdrawal of troops from the territory of Georgia. Roughly 2044 MiG-18 aircraft, anti-aircraft missile regiment: three batteries of the Kub anti-aircraft missile system (SAM), two S-29V batteries; tank battalion with T-72; about 300 infantry fighting vehicles and armored personnel carriers, there are army air defense systems - ZSU-23-4 Shilka, Strela -1, ZU-23-2 and other weapons (D-30 howitzers, self-propelled howitzer 2C1 Gvozdika, MT anti-tank guns -12, ATGM "Bassoon" and "Competition").

The base in Gyumri is unique in that we don’t have to pay Yerevan for the territories provided. The Armenian political elite turned out to be very sensible and understands that, without the military presence of Russia, sooner or later it will be crushed. Therefore, 102 Base plays a restraining role in the South Caucasus, preventing Baku and Ankara from moving to words. It is clear that direct intervention of Turkey (a member of NATO) in the hypothetical second war between Baku and Yerevan is unlikely, help will not be provided by troops - weapons, ammunition.

The decision of Georgia blocks air transit through its territory, as a result, Russia has only the Iranian route, through the Caspian Sea - the port of Enzeli - the Armenian Meghri. It is beneficial for Iran to help Russia, Turkey is increasingly beginning to show the ambitions of a regional power. Turkish intelligence services operate in Iranian Azerbaijan, fueling local separatism. To support the Russian Federation and Armenia in the interests of Iran, as they keep Ankara on "distant approaches", until the problem of Nagorno-Karabakh is resolved, Azerbaijan and Turkey are less active in the problem of Iranian Azerbaijan.

Georgia’s position on this issue is clearly stupid, blocking transit, they spoil relations with Armenia, further worsen relations with the Russian Federation. Although it would be time to start a constructive dialogue, without Russia the Georgian people are doomed, they cannot survive in the Big Game. In addition, Tbilisi is deteriorating relations with Iran, positioning itself as supporters of the United States, NATO, and increasing Tehran’s involvement in the problems of the South Caucasus.

A very profitable purchase - gas boiler baxi main four 240 f . Technical characteristics of this and other models, instructions for use, than to be guided in the choice of a heating device. All this you will find on the site marvel-group.ru.
Ctrl Enter
Noticed oshЫbku Highlight text and press. Ctrl + Enter
Military Reviewin Yandex News
Military Reviewin Yandex Zen
16 comments
Ad