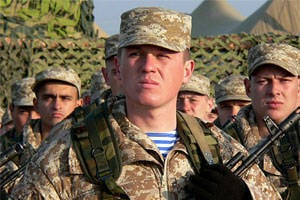 The events in Ukraine and the annexation of the Crimea to the Russian Federation, of course, affected the system of recruitment and recruitment of the Russian army. According to Anatoly Mochalkin, military commissar of the Perm Territory, recently, contract servicemen will mainly serve in the new subjects of the Federation. “In Crimea, life is getting better,” the military commissar explained, “but the border area is unstable. Therefore, those who have experience in military service will be sent there. ”


Apparently, this explains the fact that the General Staff, to a large extent, increased the initial plan for recruiting contract soldiers throughout Russia this year.

At the beginning of the year, if you recall, the Chief of the General Staff (GS) of the Armed Forces of the Russian Federation, Army General Valery Gerasimov, said that until January 1, 2015, a layer of professionals in the army and navy It should grow from 225 thousand to 241 thousand people, that is, it will be increased by 16 thousand military personnel.

Meanwhile, Yevgeny Burdinsky, the first deputy head of the Main Organization and Mobilization Directorate of the General Staff, the other day, clarified that by the end of the year this figure would be brought up to 280 thousand troops, that is, increased by 55 thousand people. Thus, at present, the plan for recruiting army and navy with contract soldiers has increased almost four times. It was previously stated that the 2014 battalions of the Airborne Forces and the 16 battalions of the marines will be fully contractual in the 17 year. And all sergeant positions will also be occupied by contract servicemen. But there have already been reports that the arctic brigade will be completed with professionals, as well as airborne units that will be deployed abroad.

According to the Ministry of Defense, the list of military posts has been expanded for contract servicemen who will serve in the landing and special-purpose units in the east of the country, as well as in the submarine and surface forces of the Pacific Fleet. According to the press service of the Eastern Military District, for the first time the recruitment to the peacekeeping battalion of a motorized rifle formation, which is deployed in the Primorye Territory, was recently opened. It is not excluded that army and navy units will be staffed with additional contingents of professionals, which will be located in the Crimea.

At the same time, as it turns out, other indicators related to manning the troops in this region have changed. For example, only land units will be partially equipped with conscripts in the Crimea. Basically there will arrive soldiers from the Volga region. According to Irina Mekhovich, Senior Assistant Head of the Department for Work with Citizens of the Saratov Regional Military Commissariat, only 20 people from their region will be selected for this draft campaign for the Black Sea Fleet. (The competition for service in Sevastopol is almost one to ten). All of them will serve in the 810-th separate brigade of marines of the Black Sea Fleet, which is deployed in the Cossack Bay of Sevastopol.

According to media reports, in the Crimea, there are still units of the Ministry of Defense, staffed mainly by Chechen contract soldiers from the former battalion of the GRU "Vostok". They are stationed mainly in places of compact residence of the Crimean Tatars near Bakhchisarai, Dzhankoy and in other areas of the peninsula.

However, as before, the young men will probably not be called up for military service from Chechnya. “So far, no instructions have been received regarding the organization of a full-scale conscription,” a representative of the Chechen military commissariat recently said. A small number of conscripts will be sent to the army and the fleet and from other hot regions of the North Caucasus. It is already known that during the spring draft, the ranks of the Armed Forces will replenish 400 recruits from Kabardino-Balkaria and Karachay-Cherkessia, the plan for recruiting new recruits from Dagestan was 900 people, 100 people will be called from Ingushetia. In these republics, there remains a significant potential of recruiting resources, which for some reason are not realized. For example, in Chechnya, the conscription contingent is over 80 thousand people. That is, it is equal to almost half of the number of recruits that the Ministry of Defense plans to call up for service throughout the spring throughout Russia. By decree of President Vladimir Putin, nearly 154 thousand are subject to military service this spring.

Against this background, the regions of the central part of Russia and Siberia report on the possible over-fulfillment of the plan for military service. For example, the military commissioner of the Irkutsk region Igor Ignashkov said that the region intends to exceed the plan of the spring draft by 10%. Additional resources are being sought for the draft of Stavropol, Krasnodar Territory, Tatarstan and Bashkortostan, where, according to the General Staff, the draft work with young people is put on a high level and there is a relatively low stratum of service dodgers.