Fall of the provisional government 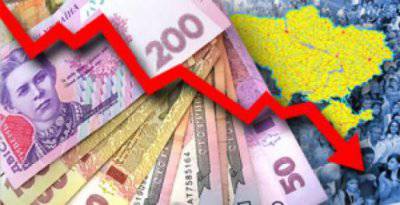 So, I promised to tell you why the "provisional government" would fall. Moreover, it will fall inevitably and in the very near future.


As Marxist science tells us, any political processes find their reflection in the economy, therefore we will speak in the language of economics.

The foundations for the current situation were laid several years ago, and to understand all the processes, you need to do a little excursion into history.

Until 2008, the economy was not something to develop; rather, it could be called stagnation, but at least it was balanced. In the 2008 year, the second coming of Tymoshenko to the prime ministers happened - and it started on a slant.

Tymoshenko did two terrible things for the economy:

a) it in a short time doubled the external debt of Ukraine, increasing it from 14,5 billions (at this point it held for ten years, from 1998 of the year exactly) to 32 billion dollars. Moreover, not a single penny of this money was spent on development. It is not clear where they went at all. Whether on populist "Yulina thousands", or simply were stolen (or in half). As a result, they began to spend much more money on debt servicing, destabilizing the budget and reducing the cost of something useful (development or social programs).

b) Tymoshenko began to provide corporate debts with state guarantees. As a result, the oligarchs gained huge loans in the west, which significantly worsened the macroeconomic indicators of Ukraine, increased the total public debt (and the proportion of guaranteed debt), and also strengthened the oligarchy.

The Azarov government continued to collect debts (albeit already much more slowly), and in three years brought the amount of public debt to 58 billion dollars. At the same time, the total debt of Ukraine exceeded billions of dollars for 130 and actually exceeded GDP.

But this would not be fatal if it were not for another factor - the trade deficit. Back in 2005, it was even positive (about 800 million dollars plus), then there was a slight minus (but within reasonable and controlled limits).

And with the start of “European integration” for the last two or three years, he abruptly went into negative territory, making 2011 billion in 9, and already 2012 billion deficit in 13-15.

If any “experts” will rub you in that “negative market conditions are to blame” or similar nonsense - spit them boldly in shameless eyes. The reason is only ONE: due to the “European integration” processes, exports to Russia and other countries of the Customs Union have rapidly declined over these two years from 34 billions in 2011 to 19 billions in 2013 (all figures are publicly available, check as many as you like). That is exactly 15 billion dollars, which is not enough.

Even a second-grader can make a conclusion: if the leadership of Ukraine had not severed economic ties with the countries of the Customs Union (primarily with Russia), then there would simply be no problems in the economy.

Moreover, the contracts concluded at the end of last year in aircraft, car and shipbuilding, the space industry and the military industrial complex, as well as the substantial discount on gas, gave Ukraine a powerful impetus for development, the like of which it did not have all 23 independence years.

Here is what Finance Minister Siluanov says about this: “In December last year, we bought a loan of Ukraine's Eurobonds in the amount of 3 billion US dollars, moreover, we redeemed under preferential conditions, the coupon rate was five percent, redeemed at par. That is, in this way they supported the economy and finances of the Ukrainian side. I would like to note that the price at which we acquired was low and preferential, since the price of the securities was quoted at completely different prices, and we bought at a reasonable price for Ukraine. This allowed the return of confidence in Ukrainian securities and confidence in Ukrainian bonds at that time. And so we helped Ukraine finance the budget deficit. ”

I will say straight: Russia, like a dolphin, tried to push the drowning Ukraine to the surface. In fact, at a loss to itself (having lost several billion dollars only on gas).

But someone does not really need a strong and successful Ukraine. And they fouled the euromaidan, using for this the pro-Western fifth column, nurtured on multibillion-dollar grants - mercenaries and professional sellers of the Motherland. And cynically deceiving the masses. And, having seized power, they began deliberately destroying Ukraine.

Let's analyze the actions of the "interim government". Immediately, as soon as the "temporary" came to power, they cancel the law on languages ​​(causing confrontation in the country), declare their refusal of gas discounts (who in their right mind would do such a thing?), Cancel protective barriers protecting domestic producers , they introduce new taxes (worsening the business climate), bring down the national currency (artificially, Kubiva’s actions have been repeatedly analyzed by me and other experts). So only frank enemies of Ukraine can act, such even stupidity cannot be described.

In addition, they break the remaining trade ties with Russia, which worsens the trade balance even more (the potential of the hole is more than 35 billion dollars). They would also like to break off industrial contracts with Russia, but, fortunately, they do not control the situation in the industrial South-East of Ukraine - this is the only reason why a huge number of people continue to work and receive salaries.

At the same time, all the talk that signing an association agreement with the EU will improve the economic situation is a cynical lie. Representatives of the EU recently voiced the possible growth of Ukrainian exports to the EU - no more than a billion a year. So we lose 35 to get 1 (one!)? What kind of "benefit" is this ?!

Can anyone name me at least one article on which it is beneficial for us to spoil relations with the countries of the Customs Union and get into the loop of restrictions on an association agreement with the EU? I do not know such people and I suspect that such people simply do not exist.

I finally found the answer to the question "what was euromaidan standing for?" For the destruction of Ukraine! And this 100% is the right answer, the others just don't exist.

What about the "war" with Russia.

The Minister of Energy of the Russian Federation noted that “Even at reduced rates, which were used until recently, Ukraine did not pay for March, that is, frankly, just a disgrace. At the same time, we understand that this ultimately forms the total amount of Ukraine’s debt. I remind you that now it is 3 billion, which the Minister of Finance talked about, that is, the volume of the bonded loan, the accumulated debt for gas in the amount of 2 billion 200 with more than million dollars, and what we consider as income that was not received by the Russian budget denunciation of the Kharkov agreements. In total, this is about 11 billion 400 million dollars. That is, the total debt burden that can be brought to recovery amounts to 16 billions 600 million dollars. This is a lot of money. ”

The temporary occupational government headed by Yatsenyuk and Turchinov is lying, lying and lying. The only truthful message voiced by them throughout their stay in power is a message that will be even worse.

They talk about "bad Russia and good Europe", but in practice it turns out to be absolutely the opposite. As noted by the “great and terrible” Putin: “The situation, to put it mildly, is strange, because, as you know, our partners in Europe recognize the legitimacy of today's Kiev authorities, but they do nothing to support Ukraine, not a single dollar, not a single euro. The Russian Federation does not recognize the legitimacy of the authorities in Kiev, but continues to provide economic support and subsidizes the Ukrainian economy with hundreds of millions and billions of dollars so far. ”

That is, the whole “war” takes place only in the information field - in the media owned by oligarchs and in the heads of individual highly inspired citizens who are not capable of perceiving information critically.

And now we turn to the explanation stated at the beginning of the text, why the “interim government” will fall.

As we can all see, Ukraine has galloping inflation. Prices are rising daily, over the past two weeks they have grown by 20-30% (and in certain areas, for example, drugs, by 50%). The dollar is growing at about the hryvnia per day, the euro is similar.

Naftogaz should pay for gas over 2,2 billion, and if Gazprom decides to switch to advance payments (as stipulated in the existing agreements for late payment), then no less than 800 million dollars. Yatsenyuk says that they will receive gas in reverse from Slovakia and Hungary, but the Slovaks have already said that they will demand payment in advance or guarantees from the EU (and the European Union, of course, is not in a hurry to give them).

«Pan othaman does not have a gold reserve, and the boys began to run away ". Undying classic. Taxes are not collected, especially in the “subsidized” (as propaganda propaganda broadcasts) the Southeast regions. But it was they who pulled the “prosperous” Center and the West on themselves.

I wrote about this scenario when I described the Kapp putsch in Germany. When dilettantes come to power, who cannot and do not understand anything in state administration, they don’t even have to be overthrown - after a short enough time they lose power automatically. And here the situation is further aggravated by their idiotic Russophobia, when they go into conflict with the only potential source of assistance.

After all, the credits of the European Union will be only later, someday, even “in two weeks”, maybe. And, as seen by any specialist, a tranche of two to three billion will not correct the situation. Not two, not ten, not even twenty-five. Is that delay the agony for a week.

How can I correct the situation and save Ukraine?

1. Expel all Russophobic politicians from the government (and better from the country).

3. To prohibit the Svoboda party, and to bring its “heroes” to criminal responsibility (mass articles).

4. Punish the real perpetrators of mass executions of people in Kiev and other criminal offenses.

5. Lyustrirovat liberal media, and the false "journalists" involved in the deliberately false propaganda, to ban life-long work on the profile.

6. Give the Russian language the status of the state, and for trying to reason about the “titular nations” - to introduce criminal prosecution. All citizens of Ukraine should be equal in rights.

7. After that, to reconcile with Russia, to hold negotiations on the restoration of gas discounts and all trade relations, as well as integrate into the Customs Union as soon as possible (this can be strengthened by conducting an appropriate all-Ukrainian referendum that will consolidate the status of this agreement).

It only a way to save Ukraine in general, and in its current borders, in particular.

Ctrl Enter
Noticed oshЫbku Highlight text and press. Ctrl + Enter
We are
What we lostList of destroyed the largest and most high-tech enterprises
Military Reviewin Yandex News
Military Reviewin Google News
65 comments
Information
Dear reader, to leave comments on the publication, you must sign in.