Moscow requires Kiev to stop fighting with its own people 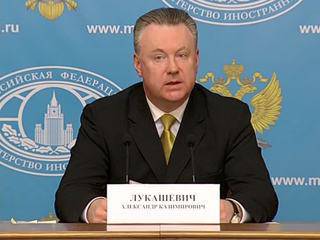 Russia demands that Maidan’s henchmen, who overthrew the legitimate president of Ukraine, stop the war with their own people and fulfill the February 21 agreement. This is stated in the statement of the Russian Foreign Ministry. Moscow is raising the issue of a crisis situation in the south-east of Ukraine for urgent consideration by the UN Security Council and the OSCE, reports the Russia 24 channel.


The Russian Ministry of Foreign Affairs stated that the “self-proclaimed Kiev authorities” “took the course of violent suppression of popular protests” and ignored the “legitimate interests” of residents of the south-east of Ukraine.

Moscow condemned the use of brute force against the protesters and the use of militants from the Right Sector in suppressing protests. Especially the Russian Foreign Ministry is outraged by the order and. Ukrainian President Turchinov to use the military during the special operation.

"The development of the situation in the south-east of Ukraine is acquiring an extremely dangerous character. The Kiev authorities, self-proclaimed as a result of a coup d'etat, headed for violently suppressing popular protests that became a reaction to the complete disregard of the legitimate interests of residents of the south-eastern regions, who does not agree with the dominance of the national radicals, the chauvinistic, Russophobic, anti-Semitic actions of the coalition that prevailed in Kiev with the direct support of the United States of America and the European Union. We strongly condemn attempts to use brute force against protesters and activists using the Right Sector militants and other illegal armed groups, ”said Alexander Lukashevich, a spokesman for the Russian Foreign Ministry,“ Turchinov’s criminal order to use the army to suppress protests is outraged. As a result of such actions, blood has already been shed in the southeast. We demand that Maidan’s appointees, who overthrew the legitimate president of Ukraine, immediately stop s war against its own people, to fulfill all its obligations under the agreement dated February 21. Western sponsors of "maydanschiki", especially those who testified the agreement, as well as the United States behind them, are obliged to curb the wards who have gone out of control, force them to dissociate themselves from neo-Nazis and other extremists, to cease using armed forces against the Ukrainian people and immediately start a genuine national dialogue with the equal participation of all regions in the interests of the speedy implementation of a radical constitutional reform. It is from the West that the ability to avoid a civil war in Ukraine now depends. The Russian side is putting the crisis situation in the south-east of Ukraine for urgent consideration by the UN Security Council and the Organization for Security and Cooperation in Europe. "

The president of Ukraine, Oleksandr Turchynov, previously appointed by the Verkhovna Rada, announced the start of an anti-terrorist special operation in the east of the country. By decision of the National Security and Defense Council, the army will participate in the operation together with the SBU. Turchinov stressed that he hopes to avoid a repetition of the Crimean scenario, and intends to prevent human casualties. Turchinov issued an ultimatum to the forces of self-defense of Slavyansk with the requirement to lay down until Monday morning weapon. He also added that Kiev is ready to discuss the empowerment of regions and the issues of local government reform. At the same time, the acting Ukrainian president promised to renew the local authority.

Ctrl Enter
Noticed oshЫbku Highlight text and press. Ctrl + Enter
We are
Review of special operation in Khasavyurt 5 May 2014A meeting of the UN Security Council on the situation in the south-east of Ukraine was held in New York
Military Reviewin Yandex News
Military Reviewin Google News
26 comments
Information
Dear reader, to leave comments on the publication, you must sign in.