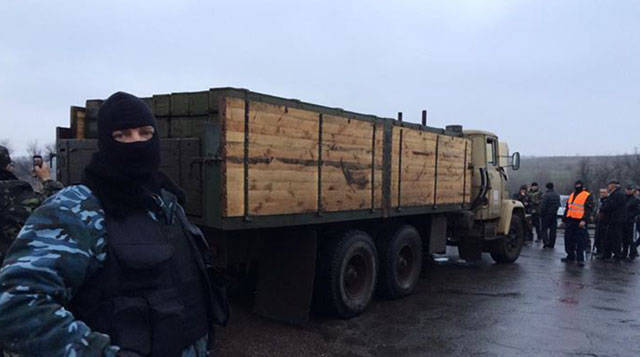 At one of the roadblocks near the city of Slavyansk, Donetsk region of Ukraine, members of the “People’s Militia of Donbass” detained a truck with shells to the multiple launch rocket launcher (MLRS) Grad. About this, ITAR-TASS, reported Ukrainian media. At the same time, sources in the Ukrainian power structures acknowledged the fact of the detention of a “truck with armament”, noting that the detainee KrAZ belongs to the National Guard of Ukraine.
Earlier, the National Security and Defense Council of Ukraine (NSDC) "decided to launch a large-scale anti-terrorist operation involving the armed forces of Ukraine."


Near Mariupol seen a column of military equipment
(Attention, profanity).

Meanwhile, in the village of Volodarskoye near Mariupol, residents blocked the road for military equipment from about 50 tanks, Armored personnel carriers, rocket launchers and military vehicles. Residents of the village and surrounding villages blocked the passage of vehicles with their cars, reports "Russian Spring". Cars continue to gather there to prevent the military from driving further. A little earlier, a column of military equipment was noticed near the village of Novokrasnovka, Volodarsky district.