The counter-revolutionary wave turned into a tsunami.

April 14 2014
152
Finally, the patience of the South-East of Ukraine is exhausted. For a long time maydanshchiki called residents of the South-East "slaves". Neo-Nazis hoped that the inhabitants of this region would put up with their power. Did not work out!


Apparently, Yanukovych was right in his statement: “When the Donbass and the Southeast rise, I will not envy anyone.” But the opponents of the Maidan said that all the values ​​of neo-Nazi militants are a myth by which the current junta can sneak into power. They said that the Maidan would be thrown out, and all its groups would be gradually eliminated so that they did not represent a threat to the new illegitimate power. They said that there would be a real dictatorship in the country, freedom of the media would disappear, any opinion different from that of the junta would become illegal. They also talked about the fact that others will come to the place of some oligarchs ... Maya-dans did not believe. "For Ukraine and freedom" fought ... It would be interesting to ask: "Well, how? Freed? ”

Generally speaking, the radical sentiments in the Southeast were from the very beginning of the Maidan. And the supporters of radical Antimaydan were significantly more supporters of the one that took place in the Mariinsky Park and on the European Square. People did not understand why, in response to the aggression of the maydanovsky militants, they should peacefully protest on weekends.

With the incomprehensible flight of Yanukovych and the actual collapse of the “Party of Regions”, which became just a “political corpse”, the genie broke free. This time the protest of the opponents of the putschists really became uncontrollable. The framework of peaceful Antimaydan disappeared. 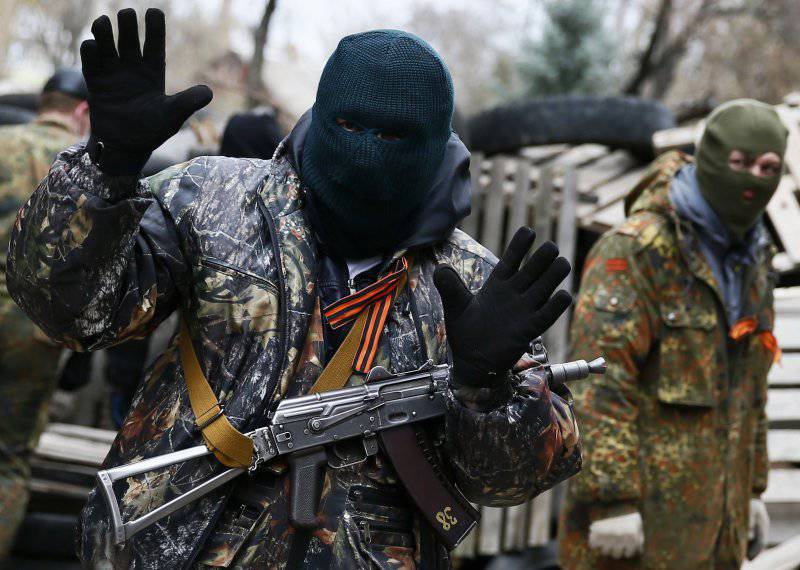 Southeast example showed Maidan. Supporters of federalization followed in the footsteps of the invaders. Why change tactics if it works? True, there are lots of differences. Then, despite the hysteria, not a single policeman, even in the western regions, became under their red-black flags. In the Southeast, dozens of policemen and special forces in different cities tie St. George ribbons, refuse to carry out the orders of the illegitimate government and openly support the protesters: in Dnepropetrovsk, Donetsk, Kramatorsk ... And how can you keep the irresponsible head of the Interior Ministry who can afford such expressions in soc. networks: "Who are the idiots that sends people to Kharkov?" (this is about the detention of militants of the Right Sector). Judging by the rhetoric, things are not going very well with Avakov. Concentrate all efforts in the Donbass will not work. 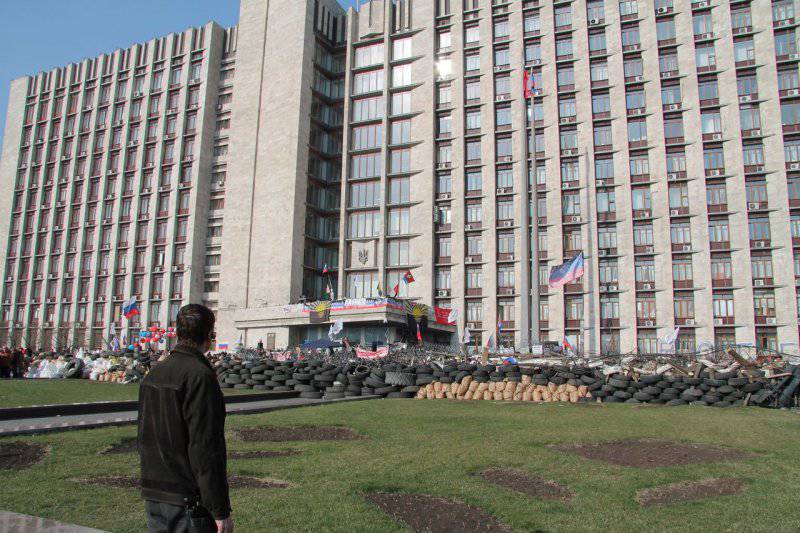 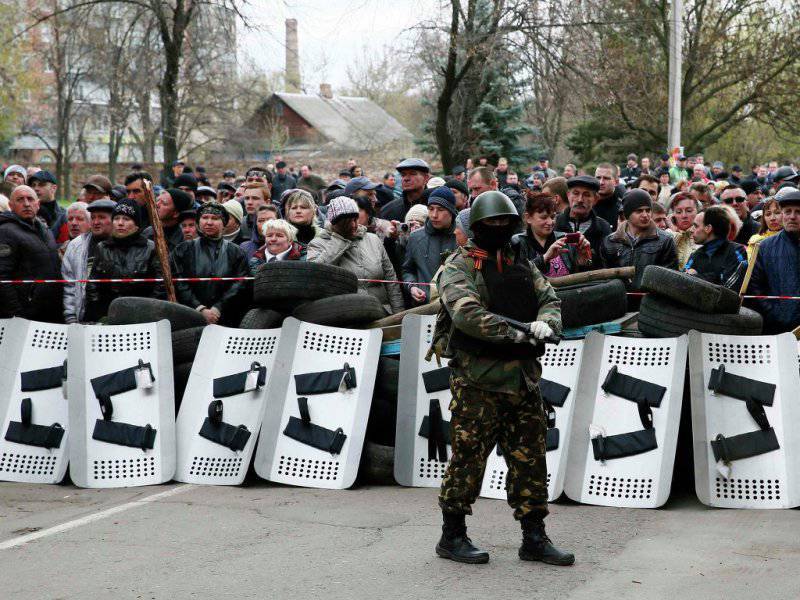 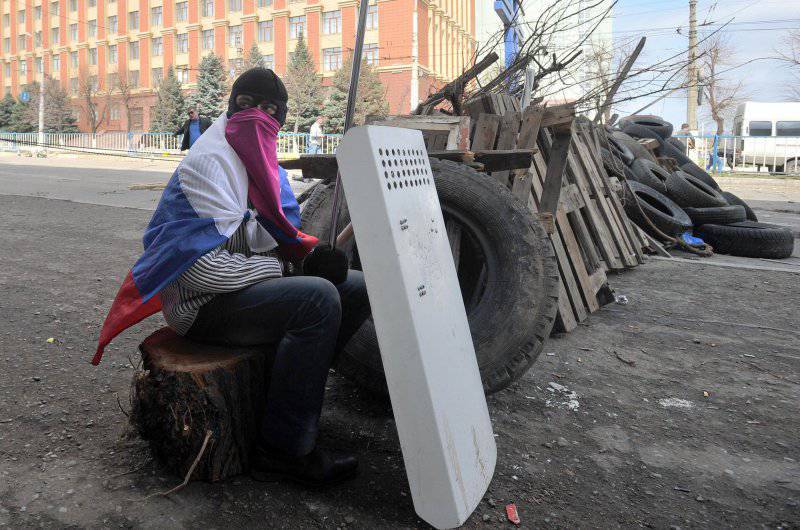 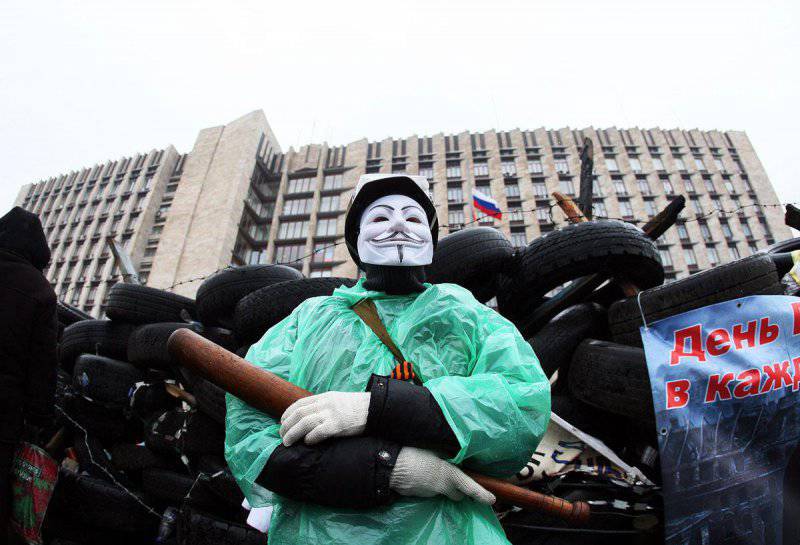 In principle, the armed pro-Russian activists threw a good puzzle for the junta. Solve it at Turchinov not too out. This is not a crazy sermon with a glass look in sects to read. The task turned out to be so difficult that I had to attract the head of the CIA.

As it turned out, the armed residents of Donbass are not unarmed activists of the Nikolaev tent camp, who were shot at point-blank from traumatic weapons militants "Right Sector". April 13 special operation failed miserably. 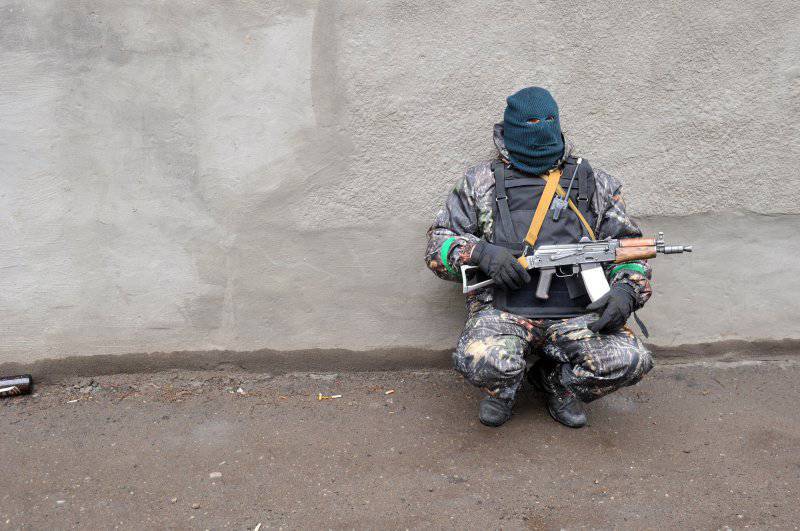 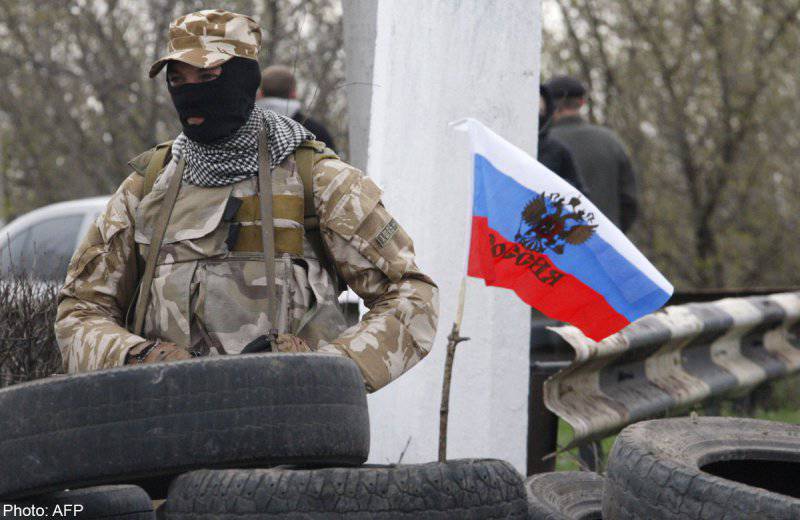 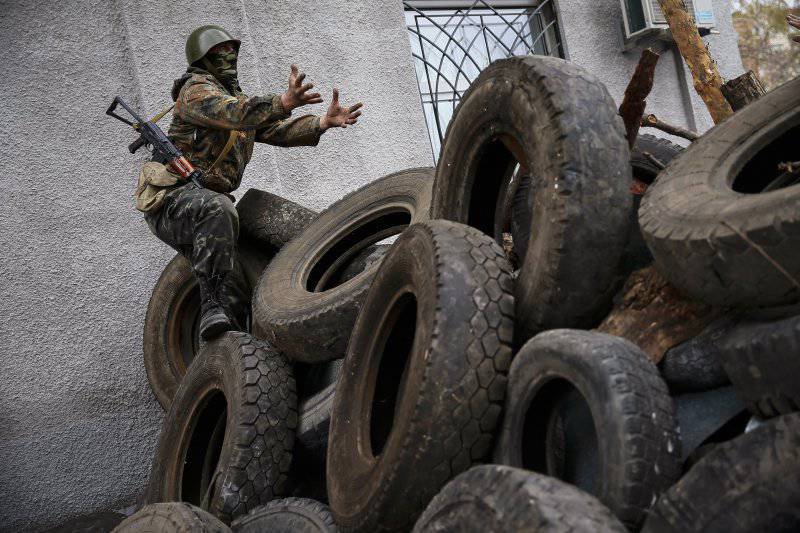 The number of rebels in the Southeast is from 1200 to 1500 people. This is enough to not only keep the defense for a long time, but to carry out the offensive. However, this is only the beginning. The number of people willing to join the ranks of the rebel army is constantly growing. 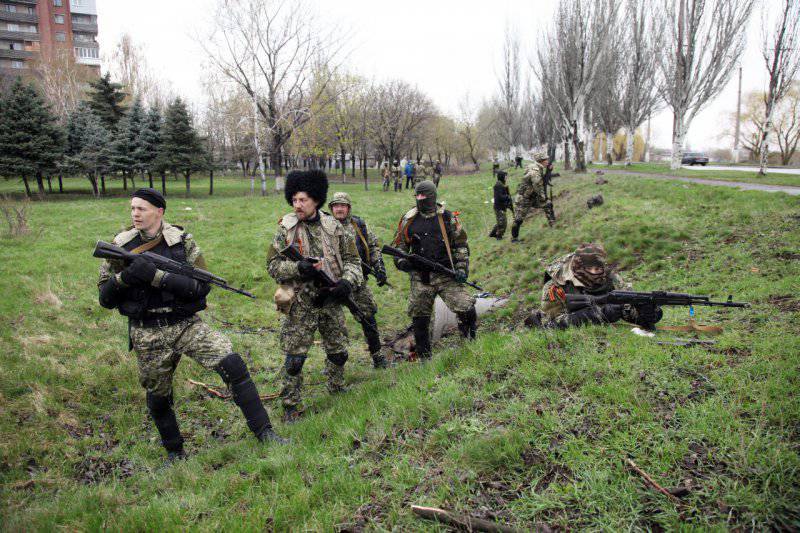 Now for the "hands of Russia". Russia is certainly interested in the fact that the illegitimate power in Kiev was overthrown and the Russian-speaking population gained more freedoms. Moscow diplomatically helps the rebels, it is possible that it provides logistical support. However, Russia's assistance is incomparable with the help of the West Maidan. Nobody invested billions of dollars in the southeast of 5.

Ukrainian media are subject to merciless censorship. Despite the fact that Avakov himself said that the 64 people detained in Kharkov are citizens of Ukraine, they continue to repeat nonsense about “Russian extremists”. They still do not hear this region.

What will oppose the illegitimate power, because the special forces constantly refuse to carry out criminal orders? How can they shoot at insurgents if there are thousands of unarmed protesters around them? In this case, they can only rely on neo-Nazis, who are jumping with shouts of “Moskalyaku to Gilyaku!” More specifically, these are primarily units of the army and special forces from Western Ukraine, as well as the “National Guard”, consisting of “militants” Maidan, who are barely able to distinguish the trigger from the shutter.

Instead of dialogue with people who demand only more rights for the regions in response to the challenges of the putschists and the injustices that they have spread, they proclaimed "a full-scale anti-terror special operation in the Southeast with the involvement of the army." In general, neo-Nazis do not care who to fight with. Thousands of victims will not stop them. But they will perfectly stop the Russian Tankstraveling around the center of Kiev, or attack aircraft, dropping "gifts" at the residence of the leaders of the Maidan. 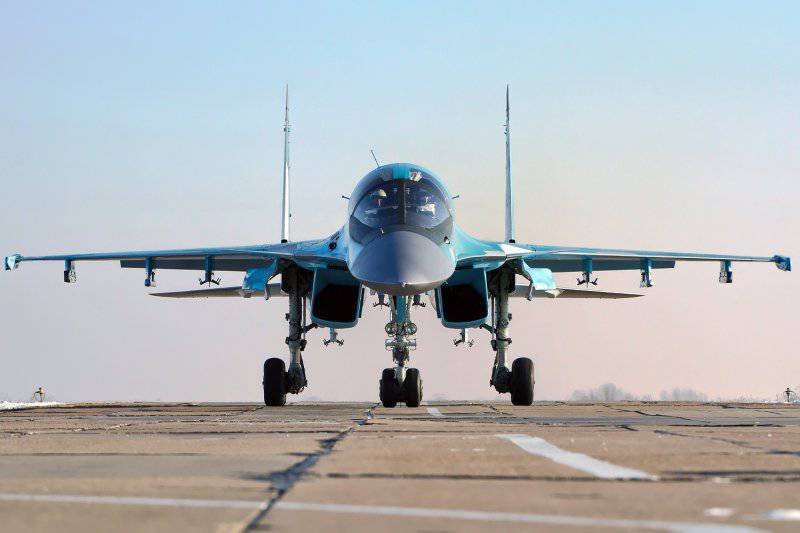 Russia is simply obliged to take harsh measures. Whatever the Ukrainian media may say about the “combat readiness” of the Ukrainian army, according to the results of mobilization per day, its losses amounted to: 5 T-64BV tanks, 1 Su-24M aircraft of the 7th tactical brigade aviation Ukrainian Air Force and 1 self-propelled guns 2S19 MSTA-S. In this case, people died ...

Russia has sufficient resources to reach Kiev within a week and fully control the entire Southeast, forming a corridor to Transnistria.

It is regrettable, but the division of Ukraine is inevitable. And it was not “Kremlin extremists” in the Southeast who began it, but neo-Nazis from Western Ukraine. Everyone has already forgotten that during the Maidan, it was the authorities in the western regions that declared disobedience to Kiev, and the residents of the western regions refused to pay taxes. Contradictions between the Southeast and the West have existed for decades. Over the last decade since the Orange Revolution, the red-black infection has begun to shift significantly to the center. At the moment, it has already largely covered Zaporizhzhya and Dnipropetrovsk regions.

Today it is not only about internal contradictions. Ukraine is located at the intersection of different worlds: Eastern and Western. In this case, in order to survive, it must be a strong player on the world stage, who is able to confront external challenges and conduct its own truly independent policy, have a strong army, and not be determined over the years with an external western or eastern course. Now the split can not be avoided ... The more it is delayed - the more blood will be shed. 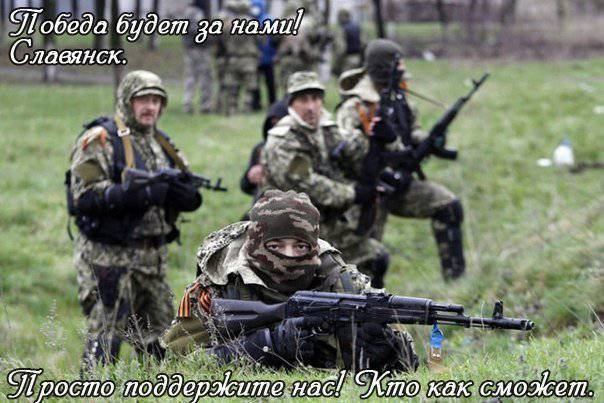 Unfortunately, the civil war has actually begun. There is not and will not be in Ukraine a war of “people and power” or a war of ““ patriots ”and separatists.” This is a war between the people and the people. One can only wish good luck in battle to those who struggle with neo-Nazism. The West, on its own stupidity, made a hot spot in the center of Europe. What can I say ... "Democracy" was a success ...

Ctrl Enter
Noticed oshЫbku Highlight text and press. Ctrl + Enter
We are
Situational analysis of the death of the MH17 flight (Malaysian Boeing 777), made on the basis of engineering analysis from 15.08.2014Results of the week. "God forbid to see Russian revolt, senseless and merciless!"
Military Reviewin Yandex News
Military Reviewin Google News
152 comments
Information
Dear reader, to leave comments on the publication, you must sign in.